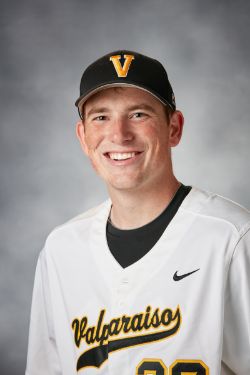 2015: Appeared three times out of the bullpen for Valpo in his sophomore campaign...fired a scoreless innings of relief against USC Upstate on March 6th...recorded a perfect side versus UIC (Apr. 17).

2014: Made five appearances as a redshirt freshman for the Crusaders...didn't allow a hit or earned run in 2/3 innings of work at Four Winds Field versus Notre Dame (Apr. 1)...threw an inning versus Kalamazoo (Apr. 21) where he surrendered an unearned run but struck out a batter.

Personal: Scott is the son of Martin and Cynthia Jerge...has two brothers (Michael and Eric) and a sister (Katherine)...favorite movie is The Departed...favorite baseball team is the Chicago Cubs...favorite food is deep dish pizza...favorite musical group is Florida Georgia Line...favorite baseball player is Tim Lincecum...majoring in finance...born on Oct. 27th, 1993.