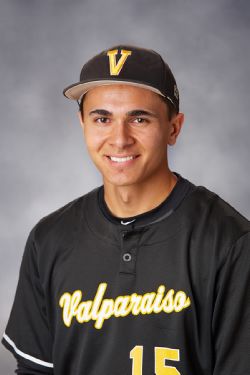 2016: Started in 52 games in his junior season with Valpo...an All-Horizon League selection at first base...finished the campaign as one of five Crusaders to finish with 40 RBIs or more...socked six dingers and cracked 12 doubles...amassed a .275 batting average coupled with a .342 on-base percentage...clubbed a two-bagger and a homer at Jacksonville State (Feb. 20) as part of a 2-for-5 afternoon that included two runs scored and three RBIs...crossed the plate twice in the series finale against the Gamecocks (Feb. 21)...enjoyed a strong two-game series against ULM (March 1-2) where he went 3-for-9 with a bomb, a double, four runs scored and four RBIs...had a hit and at least one run scored in every tilt of a three-game set at Louisiana Tech (Mar. 4-6)...helped lead Valpo a split against Wright State (Mar. 26), driving in a run and finishing the twinbill 4-for-6...reached base four times in five plate appearances in the second game of a doubleheader vs. Milwaukee (April 3), drawing a pair of walks and slugging two hits...rifled a three-run homer in an 11-0 rout at Oakland on April 16...tomahawked an RBI double at UIC on April 22...drove in two teammates at Northern Illinois (May 3)...lifted his batting average 22 points at Wright State (May 6) following a signature 4-for-4 contest that included two doubles, two walks, a run scored and three runs batted in...went 5-for-10 with two runs scored and five RBIs in a twinbill versus Youngstown State on May 13...followed that series up with another monster day against Oakland (May 15), where he homered, drove in four runs and crossed the plate five times during a 3-for-9 afternoon...racked up five doubles in a five-game stretch from May 20-26, including three against YSU to help the Crusaders finish the season on a five-game winning streak...scorched a double and a triple en route to a three-RBI day versus Northern Kentucky (May 25) in Valpo's opener in the Horizon League Championship...ripped a two-run double against UIC to help stave off elimination...collected two hits and a run scored in the Crusaders' remarkable 12-7 win over Milwaukee (May 27) to extend the season another day...went 1-for-4 in the season finale at Wright State (May 28).

2015: Enjoyed the biggest breakout campaign of any Crusader in 2015, starting 38 games until an injury derailed his season in late April...led the club in batting average (.329), home runs (7), runs batted in (39), hit by pitches (12) and slugging percentage (.579), tied for the team lead in doubles (15), and registered a perfect 1.000 fielding percentage...recorded two doubles, two RBI and scored twice in the second game of the season at San Diego State (Feb. 14)...went 5-for-9 with three doubles in a two-game set at Gardner-Webb (Feb. 27-March 1)...bested that effort the following two-game series at Western Carolina (March 2-3) when he drove in six runs, scored eight times, launched a homer and corked two doubles, lifting his average to .406 at the time...enjoyed one of the best single-game efforts in program history at USC Upstate on March 7, racking up seven RBI on two dingers and a two-bagger...continued his assault of the Spartans the next day with a three-run bomb...doubled and scored in the first two games of Valpo's Horizon League regular season-opening series at UIC (March 13-15) before going 2-for-2 with a round-tripper, three RBI and three runs scored in the finale at Curtis Granderson Stadium...scorched the Penguins in a three-game sweep of Youngstown State at Emory G. Bauer Field (March 20-22) to the tune of a 6-for-15, seven-RBI, three-run weekend...doubled and scored in a 7-2 win at Chicago State on March 25...walked and drove in two teammates at Ball State (March 31)...helped lead Valpo to a thrilling 11-10 win in 12 innings at Milwaukee with a 2-for-4 afternoon including a run batted in...drew two walks and plated a runner in the series finale at Henry Aaron Field on April 4th...accumulated eight runs scored, two homers, a double and three RBIs as part of a 6-for-11 series versus Oakland (April 10-12)...touched home twice and drove home a pair in the series opener at Oakland on April 24...registered a two-bagger and later scored in the final game of the series against the Golden Grizzlies (April 26)...slugged three hits in the Crusaders' 2-1 11-inning win over Chicago State (April 28).

2014: Appeared in 21 games for the Brown and Gold as a freshman, making 17 starts on the infield...got on base at a .292 clip, drove in seven runs and scored four in 61 at-bats...recorded a hit in each of his first three collegiate games at Samford (Feb. 14-16), including a two-run home run in the Sunday tilt...scored a run via a sacrifice fly at McNeese State (Feb. 28)...walked twice and scored a run at Texas A&M-Corpus Christi (March 8)...registered an RBI single at Chicago State on March 18th...drew a walk and ripped a run-scoring single at Northwestern (April 8)...delivered a pinch hit versus UIC (April 25)...earned a start the next day and rewarded the decision with a double and a HBP versus UIC (April 26).

Personal: One of five children, Nate is the son of Roger and Linda Palace...majoring in criminology and Spanish...born Sept. 24, 1994.