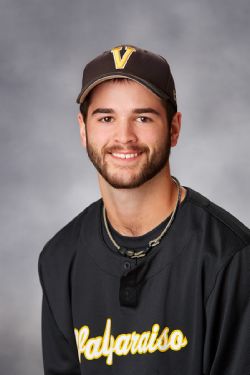 2015: Paced Valpo in saves with six while crafting a 2-0 record and a 3.86 earned-run average in 25 2/3 innings pitched during his junior season...fired three shutout innings over two games in Valpo's season-opening series at San Diego State (Feb. 13-15th)...earned his first save of the year on March 2nd at Western Carolina, recording the final two outs in an 8-7 tilt...was rewarded with a save following his 2 1/3 scoreless-inning appearance against Youngstown State (Mar. 21)...preserved a 7-6 win in the first game of a doubleheader against Wright State on Mar. 28th...tossed a career-high 4 1/3 innings, earning the win in the Crusaders' 11-10 12-inning win at Henry Aaron Field over Milwaukee on Apr. 2nd...closed the door on a 5-4 Valpo win over Oakland on April 11th...registered a six-out save versus UIC (Apr. 18th)...threw two perfect frames against Chicago State on Apr. 28th...notched his sixth save against Youngstown State (May 9), striking out a pair of Penguins and allowing a lone single in a 4-3 victory...walked just two batters all season opposite 13 strikeouts.

2014: Emerged as a huge weapon out of the Crusader bullpen in his sophomore campaign, serving primarily as a setup man...constructed a 3.20 earned run average to go with a 1-0 record in 17 appearances spanning 19 2/3 innings pitched...was the winning pitcher in the Crusaders' second victory of the season at Samford (Feb. 15) after throwing 1 2/3 perfect innings, collecting two strikeouts along the way...put together a stretch of five straight games from Mar. 2nd-Apr. 6th where he didn't allow an earned run...logged a season-high three innings on the hill versus UIC on Apr. 27th...preserved wins against Oakland (May 4) and Youngstown State (May 17) thanks to a scoreless inning of work in both tilts...closed out the season at the Horizon League Championship by striking out a Raider in 1 1/3 shutout innings of relief against Wright State (May 23).

2013: Made eight relief appearances for the Brown and Gold as a freshman...didn't allow his a run in his first four appearances including one shutout inning against South Florida (Mar. 10) and two scoreless frames versus Navy (Mar. 13).