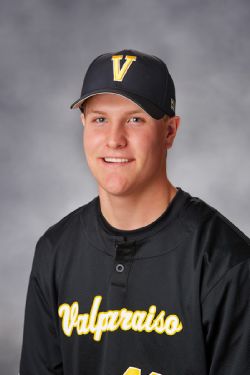 2015: Logged 93 2/3 innings over 14 starts in his junior season with the Crusaders...led the rotation in ERA (3.85), strikeouts (94), shutouts (2), and tied for the team lead in wins (5)...accumulated the most strikeouts by a Valpo pitcher since Bryce Shafer's 121 in 2010...was named the Horizon League Preseason Pitcher of the Year in February...allowed just one earned run in six innings in the season opener at San Diego State (Feb. 13)...punched out a season-high 10 Runnin' Bulldogs at Gardner-Webb (Feb. 27) over 6 1/2 innings of two-run ball...took the loss at UIC (Mar. 13) in a start in which he racked up seven Ks opposite one walk in 6 1/3 innings...earned his first win against Youngstown State on Mar. 20th after striking out nine batters (no walks) in seven strong frames...defeated Wright State (Mar. 28) thanks to a seven-inning performance where he yielded one earned run on five hits, striking out nine and walking just a pair...did not factor into the decision at Milwaukee (Apr. 3) when he tied a season-high in strikeouts with 10 without walking a batter...went the distance against Oakland (Apr. 10) for his third win of the season, again piling up 10 strikeouts while allowing only one earned run on nine hits...went six innings versus UIC (Apr. 17), fanning five Flames...saved his most dominant start of the season for Milwaukee (May 1) where he shut the Panthers out, scattering three hits, walking only one, and striking out five...took a tough-luck loss versus Youngstown State (May 9) after limiting the Penguins to two earned runs over seven frames, but logging seven Ks...suffered a similar fate in Dayton as he was tagged with a loss following a 7 1/3 inning outing allowing two earned runs on seven hits to Wright State (May 14)...capped off the season with his second shutout, eliminating the Youngstown State Penguins (May 20) via a 141-pitch masterpiece in which he punched out seven Penguins, and scattered seven hits...earned Horizon League Championship All-Tournament Team honors...was named Horizon League Pitcher of the Week on May 4th...will enter his senior season needing 77 1/3 innings pitched to become Valpo's all-time leader in innings pitched, 90 strikeouts to move into 2nd place all-time, and four wins to secure sole possession of 4th place all-time in wins.

2014: Made 11 starts in a dazzling sophomore campaign for Valpo...named Horizon League Co-Pitcher of the Year after recording a 1.94 earned run average, a 1.02 WHIP (walks-plus-hits per inning pitched)...finished 68th in the country in complete games (3), 57th in ERA, 60th in wHIP, 28th in strikeout-to-walk ratio (5.42), and 31st in walks allowed per nine innings pitched (1.30)...delivered a seven-inning shutout at Texas A&M Corpus-Christi on March 8th, earning his first victory of the season...struck out three UIC Flames in 7 2/3 innings of work on March 22nd...sent all six Butler Bulldogs he faced back to the dugout in a two-inning tune-up on March 30th...turned in quality starts over each of his final eight starts of the season...blanked Wright State over seven frames, stirking out six Raiders and allowing just six hits (Apr. 5)...surrendered just one unearned run on four hits while striking out nine opposite one walk in eight solid innings versus Youngstown State (Apr. 12)...stuck with a tough-luck loss at Milwaukee on Apr. 18th, when he allowed three runs in eight innings, a start in which he didn't walk a batter but struck out five Panthers...saw much of the same his next start, as he yielded just two runs in seven innings versus UIC in a 5-1 loss...threw a complete game versus Oakland on May 3rd, allowing one run on five hits, while punching out eight batters but took the loss in a 1-0 duel...struck out six batters in 6 2/3 innings and surrendered just two earned runs in a no-decision at Wright State (May 10)...notched the win at Youngstown State on May 16th, posting eight innings, seven hits, two earned runs, no walks and strikeouts in a 5-3 victory over the Penguins...came within a strike of his first career 9-inning shutout versus Oakland in the Horizon League Tournament, but settled for 8 2/3 shutout innings where he yielded just six hits and two walks while striking out nine batters in a 2-0 season-saving triumph over the Golden Grizzlies.

2013: Appeared in 14 games including 11 starts for the Brown and Gold as a freshman...earned his first collegiate win after hurling seven innings of one-run ball versus Navy on March 13th...shutout Notre Dame for seven innings on Apr. 3rd...notched the win over #9 Arizona State after working 6 2/3 innings...defeated Wright State (Apr. 27) after striking out six Raiders in seven frames...didn't allow an earned run in five innings of work in fourth win versus Youngstown State (May 18)...turned in one of the most efficient starts of the season versus Wright State in the Horizon League Tournament Championship Game (May 26) when he allowed just two hits, no walks and struck out six in eight shutout innings...surrendered just two earned runs in 6 2/3 innings in the NCAA Regional Game versus Austin Peay (Jun. 2)...finished the season 5-1 with a 3.73 earned run average striking out 46 batters and walking just 22 in 72 1/3 innings pitched...named to Horizon League All-Tournament Team.