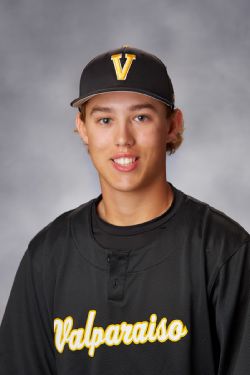 2015: Made 14 appearances on the hill for Valpo in his first season including six starts...made his collegiate debut at San Diego State (Feb. 14)...didn't allow an earned run in two innings of relief at Gardner-Webb (Feb. 28)...struck out two Catamounts in his first career start at Western Carolina (Mar. 3), a game which Valpo eventually won 18-5...fired a scoreless inning of relief at Curtis Granderson Stadium in Chicago versus UIC on March 14th...took a tough-luck loss at Indiana (Mar. 17) after allowing two earned runs in six innings at Bart Kaufman Stadium in just his second start of the season...earned his first collegiate win on March 21st versus Youngstown State after limiting the Penguins to just one run in 3 1/3 innings...tossed 2 1/3 perfect innings at Oakland while punching out two Golden Grizzlies on April 24th...stymied the Chicago State offense to one run over seven brilliant innings, striking out six and walking just one on April 28th, his longest start of the season...did not walk a batter, but yielded two earned runs in four innings versus Western Michigan (May 5).

Prep: A three-time letterwinner for Jim Clark and the Lions...announced as a First Team All-North Coast League, First Team News-Herald selection in 2014...earned All-Ohio accolades as senior...pitched in the 2014 State Semifinal game after capturing a Regional championship...was a key part of the 2013 District Championship team, a season in which he was named Second Team All-Conference and Second Team News-Herald.