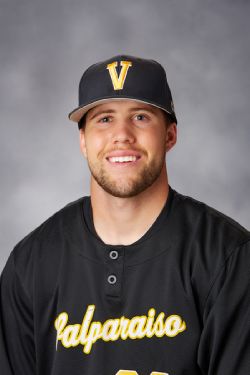 2015: Appeared in 26 games including 22 starts behind the plate for the Crusaders...scored a run in Valpo's season opener at San Diego State (Feb. 13)...collected his first hit of the season the following day while crossing the plate...went 1-for-3 in the series opener at Gardner-Webb (Feb. 27)...drew two walks the next day at Gardner-Webb...walked and tallied his first RBI of the season in Valpo's 15-1 rout of UIC at Curtis Granderson Stadium on March 15th...enjoyed a 3-for-10 series with three runs scored, a run batted in, and a walk versus Oakland (Apr. 10-12)...recorded a single at Western Michigan (Apr. 14)...smacked a hit and touched home in the first two tilts of the home Milwaukee series (May 1-3)...walked twice and had a hit versus Western Michigan (May 5)...notched a hit versus Youngstown State on May 9th.

Prep: A two-year letterwinner for the Spartans under head coach David Jeans...won the North Coast Section Championship as a junior before making it to the Section Championships the following season...went 39-15 in his two years at the varsity level...was named Defensive Player of the Year and All-East Bay Athletic League in 2013...was a honors student at De La Salle High where he achieved a 3.5 grade point average or higher all four years...also lettered on the 2011 California State Championship football team.

Personal: Ray is the son of Ray and Meri Bartolomucci...major is business management...born on June 4th, 1994.