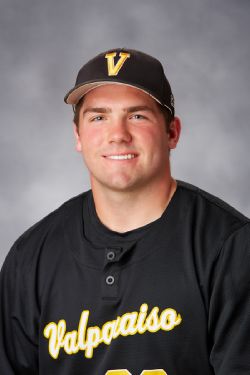 2015: Played in 37 games including 35 starts in his first season with the Brown and Gold...compiled the fifth-highest on-base percentage (.390) of any Crusader...was hit by a pitch and scored in his Valpo debut at San Diego State on Feb. 13th...collected his first hit as a Crusader the following afternoon...walked and cracked a double as part of a three-RBI afternoon in Valpo's 15-1 thumping of UIC (Mar. 15) at Curtis Granderson Stadium...drove in a run and touched home in a 7-2 win at Chicago State on March 25th...launched a dinger and scored a season-high four runs at Milwaukee (Apr. 2)...accumulated three runs batted a day later at Henry Aaron Field during a 2-for-5 afternoon...walked three times in the series finale in Milwaukee (Apr. 4)...enjoyed a 5-for-14 series with two runs, two RBI, a walk, and a stolen base versus Oakland (Apr. 10-12)...slugged a two-run single against UIC on Apr. 18th...went 1-for-2 with a pair of walks and a run scored versus Milwaukee (May 1)...rifled a double, picked up an RBI, scored, and walked at Wright State (May 16)...walked and doubled as part of a two-hit tilt versus UIC in the Horizon League Championship (May 21)...finished out his inaugural season at Valpo with a 1-for-3 afternoon including a walk and an RBI versus Milwaukee (May 21).

Des Moines Area C.C.: Put together back-to-back .410+ OBP seasons for the Bears as a starter...named Second Team NJCAA Region XI...led the team in walks in 2014...was teammates with Ryan Fritze.

Prep: A four-time letterwinner for Marty Nelson and the Warriors...was a member of National Honor Society...also lettered twice in basketball.

Personal: Shea is the son of Tim and Lisa Molitor...has a twin brother, Blake, who plays baseball at Illinois State...no relation to Paul Molitor...majoring in sports management...favorite movie is Miracle...favorite baseball team is the Minnesota Twins...favorite place to eat is Chipotle,..favorite musical group is Kid Ink...favorite baseball player is Derek Jeter...hobbies outside of baseball include the lake life and eating.