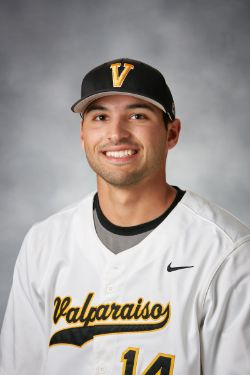 2017: Appeared in 17 games out of the Valpo bullpen and amassed a 5.25 ERA while going 2-1 and issuing nine walks against 14 strikeouts in 24 frames... Did not allow a run in his final five appearances of the season, yielding just one hit over six innings.

2016: Made 16 appearances out of the Crusader bullpen in his first season in the Brown and Gold...collected a 1-0 record to go with a 5.47 earned-run average... was the unsung hero in the Crusaders' 12-7 thriller over Milwaukee in the Horizon League Championship, as he entered the second inning of an elimination game down 6-0 and blanked the Panthers over three innings while the offense assembled a remarkable late-inning comeback.

Prep: A four-year letter winner for the Steve Costea-led Eagles...integral part of a team that went 69-17-1 and racked up three District championships (2011, 2013, 2014) in his four years...earned First Team All-Laurel Highlands Athletic Conference honors his senior year...was the District 5's Preseason Player of the Year heading into his senior season...also earned four letters in basketball...member of National Honor Society.

Personal: Alex is the son of Luigi and Elizabeth Dirienzo...has a twin brother, Ross, and a sister, Mia...favorite food is wings...favorite movie is Gladiator...favorite musical group is Tame Impala...favorite baseball team is the Pittsburgh Pirates...favorite baseball player is Andrew McCutchen...hobbies outside of baseball include playing the guitar, ping pong, video games and basketball...majoring in sociology/criminology.