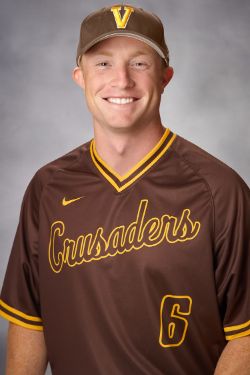 Ben Wolgamot was named Valpo's assistant coach and recruiting coordinator in September of 2013.

The Valpo offense has enjoyed a significant statistical uptick over the last four seasons under Wolgamot. In 2018, Valpo had 100 doubles or more for the third straight season after previously having just one 100+ double season since 2001 (118 in 2010). Wolgamot was the hitting instructor for a 2018 team that ranked in the Top 5 in program history in doubles (107, fifth), home runs (41, fifth) and walks (248, third). The home run total was Valpo’s highest since 2002, the team’s .973 fielding percentage set the program record for the second straight year and the .404 team slugging percentage was Valpo’s best since 2010.

Wolgamot came to the Crusaders after a two-year stay at Eastern Illinois University as assistant coach/recruiting coordinator. Wolgamot played collegiately at Danville Area Community College (Ill.) from 2006-2007 before joining the Purdue Boilermakers in 2008-2009. In addition to batting .400 in his final season at Danville, Wolgamot earned both Easton Defensive Player of the Year accolades and a Rawlings Gold Glove Award. He continued his excellence on the field at Purdue where he was named a First Team All-Big Ten second baseman in 2008.

Wolgamot earned a bachelor's degree in health and fitness from Purdue University in 2010.

He returned to Danville Area C.C. in 2010 as an assistant coach before he served in the same capacity at Wabash College in 2011. After a season at Wabash, Wolgamot joined the Eastern Illinois coaching staff.