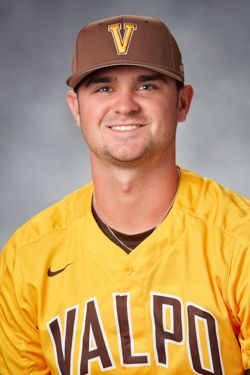 2018 (Purdue): Academic All-Big Ten honoree... Logged 20 innings and compiled a 4.95 ERA over 12 appearances out of the Boilermaker bullpen… Nailed down the save on May 8 vs. Fort Wayne.

2017 (Purdue): Academic All-Big Ten selection… Pitched in 12 games and made eight straight weekend starts from March 12 to May 7… Helped lead Purdue to wins in series finales vs. Santa Clara, Ohio State and Illinois… Worked a combined 10 2/3 innings of four-hit ball in the OSU and Illinois victories, helping Purdue win a rubber game in Columbus and sweep the home series vs. the Illini… Pitched in relief the first three weekends in his return to the mound for the first time since March 2015… Returned to the weekend rotation on the spring break trip, giving up a combined two earned runs over 7 1/3 innings vs. Cal State Northridge and Santa Clara… Struck out a career-high five over five innings of two-run ball in the rubber game of the conference-opening series at Iowa… Was Purdue's most effective pitcher in the hitter-friendly series finale with Indiana, working 4 1/3 innings of four-run ball in his first start at home since 2015… Struck out four in two innings of scoreless relief over two appearances in the series-opening series at Texas State.

2016 (Purdue): Academic All-Big Ten… Played in 11 games as a position player, making three starts, before opting to undergo an arm surgery in late March that ended his season… Started the first two games of the season at designated hitter after being strictly a pitcher as freshman… Also started the series finale vs. Ohio at third base… Singled and scored twice in the comeback win at Georgia State… Played third base in all three games of the Ohio series, recording a single in the 15-inning win… Recorded an RBI in the finale of a series against Cal.

2015 (Purdue): Pitched in six games, starting all six, before an injury in late March ended his season… Granted a medical redshirt… Was Purdue's series-opening starter in all six of his outings… Gave up just one run on three hits over 5 1/3 innings to earn the win in the opener at Oklahoma… Worked 5 2/3 shutout innings in a no-decision vs. Butler… Pitched a season-high six-plus innings against Northern Illinois, two of the four runs he was charged with scoring in the seventh after he left the game… Surrendered no more than one run in any of his first three starts after working two innings of one-run ball in his collegiate debut vs. Texas A&M-Corpus Christi and 3 1/3 innings vs. Gonzaga… Left the Big Ten opener against Rutgers with two outs in the fifth inning with Purdue leading 3-2… Became the rare freshman to start a Big Ten opener on the mound for Purdue under previous head coach Doug Schreiber… Surrendered only five extra-base hits in 27 innings

Prep: Four-year varsity letter winner for coach Pete Lotus at St. Laurence High School in the south suburbs of Chicago… Catholic League Player of the Year as a senior after batting .417 and posting a 9-1 record with 88 strikeouts on the mound… Two-time all-state and First Team All-Catholic League as an upperclassman… Batted .429 with an 8-1 record, 82 strikeouts and 0.97 ERA on the mound as a junior to earn Area Player of the Year honors from the Southtown Star newspaper… The three-time all-area honoree was Second Team All-Catholic League in each of his underclassman seasons… Established new school records for games played, hits, RBI, runs scored and strikeouts… Batted .405 and went 5-1 as a starting pitcher as a sophomore… Batted .397 as the starting second baseman as a freshman playing varsity… Also played three years of basketball, earning offensive team MVP honors as a junior after averaging 14 point per game… Defensive team MVP as a sophomore playing varsity… Helped lead St. Laurence to four straight regional titles in the IHSA playoffs… Honor roll student graduated with a 4.0 GPA… Also played basketball and was a three-year letter winner… Played travel ball with the Illinois Sparks from 2005-2014.

Personal: Received his undergraduate degree in organizational leadership… Son of Dean and Debbie Kornacker… Family also includes older siblings Lauren and Mark… Father was drafted by the San Francisco Giants and reached the Double-A level after being a standout performer in college at Saint Xavier in Chicago… Brother Mark played baseball at Lewis University in Romeoville, Illinois, where his mother is a professor of nursing… Sister Lauren is a nurse practitioner in Tampa…. Born on Dec. 26, 1995… Pursuing a masters in sports administration… Hobbies include vacations, fishing, golfing and Netflix… Favorite food is steak, pro team is the Chicago Cubs, movie is The Dark Knight, MLB player is Anthony Rizzo and TV show is Seinfeld.