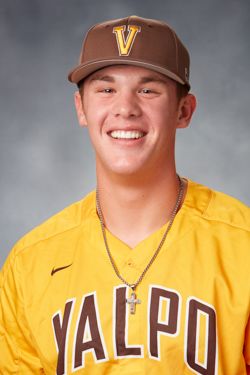 2020: Pitched in three games out of the Valpo bullpen during the COVID-19 shortened season… Struck out four while yielding just two hits over three innings… Worked a scoreless inning on Feb. 16 at Western Kentucky and did not permit a run in 2/3 of an inning on Feb. 29 vs. Southern Miss.

2019: Appeared in 10 games spanning 10 innings during his first year at Valpo… Was the winning pitcher in Valpo’s dramatic victory over UNCW on March 3, the first decision of his Valpo career… Worked a scoreless inning on March 22 vs. Butler… Allowed one run but it was unearned in his inning on March 26 at Purdue.

Heartland (2018): Was an NJCAA All-Academic first team honoree and a member of Phi Theta Kappa Honor Society… Finished the season with a 3.70 ERA and 2-1 record in 24 1/3 innings over 10 outings.

Bradley (2017): Member of Bradley Athletic Director’s Honor Roll both semesters on campus… Also a member of the 2017 MVC Honor Roll… Picked up a win on April 19 against Iowa…. Logged 8 2/3 innings and made six appearances.

Prep: First-team all-conference and second-team all-state honoree… member of Jesuit Honor Society… Was a second-team all-state performer and helped the Hilltoppers to a state tournament runner-up finish ... Posted a 7-1 record with a 2.66 ERA in his 11 mound appearances, while also batting .302 with two home runs and 27 RBIs ... Suffered a dislocated elbow 10 days before the start of his junior season, but returned to the diamond in six weeks (rather than the projected six months), to help his team down the stretch… Played travel ball for the PoundTown Wreckers (2013-2015) and Prospect Training Academy (2016)… Won two varsity letters in baseball and one in football.

Personal: Son of David and Carolyn Jarecki… Born March 22, 1998... Has two younger brothers, Jack and Joe... Two uncles and a grandfather were collegiate student-athletes, including one uncle, Jim Kovach, who went on to play linebacker for seven years in the NFL with New Orleans (1979-85) and San Francisco (1985)… Majoring in accounting… Favorite food is chicken Alfredo, pro baseball team is the Milwaukee Brewers, musical group is Brothers Osborne, movie is Miracle, MLB player is Max Scherzer and TV show is The Office.