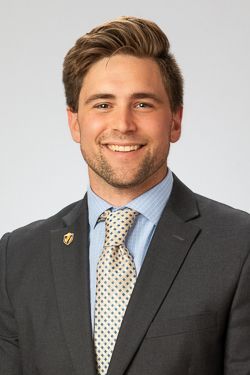 Jackson Smith has joined Valpo's staff for the 2020 season after he previously worked on the staff at Elmhurst College, where he served in a variety of capacities over the last three seasons. He instructed Sam linebackers in 2017, the defensive line in 2018 and outside linebackers and defensive ends in 2019.

Smith’s playing days at Elmhurst spanned from 2012-2016, culminating with a year as a team captain as a senior. He earned his bachelor of science in May 2017 and is expected to finish his master of business administration in May 2020 at Elmhurst.

What They're Saying About Coach Smith

“Jackson is extremely intelligent and hard working. He coaches football for the right reason, which is to develop student-athletes in a positive manner. Jackson has a bright future and will be a valuable asset for Valpo Football.” -Nathan Bell, Aurora University Associate Head Coach

“Coach Smith is a young and upcoming coach who has a fiery passion for the game of football. He not only works hard on the field, but he is also a very strong recruiter and relates with the players well. Valpo got a great one.” -Jordan Huxtable, Rutgers Defensive Quality Control

“Coach Smith is an extremely hard working, knowledgeable and loyal coach. He is very focused on being an extremely effective coach, recruiter and a mentor for student-athletes. Throughout his time at Elmhurst, he forged great relationships with coaches and student-athletes and will be a great asset to any coaching staff that he is a part of.” -Glen Brittich, Elmhurst College Assistant Director of Athletics