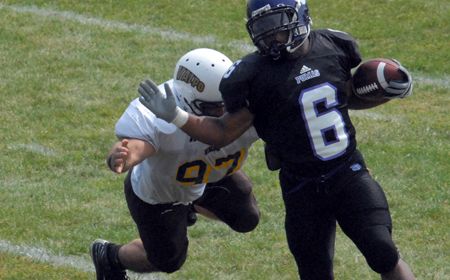 Nikko Carson (Homer Glen, Ill./Lockport Township H.S.) led Valparaiso with four sacks and the Crusaders got to Drake quarterbacks seven times on the afternoon, but in the end it was the Bulldogs that posted a 34-14 victory over Valpo in the Brown and Gold’s Pioneer Football League opener on Saturday afternoon at Drake Stadium in Des Moines, Iowa.

Valpo’s defense kept the Crusaders in the game in the opening quarter.  Drake started three drives in Valpo territory, yet came away with just 10 points.  A 10-yard touchdown pass from Mike Piatkowski to Frank Pucher started the scoring and Brandon Wubs added a 42-yard field goal with 1:07 left in the quarter as the Bulldogs led 10-0 after one.

The Crusaders answered with a 61-yard scoring drive of its own to cut the deficit to three.  Bobby Wysocki (Calumet City, Ill./Thornwood H.S.) found Nicholas Henton (Chicago, Ill./De La Salle H.S.) along the sidelines and the fifth-year senior made the grab and tip-toed into the end zone for a touchdown from 12 yards out to make it 10-7.

Drake added 17 unanswered points before intermission to take a 27- lead into the break.  A 39-yard pass by Piatkowski to Joey Orlando and a three-yard run by the quarterback accounted for the two Bulldog touchdowns.  Field position proved to be a difference in the first half, as Drake started on average at its own 45-yard line in the first 30 minutes.

“We need to come out with a quicker start,” Adams added.  “We need to be more fundamentally sound.”

Valpo’s defense came out strong in the third quarter, holding the Bulldogs to just 17 total yards and four three-and-outs.  The Crusaders looked to cut into the lead early in the fourth quarter, driving to the Drake 21 before failing to convert on fourth down.

“In the second half we played really well defensively,” Adams concluded.

The Bulldogs added a touchdown with 4:29 to play in the game on a four-yard run by Tom Kostek to make it 34-7 before the Crusaders added one late score.  Nate Goergen (Golden, Colo./Golden H.S.), making his Valpo debut, led the Crusaders down field and found John Popper (Dublin, Ohio/Coffman H.S.) from four yards out on fourth-and-goal with 36 seconds remaining for a touchdown.

Valparaiso (1-3, 0-1) will return home next Saturday afternoon for the Crusaders’ annual Homecoming game as the Brown and Gold hosts San Diego in PFL play.  Kickoff is set for 1 p.m. at Brown Field with all the action carried live on the Valpo Sports Radio Network.

Game Notes: Redshirt-junior Adrian Gober (Merrillville, Ind./Merrillville H.S.) made his first career start at cornerback ... Drake leads the all-time series 14-3, including an 8-0 edge in Des Moines … Valpo was 1-of-2 on fourth downs and is now 5-of-6 (83.3%) on the season … Drake averaged starting drives on its own 42 yard-line compared with Valpo starting on its own 23 … Henton’s touchdown catch was his first since 2007 … Goergen’s touchdown pass was the first of his career … Valpo’s defense finished the game with 10 tackles for loss.