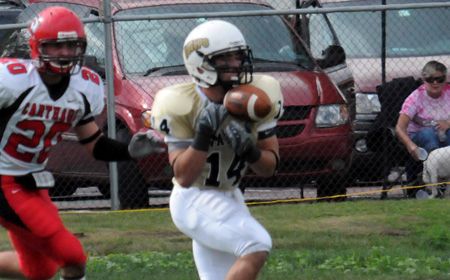 Valparaiso began its final road trip of the 2009 season on Saturday afternoon, suffering a 24-0 setback to Marist in Poughkeepsie, N.Y.

Valpo’s defense led the way throughout the first half keeping the game close.  JaVon Welch (Grand Rapids, Mich./Ottawa Hills H.S.) ripped a ball away from a Marist receiver for an interception in the opening quarter and the Brown and Gold made four tackles for loss in the opening 30 minutes.

Offensively the Crusaders moved the ball in the first half, only to have two drives stopped inside of the 30-yard line, one because of a fumble and another on a blocked field goal.

“Early in the game our defense kept us in the game,” head coach Stacy Adams said.  “Offensively though we need to generate offense and come away with points when we have the opportunity.”

Marist finally got on the scoreboard with 33 seconds remaining before halftime as Chris Debowski found Chris Ortner open in the end zone from five yards out to give the Red Foxes a 7-0 lead at the break.

Valpo outgained Marist 107-91 in the first half, holding the Red Foxes to just 29 yards passing and five first downs.

“For 29 minutes we went toe-to-toe with a good team both offensively and defensively,” Adams added.  “We had them outgained and our defensive kept giving us opportunities.”

The Red Foxes added to the lead on the opening possession of the third quarter as O’Neil Anderson scored from seven yards out to make it 14-0 Marist.  Just 1:45 later, following a Crusader interception, Debowski found James LaMacchia from 48 yards out to make it 21-0.  Marist would add 28-yard field goal before the end of the third quarter and that would close out the scoring for the game.

“Coming into the game we felt good about what we could do,” Adams added.  “We have to come out and play a better second half though.  If we play the same way we did in the first half it is a different ball game.”

Debowski finished  6-of-9 passing for 114 yards and two touchdowns for the Red Foxes while Anderson  on 15 carries and a score. rushed for 101 yards

Bobby Wysocki (Calumet City, Ill./Thornwood H.S.) was 10-of-25 passing for 73 yards while Issac Wildermuth (Sidney, Ohio/Upper Arlington H.S.) had 16 carries for 34 yards to lead the ground game.  Welch had a team-leading 12 tackles in addition to the interception to lead the defense.

Valparaiso (1-7, 0-5) will close out the road portion of the regular season next Saturday in Jacksonville, Fla.  Kickoff is set for 12 p.m. CST. against the Dolphins of Jacksonville.

Game Notes: This was the first meeting ever between Valpo and Marist … Welch’s interception was the first of his career … Cody Gokan (Mundelein, Ill./Mundelein H.S.) had a career-high 10 tackles.