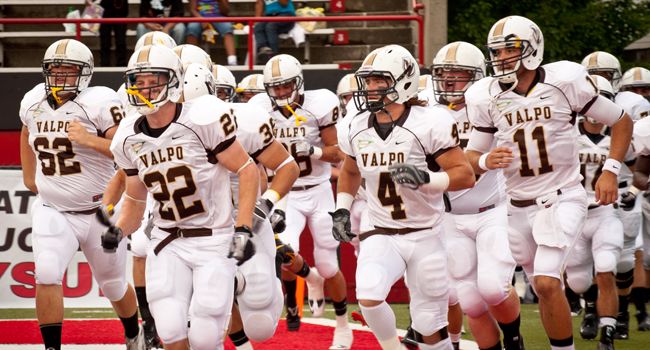 This Week in Crusader Football: The Battle for the Hoosier Helmet will take place on Saturday afternoon as Valparaiso heads south to Indianapolis, Ind. to take on longtime rival Butler.  The two schools first met in 1927 and the Crusaders have faced the Bulldogs more than any other school in program history.

Head Coach Dale Carlson: Dale Carlson is 0-16 in his second season with the Crusaders and 110-119-3 overall entering his 23rd season as a collegiate head coach.  He arrived at Valpo from Ohio Dominican where he began the Ohio Dominican program from scratch in 2004, just as he did at Tri-State University prior to his tenure with the Panthers.  He is the 16th head coach in Valpo history, and just the seventh since 1946.

Series Notes: Valparaiso and Butler first met in 1927 and will be meeting for the 70th time on Saturday afternoon.  The Bulldogs hold a 45-24 advantage all-time between the two schools and have won the last three meetings between the two schools.  Last year at Brown Field Butler posted a 48-0 victory over the Brown and Gold.  Valpo’s last win in the series came on Oct. 13, 2007, a 42-37 triumph at Brown Field.

Wrapping Up San Diego: The Toreros jumped out to a 28-0 lead at halftime and added the game’s final 20 points on the way to a 55-14 victory over Valparaiso last Saturday at Brown Field.  San Diego recorded 603 yards of total offense.  Kenny James rushed for 207 yards and three scores for the visitors.  Eric Hoffman threw for two touchdowns, one to Gabe Ali-El and another to Kelvin Smarwt, to lead the Valpo offensive attack.  The Crusaders finished with 307 total yards of offense.

Scouting Butler: The Bulldogs have alternated wins and losses this season and are coming off of a 38-23 setback last Saturday at Campbell.  This is the first of three straight home games for the Bulldogs.  Quarterback Andrew Huck has completed 66.3% of his passes this year for 1,701 yards and 13 touchdowns on the season.  Trae Heeter has carried 92 times for 496 yards while Zach Watkins is the team’s leading receiver with 47 grabs for 568 yards.  Jordan Ridley leads Butler with 72 total tackles, including four for loss this year.  He ranks fifth nationally averaging 12 stops per game.

Crusaders Look to Reclaim Helmet: This year’s edition of the Valpo-Butler rivalry also marks the sixth installment of the “Battle for the Hoosier Helmet.”  Started in 2006, the trophy goes to the winner of the annual game between the two longtime Indiana rivals.  Butler has claimed four of the previous five trophy games with Valpo keeping the hardware in 2007 following a 42-37 win over the Bulldogs.

Ali-El Shows He Can Catch Too: Coming off of his best rushing game of his brief collegiate career against Morehead State on Oct. 1, Gabe Ali-El showed off his receiving skills last Saturday against San Diego.  The freshman running back made five grabs for 118 yards, including a 75-yard touchdown reception from Eric Hoffman.  The receiving effort was the first 100-yard receiving day by any Crusader this season.  In that game two weeks ago against Morehead State, Ali-El carried 12 times for a season’s best 67 yards, averaging 5.6 yards per rush.

McCarty Nearing 1,000 Career Yards: Sean McCarty made a pair of catches last Saturday, including one to help set up Valpo’s first touchdown, while continuing to move closer to 1,000 yards receiving for his career.  The fifth-year senior enters Saturday’s game against Butler with 956 receiving yards.  This year his 190 receiving yards lead the Brown and Gold.

Wood Launches Punt After Punt: Junior punter Greg Wood had a stellar Saturday last week against San Diego.  His first punt of the day went a career-long 76 yards, bettering his 71-yard effort one year ago.  Wood followed that kick up with 52 and 64-yard punts in the first half.  For the day he ended with four punts of more than 50 yards, averaging 50.3 yards per kick.  He did not have a touchback.

Derbak in the Backfield: Pat Derbak recorded 2.5 tackles for loss among his seven total tackles last week against the Toreros.  He leads the Crusaders with four stops in the backfield this season and is also Valpo’s top tackler overall with 41 total.  Derbak ranks third in the Pioneer Football League averaging 8.2 tackles per contest.

Gridley Pounces on the Football: Cole Gridley recovered a San Diego fumble last week and returned the loose football six yards.  It was the sophomore’s second career fumble recovery after also falling on a loose football in the season finale at Morehead State in 2010.

Sharing the Wealth: Ten different Crusader receivers caught passes last week against San Diego, with Ryan Lehr making his first catch of the season.  On the season, 16 different Valpo players have caught at least one pass, with 13 of the 16 having at least two receptions on the year.

Passing Offense Among Nation’s Leaders: Valparaiso ranks 27th among all NCAA I-FCS schools averaging 256.0 passing yards per game this season.  Crusader quarterbacks have completed 53.3 percent of their passes this season for 1,280 yards in five games.

A Strong Leg: Greg Wood, a First Team All-Pioneer Football League punter one year ago, is averaging 43.6 yards per kick over his 43 punts this season and ranks 10th among all NCAA I-FCS punters.  The junior had a long of 71 yards against San Diego, and has already has 10 50+ yard kicks on the season.  He has landed 10 kicks inside of the 20-yard line for the year.  For his career Wood averages 43.6 yards per punt.  Wood has had at least one 50-yard punt in 13 of his 15 collegiate games.

Behaving Themselves: Valpo leads the PFL averaging just 36.8 yards in penalties per contest.  The Crusaders have been whistled for infractions just 24 times (4.8 per game) this season for 184 total yards.  There is no other team in the PFL averaging less than 40 yards per game in miscues.

Racking Up the Offense: Valpo tallied 463 yards of total offense in the season opener against Franklin, marking the Crusaders’ highest offensive output since the Brown and Gold rolled up 469 yards at Drake on Sept. 29, 2007.

This and That: Valpo is 7-of-12 on fourth down conversions this season ... Tanner Kuramata leads the Crusaders with 18 catches on the year ... Kelvin Smawrt leads Valpo with 622 all-purpose yards ... 66 different players have seen the field this season with 36 earning at least one start.