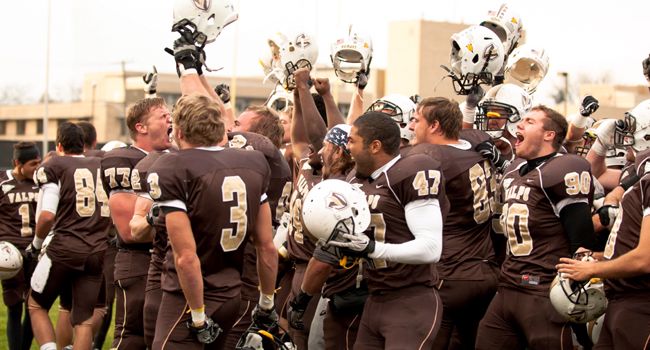 This Week in Crusader Football: Valparaiso wraps up the 2011 season on Saturday afternoon as the Crusaders travel to Davidson, N.C. to battle the Wildcats of Davidson College.  The Crusaders are looking to continue the momentum that the team garnered last Saturday with their 34-31 victory over Campbell in the  home finale.

On the Air: For the seventh straight season the Valpo Sports Radio Network will be home to all 11 Crusader football games in 2010.  The Valpo Sports Radio Network consists of WAKE (1500-AM, Valparaiso), which will carry every game all season long along with WJOB (1230-AM, Hammond), which will carry select games.  Keaton Gillogly will handle all the play-by-play with Ryan Wronkowicz adding the color commentary this week.  The game can also be heard live online at valpoathletics.com.  Stats will also be available for the game through valpoathletics.com.

Head Coach Dale Carlson: Dale Carlson is 1-20 in his second season with the Crusaders and 111-123-3 overall in his 23rd season as a collegiate head coach.  He arrived at Valpo from Ohio Dominican where he began the Ohio Dominican program from scratch in 2004, just as he did at Tri-State University prior to his tenure with the Panthers.  He is the 16th head coach in Valpo history, and just the seventh since 1946.

Wrapping Up Campbell: Eric Hoffman’s nine-yard touchdown pass to Gabe Ali-El with 3:09 to play put Valpo on top for good last Saturday afternoon as the Crusaders posted a 34-31 Senior Day victory over the Camels at Brown Field.  Hoffman threw for 317 yards and four scores while Ali-El also added a rushing touchdown.  Ali-El rushed for 69 yards and added another 90 receiving.  Valpo registered 399 yards of offense on the day and the defense made enough big stops down the stretch to offset 427 total yards by the Camels.  Cole Gridley led the Valpo defense with 12 tackles.

Scouting Davidson: The Wildcats picked up their first Pioneer Football League victory of the season and snapped a six-game losing streak last Saturday with a 28-24 win over Morehead State at home.  Quarterback Jonathan Carkhuff has thrown for 2,955 yards and 16 touchdowns on the season.  Lanny Funsten leads the receiving corps with 932 yards on 87 catches and six scores while Chris Gorman leads the ground game with 535 yards on 112 carries.  Defensively, Patrick Moynahan has a team-high 64 total tackles.

Other Honors as Well for Hoffman and Wood: Eric Hoffman was also named The Sports Network/Fathead.com FCS co-National Freshman of the Week for his performance against the Camels as well as being selected as a College Football Performance Awards Honorable Mention Performer of the Week at quarterback.  Punter Greg Wood also earned Honorable Mention Performer of the Week at his position after punting three times for a 46.7-yard average, including a long of 58.  He downed one of his punts at the Campbell one-yard line.

Blair Named Academic All-District V: Senior offensive lineman Nate Blair has been named to the Capital One Academic All-District V Football Team as selected by CoSIDA.  Blair has started all nine games this season at left tackle for the Crusaders, while starting all 31 contests over the past three seasons.  He is an actuarial science major with a 3.84 grade point average.

The Streaks are Over!: Saturday’s victory over Campbell finally brought to an end the Crusaders’ longest losing streak in school history.  Valpo had dropped 29 straight games dating back to a Sept. 12, 2009 win at Concordia (Wis.), the longest streak in NCAA I-FCS.  The loss also snapped a 23-game Pioneer Football League losing skid, with the last conference win coming at Campbell on Nov. 15, 2008.  Finally, Valpo ended a 17-game losing streak at Brown Field.  The Crusaders’ last home win prior to last Saturday came against Davidson on Oct. 11, 2008, a 35-29 triumph in overtime.

Ali-El Has Big Day: Gabe Ali-El had his first two-touchdown game of his career last Saturday against the Camels.  The freshman running back rushed for one score and caught another, the game-winner.  Ali-El had a career-high 12 carries for a season-best 69 yards on the ground while also catching a career-best seven passes for 90 yards.

Gerton Makes Key Grabs: Tight end Mike Gerton also registered career highs with seven catches for 71 yards in the win against Campbell.  The junior did not have any touchdown receptions on Saturday, but may have made one of the biggest catches of the day.  With Valpo trailing 24-19 early in the fourth quarter, the Crusaders faced a fourth-and-16 at the Campbell 30-yard line.  Gerton hauled in a 20-yard reception to keep the drive alive and Valpo eventually scored a go-ahead touchdown to cap the drive.

Smarwt Among All-Purpose Leaders: Kelvin Smarwt ranks 50th among all FCS players averaging 121.4 all-purpose yards per game this season.  Smarwt has picked up 20 yards rushing, 110 receiving, 18 via punt return, and 945 from kickoff returns this season, and has nearly reached 1,100 yards for the season.  He enters this weekend’s finale with 1,093 all-purpose yards for the year.

A Strong Leg: Greg Wood, a First Team All-Pioneer Football League punter one year ago, is averaging 42.81 yards per kick over his 67 punts this season and ranks eighth among all NCAA I-FCS punters.  The junior had a long of 76 yards against San Diego, and has already has 15 50+ yard kicks on the season.  He has landed 16 kicks inside of the 20-yard line for the year.  For his career Wood averages 43.2 yards per punt.  Wood has had at least one 50-yard punt in 17 of his 20 collegiate games.

Racking Up the Offense: Valpo tallied 463 yards of total offense against Butler on Oct. 15, matching the Crusaders’ season high in yardage.  The Crusaders also put up 463 yards in the season opener against Franklin, marking the Crusaders’ highest offensive output since the Brown and Gold rolled up 469 yards at Drake on Sept. 29, 2007.

Lighting Up the Scoreboard: Valpo’s 35 point outburst against Franklin in the season opener marked the highest point total for the Crusaders since the Brown and Gold scored 47 in a 47-14 victory at Campbell on Nov. 15, 2008.

This and That: Redshirt-junior Tim Bennett caught his first collegiate touchdown pass on Saturday against Campbell ... freshman Tanner Kuramata also had his first career touchdown grab against the Camels ... Sean McCarty had his first touchdown reception in over a year since hauling in a pass for a score on Nov. 6, 2010 at Campbell ... 18 different players have caught at least one pass this season, with 16 of the 18 having multiple grabs ... Valpo is looking for back-to-back wins for the first time since Sept. 15 and 22, 2007, when the Crusaders defeated Kalamazoo and Marian (Ind.), both on the road.