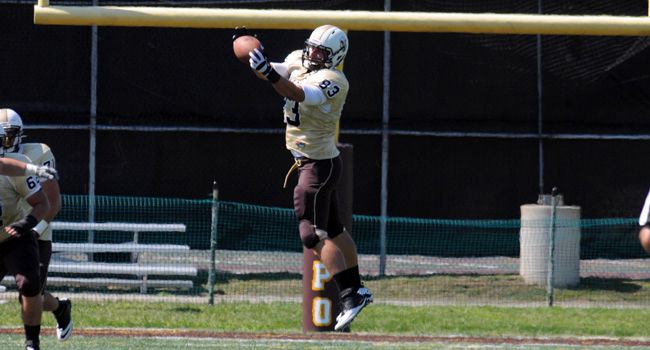 The Valparaiso football team jumped out to a 17-7 lead less than 12 minutes into Saturday afternoon's game against Duquesne at Brown Field, but the Dukes scored the game's final 38 points as the Crusaders fell by a 45-17 score.

Duquesne responded immediately with a seven-play, 75-yard drive, as Larry McCoy rushed for 64 yards, including a 28-yard touchdown run to put the Dukes in front 7-3. But Valpo answered with a long drive, covering 77 yards in 13 plays. Hoffman completed seven passes to five different receivers on the drive, including a 10-yard conversion to redshirt sophomore Fred Gladney (Milwaukee, Wis./Dominican) on a third-and-seven.

With the ball 1st-and-goal on the five, sophomore Gabe Ali-El (Baltimore, Md./Polytechnic Institute) carried twice to get to the one-yard line. Hoffman then finished the drive by sneaking in from one yard out, putting Valpo ahead 10-7 with 4:28 to play in the opening quarter.

The Crusader defense then came up with a big play, stripping McCoy on Duquesne's first play on the ensuing drive, a fumble which was recovered by redshirt freshman Aaron Brandt (Lakefield, Minn./Jackson County Central) on the Duquesne 40-yard line. Taking advantage of the great field position, Hoffman completed a 32-yard pass to senior Eric Slenk (Holland, Mich./Christian) on the first play from scrimmage, and then hit Gerton from eight yards out for Valpo's second touchdown in a 56-second span as the Crusaders went ahead 17-7.

But Valpo would be unable to get the ball inside the 40-yard line the rest of the half, and Duquesne took advantage of a pair of short fields to take the halftime lead. The Dukes' Serge Kona intercepted a Hoffman pass with 10:50 to go in the second quarter, returning it to the Crusaders' 44, and Duquesne needed just three plays to score, as Sean Patterson hit Gianni Carter for a three-yard touchdown pass. Then, with just over four minutes to play in the opening half, the Crusaders came up short on a fourth-and-three attempt from the Dukes' 43-yard line, and Duquesne got a 19-yard touchdown run from McCoy on the following possession to take the 21-17 lead into the break.

The second half saw the Crusaders struggle offensively, as Valpo was held to just 54 yards of offense and four first downs over the final two quarters. Duquesne's Charlie Leventry hit a 39-yard field goal on the Dukes' first possession of the half, while McCoy scored his third touchdown of the game from six yards midway through the third quarter. Patterson hit Oduho for an 11-yard touchdown reception in the fourth quarter, while Marcus Hughes closed the scoring with 2:25 to play on a 37-yard touchdown run.

Hoffman finished the game 22-for-38 for 224 yards and a touchdown, spreading out to nine different targets, but also threw his first three interceptions of the season. Gerton paced the receiving corps with five catches for 45 yards and the aforementioned touchdown, while redshirt freshman Jake Hutson (Blanchard, Mich./Montabella) ran for a team-bset 52 yards on 11 carries. Defensively, fifth-year senior Cody Gokan (Mundelein, Ill./Mundelein) picked up a season-high 13 tackles to lead the Crusaders, while junior Alex Grask (Naperville, Ill./Central) tallied eight tackles and an interception and sophomore Colin Burke (Orlando, Fla./Freedom) counted a sack among his eight tackles.

McCoy led all players with 29 carries for 171 yards on the groun, part of a 261-yard Duquesne rushing attack. Patterson closed the day 20-for-25 through the air for 260 yards and two touchdowns, hitting Oduho seven times for 90 yards and Carter five times for 113 yards. The Dukes out-gained the Crusaders, 546-291, and also possessed the ball for nearly 10 more minutes.

Valparaiso (0-3) opens up Pioneer Football League play next Saturday, September 22, as the Crusaders fly to the West Coast to take on San Diego. Kickoff is set for 3 p.m. CDT, and the game can be heard live via the Valpo Sports Radio Network on WAKE, 1500 AM. Links for the live audio, as well as live stats, will also be available at www.valpoathletics.com.