October 06, 2012 at 1:00 pm
Brown Field , Valparaiso, Ind.
Attendance: 3676
Crusaders Face Off Against Butler in Battle For the Hoosier Helmet 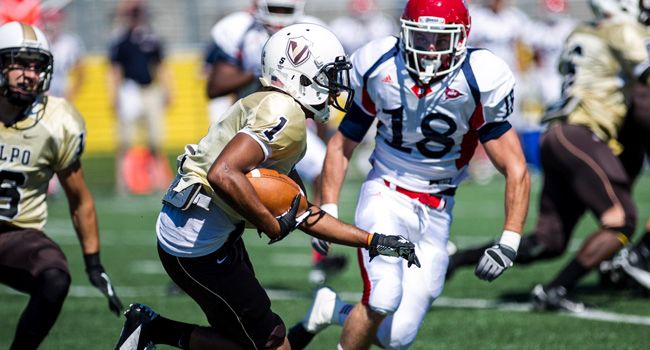 This Week in Crusader Football: Following a bye week, Valparaiso plays its first PFL home game Saturday afternoon when it hosts the Butler Bulldogs in The Battle for the Hoosier Helmet as part of Homecoming Weekend. The two schools first met in 1927 and the Crusaders have played the Bulldogs more than any other school in program history.

Previously: The Crusaders trailed 37-0 at halftime against San Diego before falling 51-14. San Diego racked up 518 total yards, including 227 on the ground. Eric Hoffman threw second-half touchdown passes to Michael Gerton and Andrew Cassara. Valpo committed turnovers in three of its six first-half possessions.

Next Up: The Crusaders host a second straight home game when the Drake Bulldogs come to Brown Field next Saturday. Drake has won eight consecutive meetings between the two schools.

On the Air: For the eighth straight season, the Valpo Sports Radio Network will be home to all 11 Crusader football games in 2012. All 11 games can be heard live on WAKE (1500 AM, Valparaiso), online through www.valpoathletics.com or by downloading the WAKE Radio app for Android or iPhone devices. Todd Ickow will handle all the play-by-play, with Travis Lucian adding the color commentary this week.

Head Coach Dale Carlson: Dale Carlson is 1-25 in his third season with the Crusaders and 111-128-3 overall entering his 24th season as a collegiate head coach. He arrived at Valpo from Ohio Dominican where he began the Ohio Dominican program from scratch in 2004, just as he did at Tri-State University prior to his tenure with the Panthers. He is the 16th head coach in Valpo history, and just the seventh since 1946.

Series Notes: Valparaiso and Butler first met in 1927 and will square off for the 71st time on Saturday afternoon. All-time, the Bulldogs hold a 46-24 advantage between the two schools and have won the last four meetings. Last season in Indianapolis, Butler claimed a 42-14 victory over Valpo. Valpo’s last win in the series came on Oct. 13, 2007, a 42-37 victory at Brown Field.

Scouting Butler: Butler enters play with a 2-0 conference record, posting double-digit wins against Dayton and Campbell. The Bulldogs were picked to finished seventh in the annual PFL preseason coach’s poll. The Bulldogs lost 15 starters from last year’s squad which finished 3-5 in PFL play. Butler, which boasts the PFL’s top offense (420.8 yards/game), is led by junior running back Trae Heeter who leads the league with 559 rushing yards and 662 all-purpose yards. Heeter was named PFL Offensive Player of the Week on Oct. 1.

Homecoming: The Crusaders are looking to win their first Homecoming contest since beating Davidson in overtime 35-29 on Oct. 11, 2008. Valpo has lost four of its last five Homecoming games.

Gladney’s Career Afternoon: Sophomore wide receiver Fred Gladney set new career highs with nine catches for 125 yards against San Diego. Gladney also pulled in a 39-yard reception against USD, the longest play of his collegiate career. Gladney has 19 catches in his last three games and leads the Crusaders in receptions (20) and receiving yards (193).

Coach to Cure M-D: This weekend, the Valparaiso Football program will be participating in Coach to Cure M-D, a national charity project to raise awareness for Duchenne Muscular Dystrophy. For more information visit CoachtoCureMD.org.