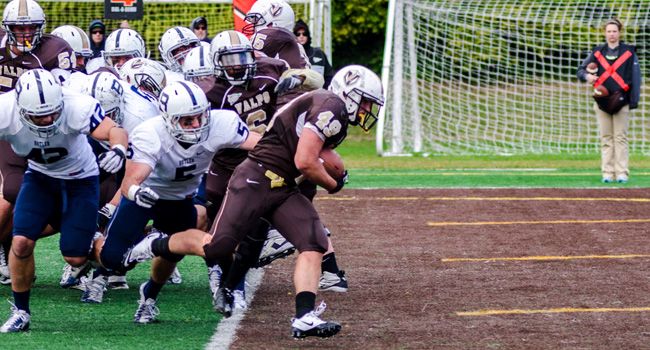 Previously: The Crusaders trailed the entire way last Saturday afternoon in a 56-17 loss to the Butler Bulldogs on Homecoming Weekend at Brown Field in the Battle for the Hoosier Helmet. Valpo fell behind 51 seconds into the game and faced an uphill battle from there. Jake Hutson ran for two touchdowns in the second half for the Crusaders after entering the game with just one career score.

Next Up: Valpo hits the road for the first time in four weekends next Saturday, making the trip east to Ohio to take on Dayton in PFL play. Kickoff on the 20th is slated for noon CDT.

On the Air: For the eighth straight season, the Valpo Sports Radio Network will be home to all 11 Crusader football games in 2012. All 11 games can be heard live on WAKE (1500 AM, Valparaiso), online through www.valpoathletics.com or by downloading the WAKE Radio app for Android or iPhone devices. Todd Ickow will handle all the play-by-play.

Head Coach Dale Carlson: Dale Carlson is 1-26 in his third season with the Crusaders and 111-129-3 overall entering his 24th season as a collegiate head coach. He arrived at Valpo from Ohio Dominican where he began the Ohio Dominican program from scratch in 2004, just as he did at Tri-State University prior to his tenure with the Panthers. He is the 16th head coach in Valpo history, and just the seventh since 1946.

Series Notes: Valparaiso and Drake are meeting for the 20th time in a series that dates back to 1993. The Bulldogs hold a 16-3 advantage all-time. Drake has won eight straight meetings between the two schools, including a 50-0 decision at Drake Stadium last season. In the Bulldogs’ last visit to Brown Field, the Crusaders lost a tight 21-19 game. The last Crusader win came during the 2003 PFL championship season, a 51-45 overtime victory.

Scouting Drake: Drake enters the game 5-2 overall and a perfect 3-0 in PFL action, most recently downing San Diego in Des Moines by a 38-10 score. The Bulldogs put a scare into #2 Montana State earlier this season before falling 34-24. Drake is led by fifth-year senior quarterback Mike Piatkowski, who is completing over 62% of his passes and averaging nearly 300 yards per game, while throwing 11 touchdowns against just four interceptions. Nick Rosa has a team-best six touchdown catches and is averaging almost 16 yards per catch. Defensively, the Bulldogs pace the PFL in both interceptions (10) and sacks (16).

Grask Tackles: Junior strong safety Alex Grask led all tacklers with 14 tackles (eight solo) last week against Butler. The 14 takedowns is the most of Grask’s career. His 50 total tackles is already his highest single season mark, eclipsing his 43-tackle season from 2011.

Mr. Touchdown: Redshirt freshman running back Jake Hutson scored two rushing touchdowns last week against Butler, bringing his team-leading total to three on the season. The Crusaders have not had a player tally three or more rushing TDs since Ross Wiemer had three rushing touchdowns in 2009.

Spreading the Ball Around: Valpo continued to spread the ball around in its passing game last week against Butler, as quarterbacks Eric Hoffman and Ben Lehman combined to complete 36 passes to 10 different receivers. Eight players caught at least three passes, led by a career-high tying nine receptions from Fred Gladney.

Converting on Fourth Down: The Crusaders were aggressive in going for it on fourth down last Saturday against Butler, ending the game with five fourth-down conversions on eight attempts. The five successful fourth downs was the most by a Valpo squad since the 2011 team converted seven fourth downs against Butler.

Gladney’s Career Afternoon: Sophomore wide receiver Fred Gladney set new career highs with nine catches for 125 yards against San Diego. Gladney also pulled in a 39-yard reception against USD, the longest play of his collegiate career. Following another nine-catch performance against Butler, Gladney has 28 catches in his last four games and leads the Crusaders in receptions (29) and receiving yards (249).