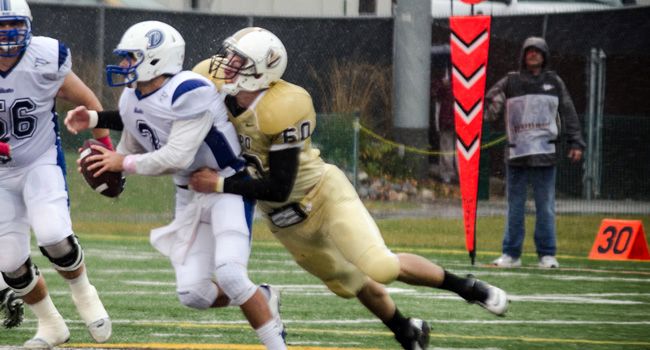 This Week in Crusader Football: Following back-to-back home games, Valparaiso hits the road for the first time in nearly a month, making the trip east to take on Dayton in Pioneer Football League action.

Previously: Senior Eric Slenk caught a pair of touchdown passes on a rainy Saturday afternoon at Brown Field, but it was not enough for the victory, as Valparaiso dropped a 35-21 decision to Drake in Pioneer Football League action. Jake Hutson ran for 98 yards as the Crusaders out-gained the Bulldogs on the ground, 162-108, but Drake threw for 327 yards.

Next Up: Valpo returns home next weekend as the Crusaders host Parent’s Day at Brown Field on Saturday, Oct. 27 at 1 p.m. against Marist.

On the Air: For the eighth straight season, the Valpo Sports Radio Network will be home to all 11 Crusader football games in 2012. All 11 games can be heard live on WAKE (1500 AM, Valparaiso), online through www.valpoathletics.com or by downloading the WAKE Radio app for Android or iPhone devices. Todd Ickow will handle all the play-by-play.

Head Coach Dale Carlson: Dale Carlson is 1-27 in his third season with the Crusaders and 111-130-3 overall entering his 24th season as a collegiate head coach. He arrived at Valpo from Ohio Dominican where he began the Ohio Dominican program from scratch in 2004, just as he did at Tri-State University prior to his tenure with the Panthers. He is the 16th head coach in Valpo history, and just the seventh since 1946.

Series Notes: Valparaiso and Dayton are playing for the 22nd time in a series which dates back to 1988. The Flyers hold a 19-2 advantage in the all-time series and have won eight straight meetings, including a 49-10 decision at Brown Field last season. The Crusaders’ last win in the series came during the 2003 PFL championship campaign, when they downed Dayton on the road by a 33-28 score.

Scouting Dayton: Dayton enters Saturday’s game at 3-4 overall and an even 2-2 in Pioneer Football League action, having won two straight PFL games, including a 41-27 win over Morehead State last Saturday. The Flyers gained 532 yards of offense in last week’s win, their highest output since Oct. 4, 2008. Dayton boasts a balanced offense which has gained 1,245 yards through the air and 1,225 on the ground this season. Will Bardo has seen most of the time at quarterback and has thrown for 1,127 yards and six touchdowns while also running for 290 yards and three scores. Dan Jacob leads the ground game with 317 yards and a touchdown.

Backups Stepping Up: With injuries to their starting quarterback and halfback entering the Drake game, the Crusaders’ backups stepped up offensively against the Bulldogs. Jake Hutson got the start at running back and took advantage of a career-high 25 carries to run for a career-best 98 yards. Meanwhile, Ben Lehman and Quinn Schafer combined to go 17-for-34 for 178 yards at quarterback, with Schafer setting a new career high with 78 passing yards.

Slenk the Target: Senior wide receiver Eric Slenk entered last Saturday’s game with just nine catches on the year for 118 yards, but found himself a favorite target of Lehman and Schafer. Slenk matched his career best with five catches, going for a career-high 81 receiving yards. After entering the game with just one career touchdown catch, Slenk caught a pair of touchdown receptions as well.

Ground and Pound: Hutson’s effort in the rushing game led Valpo’s top rushing attack in over three years. Four Crusaders combined to carry the ball 41 times for 162 yards, the highest output on the ground by Valpo since running for 188 yards against Carthage on Sept. 26, 2009. Ryan Lehr had eight carries for 32 yards and a touchdown, while Jabril Baker carried five times for 27 yards.

Defensive Highs: Fifth-year senior linebacker Cody Gokan matched his season best in the tackles category with a team-best 13 tackles against Drake last Saturday, matching the second-highest single-game total of his career. Meanwhile, freshman John Guilford tallied a pair of solo sacks, the first of his career. Guilford is the second Crusader to pick up multiple sacks in a game this season, joining Francis Baker Jr., who registered two sacks at San Diego.

Grask Tackles: Junior strong safety Alex Grask led all tacklers with 14 tackles (eight solo) against Butler two Saturdays ago. The 14 takedowns marked the most of Grask’s career. After posting six tackles against Drake last Saturday, Grask now has a team-best 56 total tackles on the season.

Mr. Touchdown: Redshirt freshman running back Jake Hutson scored two rushing touchdowns two Saturdays ago against Butler, bringing his team-leading total to three on the season. The Crusaders have not had a player tally three or more rushing TDs since Ross Wiemer had three rushing touchdowns in 2009.