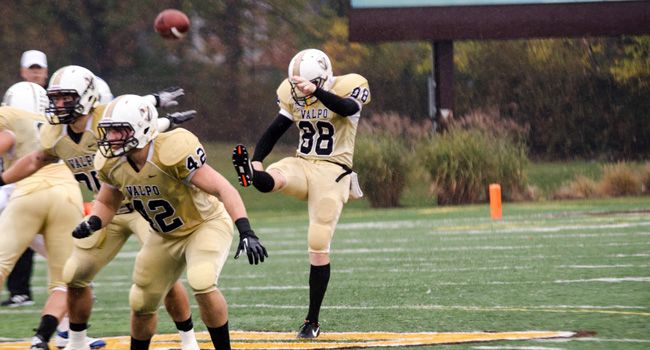 Playing on the road for the first time in nearly a month, Valparaiso gave up 631 yards of offense to Dayton Saturday afternoon in a 45-0 loss to the Flyers at Welcome Stadium in Dayton, Ohio.

Dayton ran for 473 yards on the afternoon, led by 155 yards on 10 carries from Dan Jacob and 124 yards on nine rushes from Connor Kacsor. Meanwhile, the Crusaders mustered just 164 yards of offense, led by 60 rushing yards from redshirt freshman Jake Hutson (Blanchard, Mich./Montabella).

Following a Crusader punt on the opening possession, Dayton moved down the field, using 12 plays to cover 80 yards, capped by a three-yard touchdown run by Rob Washington to take a 7-0 lead just over eight minutes into the game. The Crusaders then threw an interception on their next possession, turning the ball over to the Flyers in the red zone. But Valpo kept Dayton from finding the end zone, as the Flyers' Pat Sankovic kicked a 25-yard field goal to make it 10-0.

Unable to get any momentum going offensively, the Crusaders punted on each of their next three times with the ball, all three of which Dayton turned into points. Kacsor ran in from 11 yards out two plays into the second quarter, Jacob pushed in on a rush from two yards out, and Washington picked up his second TD of the game from 46 yards to make it 31-0 with 7:40 to go in the half. The Valpo defense held Dayton to a three-and-out on its next possession, and with the Flyers in the red zone with time winding down on the second quarter, sophomore Devan Gadson (Orlando, Fla./Freedom) intercepted a pass in the end zone to keep Dayton from adding to its lead before the half.

Valpo forced a turnover on downs and a punt on Dayton's first two offensive possessions of the second half, and following the latter, the Crusader offense put together its best drive of the game to date. Behind first-down passes from sophomore Ben Lehman (Elgin, Ill./Saint Edward) to redshirt sophomore Fred Gladney (Milwaukee, Wis./Dominican) and sophomore Cole Anderson (Highlands Ranch, Colo./Valor Christian) and a first-down rush from senior Ryan Lehr (Cincinnati, Ohio/Glen Este), Valpo moved into Flyer territory for the first time. But the drive stalled on the 43, and following a punt to the 17, Jacob broke off an 83-yard touchdown run on the very next play.

After a Crusader three-and-out, Dayton (4-4, 3-2 PFL) scored on the first play of the fourth quarter to cap the scoring, as Kacsor ran it 77 yards for his second score of the day. Valpo moved the ball into Flyer territory two more times over the final 15 minutes, but could not push inside the Dayton 38-yard line.

Anderson led the Crusaders on Saturday with four catches for 27 yards, as nine different receivers caught passes for Valpo. Lehman was 13-for-26 through the air, but for just 62 yards. Senior Greg Wood (Libertyville, Ill./Libertyville) punted a career-high 11 times, averaging 38 yards per kick and dropped three inside the 20-yard line. Defensively, junior Alex Grask (Naperville, Ill./Central) paced the Crusaders with a career-best 14 tackles, including 10 solo stops, while sophomore Ryan Mundy (West Lafayette, Ind./Harrison) had two tackles for loss, including a sack.

Valparaiso (0-7, 0-4) looks to earn a win on Parent's Day at Brown Field next Saturday, October 27 as the Crusaders host Marist. Kickoff is set for 1 p.m. All the action can be heard live on the Valpo Sports Radio Network (WAKE, 1500 AM, Valparaiso) and online at www.valpoathletics.com, which will also have a link for live stats.