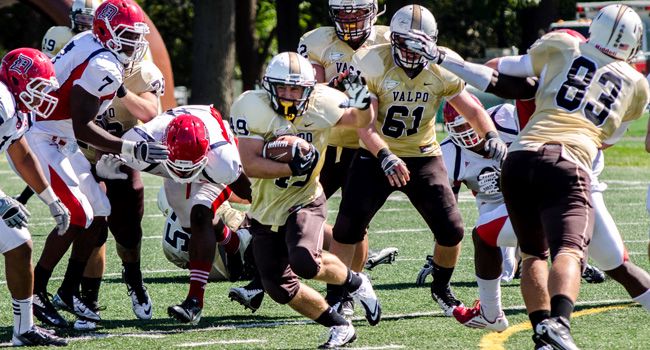 The Valparaiso football team surrendered four touchdowns of 78 or more yards in the first half Saturday in a 44-7 loss to Marist College as part of Parent’s Day at Brown Field.

In the opening half, Marist notched passing touchdowns of 97 and 78 yards along with rushing touchdowns of 85 and 96 yards. The four plays accounted for 356 of the Red Foxes’ 661 total yards.

“You can’t give up big plays,” head coach Dale Carlson said. “We gave up seven or eight of them…you can’t expect to win when those things happen.”

The Crusaders’ offense racked up 309 passing yards and 382 yards of total offense in a losing effort.

The Crusaders took the opening kickoff and marched into Marist territory with a seven-play, 43-yard drive. On the possession, Eric Hoffman (Manitowoc, Wis./Lincoln) completed a 41-yard pass to wide receiver Eric Slenk (Holland, Mich./Christian). On third-and-19 from the Marist 26, Hoffman was intercepted by safety Zach Adler.

The Red Foxes took over at their own seven-yard line and after two negative plays, Chuckie Looney hit Mike Rios for a 97-yard touchdown strike. After a missed extra point the Crusaders trailed 6-0 with 10:20 left in the first quarter.

After a Valpo three-and-out, Marist got the football back and penetrated deep into Valpo territory with a 13-play, 59-yard drive that featured a pair of third down conversions. On third down from the Crusaders 12-yard-line, Marist offensive lineman Peter Evans was called for holding, forcing the Red Foxes to settle for a Jason Myers 34-yard field goal.

On their third possession, the Crusaders strung together their longest drive of the first half.  Following a 29-yard pass to Slenk. Hoffman led a 10-play, 74-yard drive that included completions to Jake Hutson (Blanchard, Mich./Montabella), Fred Gladney (Milwaukee, Wis./Dominican) and Tim Bennett (Joliet, Ill./Joliet Catholic). On third and less than a yard from the Marist one-yard line, Hoffman’s pass for Andrew Cassara (Mokena, Ill./Aurora Christian) was incomplete. A fourth down run to Ryan Lehr (Cincinnati, Ohio/Glen Este) was stuffed for a loss of one, resulting in a turnover on downs.

“The disappointing thing is that we have been pretty good in the redzone, for the most part, for the year,” said Carlson.  “We just, again, lacked some consistency in that area today.”

The Crusaders’ lone scoring drive of the game came on their opening possession of the second half.  After a 12-yard run from Hutson, Hoffman reeled off four straight completions, including a 21-yard touchdown pass to Tanner Kuramata (Rancho Cucamonga, Calif./Claremont) which put Valpo on the board.

The Red Foxes amassed 349 net rushing yards and were led by a pair of 100-yard performers in Jacques (128) and Onakoya (110).  Looney finished 8-of-13 for 232 yards before giving way to backup Tommy Reilly to start the second half.  Rios led all receivers with four catches for 193 yards.

Marist finished 9-of-15 on third down conversions in the game.

“The thing is that we were moving the ball,” said Carlson.  “The players gave a great effort, which I was very happy with.  The effort was there.  You pick out eight plays, nine plays and that’s the difference in the game. But as I tell the players, you never know when those plays are going to happen - you have to be ready to make those plays.”

Valparaiso (0-8, 0-5) hits the road to take on Campbell University next Saturday in Buies Creek, N.C.  Kickoff is set for noon CDT.  All the action can be heard live on the Valpo Sports Radio Network (WAKE, 1500 AM, Valparaiso) and online at www.valpoathletics.com, which will also have a link for live stats.