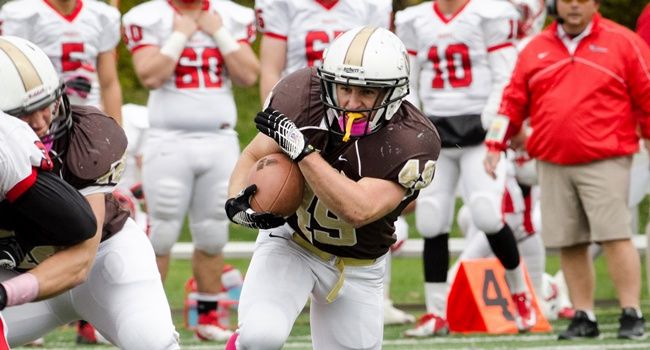 “Even when it was 21-7, I think our guys knew we had given up some mistakes - we had really given them a couple of scores just on some poor execution,” said Crusader head coach Dale Carlson.  “We knew that if we played and executed our assignments that we’d be great.  You could see in our players’ eyes on the sidelines that they really believed they could get it done.”

The Crusaders, who beat Campbell for the second straight season, amassed 504 yards of total offense, 304 of which came in the running game.  Redshirt sophomore Eric Hoffman (Manitowoc, Wis./Lincoln) shined in the passing game, finishing 21-of-23 for 200 yards and three touchdowns.

“Everybody thinks that we want to throw the football, and that we’re going to throw it 50 times a game,” said Carlson.  “We’re out here trying to take what the defense is going to give us, and we’re going to ride the plays that are being successful.  Today it was the run game, and that set up a couple of things throwing-wise.”

Trailing 21-20 midway through the third quarter, the Crusaders took over at their own four-yard-line and put together an eight-play, 96-yard drive that culminated with a 62-yard touchdown run by Hutson.  It was the Crusaders’ first lead of the game and the team’s first since the opening quarter of a loss to Duquesne on Sept. 15.

After Campbell’s Dakota Wolf scored a 17-yard touchdown to give Campbell a 21-7 lead with 8:41 remaining in the second quarter, the Fighting Camels did not score for the remainder of the game as the Crusaders rattled off 34 straight points.

The Fighting Camels received the opening kickoff and took the first lead of the game.  On fourth and one from the Valpo six-yard-line, Kurt Odom ran in for a score, capping a 13-play, 78-yard drive.

The Crusaders briskly moved the ball into Camels territory on their opening offensive possession. After four first downs, Valpo had the ball first and ten at the Camels 19-yard-line, but Hoffman fumbled the ball after being sacked by Andrew Yost.  Jeff Swinton recovered the ball and returned it 67 yards for a touchdown, putting Campbell up 14-0 with 4:07 left in the first.

Valpo began piecing together its first scoring drive at the tail end of the first quarter, a possession that stretched into the second quarter.  On the second play of the drive, Hutson unleashed a 26-yard run.  On second and 18 from the Campbell 24, Hoffman swung it out to redshirt junior Sterling Summerville (Indianapolis, Ind./Park Tudor [Missouri]), who made a one-handed catch and raced into the endzone for a score.  The touchdown brought the Crusaders to within 14-7 with 12:45 remaining in the first half.

After Wolf’s touchdown run put the Camels back up by 14, the Crusaders began to mount their comeback.  The offense assembled an 11-play, 72-yard drive which included a 19-yard scramble from Hoffman on third and one, along with a 19-yard connection to sophomore Tanner Kuramata (Rancho Cucamonga, Calif./Claremont).  On third and goal from the Campbell nine-yard-line, Hoffman found Summerville for their second touchdown connection of the game.  Kicker Mike Pando (Hamilton, Mich./Hamilton) missed the extra point and the Crusaders trailed 21-13 heading into halftime.

The offense remained efficient in the second half, twice posting 96-yard scoring drives.  Hutson pulled the Crusaders to within a point, adding the first of three second-half touchdowns, a 17-yard scamper with 8:43 remaining in the third quarter.  Hutson also added touchdown runs of 62 and four yards during a lopsided second half during which the Crusaders outscored Campbell 28-0.

“I think towards that second quarter, I think our offensive line got a lot of confidence running the football,” Carlson said. “That’s what we’ve been talking about all year is we have to get all sides together.  We played well on defense, we played well on offense, we had a special teams turnover, we had a couple of nice returns.  I’d say this was one of the more complete games that we’ve played since I’ve been here.”

Hutson’s 248 rushing yards is second best performance in Valpo football history, trailing only Jeff Horton, who scampered for 253 yards against Wisconsin Lutheran on Sept. 3, 2005.  His three touchdowns is one shy of matching a school record for a single game.  The rookie averaged 8.9 yards per carry on the afternoon.

“We talked about this being the month of November - granted we’re not in the hunt for a championship - but championship teams have to play well at the end of the year,” said Carlson.  “To prepare ourselves for the future, we have to learn how to win in November.”

Valparaiso (1-8, 1-5) returns home to take on Davidson College next Saturday at Brown Field. Kickoff is set for 1 p.m. CST.  All the action can be heard live on the Valpo Sports Radio Network (WAKE, 1500 AM, Valparaiso) and seen online via a link at www.valpoathletics.com, which will also have a link for live stats.