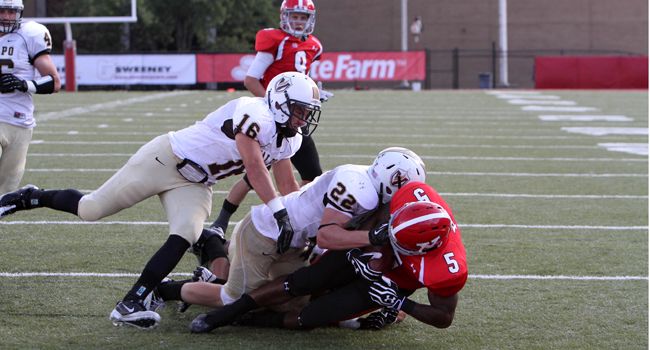 Facing a highly potent North Dakota offense, the Crusaders were unable to overcome a wide first-half deficit as they fell 69-10 in the season opener at the Alerus Center in Grand Forks.

Quarterback Ben Lehman (Elgin, Ill./Saint Edward Central Catholic) saw a few series under center including one that resulted in a Valpo score thanks to a sensational diving catch by receiver Fred Gladney (Milwaukee, Wis./Dominican).

But All-American wide receiver Greg Hardin proved to be too much as the senior recorded 163 receiving yards on five catches, a touchdown reception, and a TD on a kickoff return. Running backs Jake Miller and Adam Shaugabay added three rushing touchdowns each.

Victors of the coin toss, Valpo (0-1) received the opening kickoff before manufacturing a pair of first downs. Redshirt sophomore Jake Hutson (Blanchard, Mich./Montabella) accounted for 19 (11 rushing, 8 receiving) of the 26 yards on the first series of 2013. A string of incomplete passes forced a Mike Pando (Hamilton, Mich./Hamilton) punt, which the redshirt junior landed out-of-bounds at the North Dakota 25-yard line.

Redshirt freshman Ryan Bartels wasted no time silencing any doubts in front of a crowd of 9,269 rowdy fans. On his first collegiate play from scrimmage, the UND quarterback flung a pass into the hands of Hardin who took it to the house for a 75-yard score. Zeb Miller’s first PAT of the night made it a 7-0 game.

The North Dakota (1-0) defense contained Hutson on the ensuing Crusader drive as the running back was unable to break loose for significant yardage on either carry. A quick three-and-out brought Pando and the special teams unit back onto the field.

The Valpo offense did not get much time to recoup as UND return man Kenny Golladay fielded the punt at his own 36-yard line before dodging and dancing his way into the Crusader end zone to increase the North Dakota lead to 14-0.

Hutson was given the ball five consecutive times on Valpo’s third drive of the game. A 17-yard run on a 2nd and 6 moved the chains. Subsequently faced with a 2nd and 1, the North Dakota defense penetrated the line on two straight rush attempts to force another VU punt.

North Dakota added another touchdown in the final minute of the first quarter as it assembled a 10-play, 83-yard drive capped off with a Jake Miller dash into the end zone.

On the following UND drive, it was Miller again that eluded the Valpo secondary to extend the lead to 28 points. The 8-yard rush was set up after a 16-yard reception by Golladay and a 57-yard snag by Harden.

North Dakota running back Adam Shaugabay scampered into the end zone in the waning seconds of the first half to give the home team a 35-0 cushion at the break.

Just as he did in the first play of the first half, Greg Hardin raced into the end zone as soon as he touched the ball. Instead of allowing his offense to take the field, Hardin tallied another score with a 90-yard kickoff return.

To the Crusaders' credit, the tenacity stayed at a high level. Down 42-0, the Brown and Gold orchestrated a six-play, 27-yard drive before Pando punted away from his own 47-yard line. The special teams unit hustled down and converged on UND punt returner Jer Garman. Facing a handful of defenders, Garman was unable to haul in the punt. Instead, the ball caromed off his pads and was then smothered by the Crusaders.

Valpo took over on the UND 21-yard line with a fresh set of downs but were unable to move the chains. Kicker Josh Young (Lemont, Ill./Lemont) split the uprights from 36 yards out to give Valpo its first points of the season.

North Dakota reinstated its commanding lead on the following drive via Jake Miller's third score of the game.

The Brown and Gold meticulously chipped away at the UND defense, utilizing medium gains from Hutson coupled with Lehman's mobility. Faced with a 4th and 2, the Crusaders were benificiaries of a defensive offsides that granted them a first down.

Valpo took full advantage of its new life on the drive. On a 2nd and 7 from the 41, Lehman fired a ball towards the goal line that Gladney dove full extension for. The junior held on as his momentum carried him into the end zone. Freshman Jacob Newman (Lawrenceburg, Ind./Lawrenceburg) made it a 49-10 game with a successful PAT.

North Dakota went on to score 20 unanswered points in the 4th quarter en route to the 69-10 victory.

Starting quarterback Eric Hoffman (Manitowoc, Wis./Lincoln) completed 6 of 20 passes for 41 yards. Lehman finished the night 3-of-3 for 52 yards and a TD pass.

On the defensive side of the ball, seniors Alex Grask (Naperville, Ill./Central) and Patrick Derbak (Schaumburg, Ill./Schaumburg) both led the team in tackles with six apiece. Sophomore Drew White (Geneva, Ill./Geneva) emerged with four tackles - one for a loss - and a forced fumble.

What perhaps was most reassuring was the fact the Crusaders were penalized just twice all night. Furthermore, their lone turnover came late in the second half on a play gone awry due to a miscommunication.

"Our guys did not fold. They did not give in. We have some things to work on for next week, but I certainly did see some things to build on," head coach Dale Carlson said after the game.

The Crusaders will get a little more than a week to prepare for Saint Joseph's (Ind.). The Pumas spoiled Valpo's home opener last season with a late fourth quarter drive at Brown Field to take the Week 1 tilt 36-34. The two teams will tangle in Renssalaer next Saturday at 12 p.m.