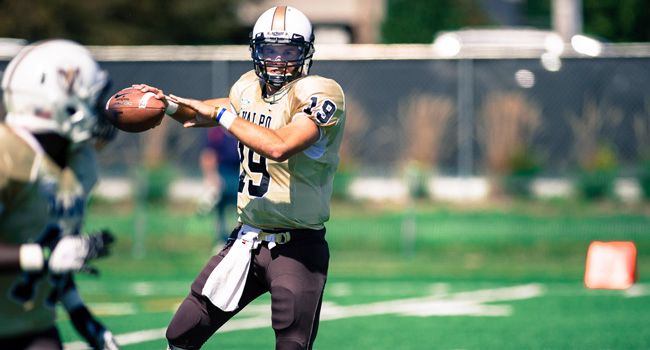 The Valparaiso football team entered the fourth quarter at Saint Joseph’s (Ind.) with a 23-18 advantage on Saturday, but the Pumas were able to put up 16 points in the quarter, including the eventual game-winning field goal with 4:51 to play, and a late Crusader fourth-down attempt came up short as Valpo fell by a 34-31 final.

The Crusaders entered the fourth quarter with a four-point lead thanks to a strong defensive effort that left the Pumas scoreless in the third period.  Down a field goal early in the third quarter, Valpo put together a five-play, 48-yard drive that result in a 37-yard made field goal by Jacob Newman (Lawrenceburg, Ind./Lawrenceburg) to bring the Crusaders back to within two points at 18-16.

The Crusader defense then went to work.  With just under eight minutes left in the quarter, Nick Moffitt (San Diego, Calif./Escondido Charter) and Brandon Doepke (Fitchburg, Wis./Madison West)each came up with huge plays for the Crusader defense.  Having moved the ball to the Valpo 35-yard line, Moffitt stuffed Kobi Cook at the line of scrimmage on a 3rd and 1 play call.  The Pumas would then go for it on 4th and 1, only this time; it was Doepke who met James Wilson at the line of scrimmage for no gain and a loss of downs.

With the ball back on their own 35, the Crusaders put together a nine-play, 65-yard drive that culminated in a 12-yard scamper into the end zone by Brandon Hall (Muskegon, Mich./Orchard View).  On the drive, Eric Hoffman (Manitowoc, Wis./Lincoln) was able to connect a 19 yard pass to Andrew Cassara (San Diego, Calif./Escondido Charter) on 3rd and long to move the chains and keep the drive alive.  Several plays later, Hoffman and Cassara would connect again for a 14 yard gain on 3rd and 8.  Hall then went to work and found the end zone to put the Crusaders up 22-18.  A Newman extra point ended the third quarter 23-18, advantage Valpo.

Starting the fourth quarter, Saint Joseph was able to move the chains on 3rd and 3 and pick up a first down at the Valpo 28.  Five plays later, the Puma quarterback found Julian Walker in the end zone for an 18 yard touchdown.  The Pumas elected to go for two but were denied by the Crusader defense, leaving the Valpo deficit at just one point at 24-23.

Unable to sustain a drive, the Crusaders were forced to punt with 11:28 remaining in the game.  The punt was downed inside the Pumas’ 20-yard line, but two plays later, a 76-yard touchdown pass gave St. Joe’s a 31-23 lead.

Not to be outdone, the Crusader offense would put together a six-play, 75-yard drive to tie the game at 31-31.  Starting on their own 25, Jake Hutson (Blanchard, Mich./Montabella)and Hall picked up 17 yards to move the ball to the 42 yard line.  Hoffman then took over, completing a 58-yard touchdown pass to Tanner Kuramata (Rancho Cucamonga, Calif./Claremont).  Hoffman would find Kuramata again on the 2 point conversion to tie the game at 31-31.

The Pumas would respond with a nine-play, 3:31 drive that resulted in a 29-yard field goal from Gavin Voss, the eventual game-winning score.  Valpo moved the ball into St. Joe’s territory on the ensuing possession, but faced with a 4th and 12 to keep hope alive, Hoffman’s pass to Kent Warren (Mission, Texas/Veterans Memorial) came up three yards short, and the Pumas would run out the clock.

The game started well for Valparaiso, as the Crusaders came out of the gate early, scoring a touchdown on its first drive of the game.  With the ball on their own 25, the Crusaders needed just two plays to get on the scoreboard, as Fred Gladney (Milwaukee, Wis./Dominican) reeled in a 73-yard touchdown pass from Hoffman to take a 6-0 lead.

St. Joe’s scored the next 18 points, but Valpo was able to respond before intermission to make it a one-score game.  After pinning the Pumas deep in their own territory and forcing a three-and-out, the Crusaders took possession on the SJC 38 and scored five plays later on a 10-yard pass from Hoffman to Warren, making it 18-13 at the break.

Hoffman totaled 291 yards on Saturday on 22-of-40 passing while throwing for three touchdowns.  A trio of Crusaders ended up with at least 50 yards receiving: Gladney (98 yards), Kuramata (87 yards), and Warren (50 yards).

Valparaiso (0-2) returns to the gridiron on Saturday, Sept. 14 when the Crusaders welcome William Jewell to Brown Field for the home opener.  Kickoff is set for 1:00 p.m, and the game can be seen and heard live on ValpoAthletics.com, with live stats available through the official Crusader website as well.