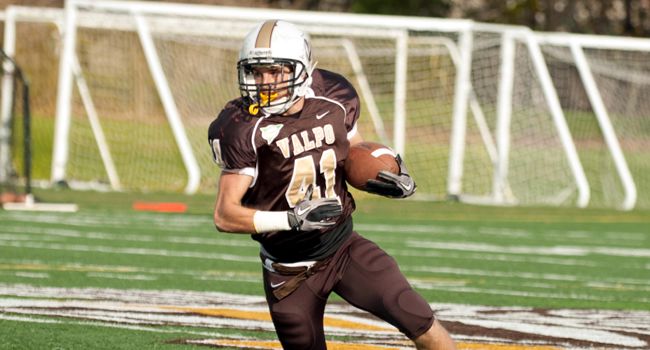 Freshman Brandon Doepke (Fitchburg, Wis./Madison West) had a breakout game Saturday afternoon against Marist, but the Crusaders were unable to put any points on the scoreboard as they fell 37-0 to the Red Foxes in Poughkeepsie, New York. Doepke, along with sophomore Alex Green (Zionsville, Ind./Zionsville Community) and John Guilford (Spencer,Ohio/Black River) each recorded at least ten tackles as the defense kept the Brown and Gold in the game until late in the second half.

"I was disappointed with how we played today. The score is not indicative of the effort our defense gave. Marist did a good job stopping our offensive attack which is something we're going to have to improve for Mercer next week," head coach Dale Carlson said.

On their first possession of the game, the Red Foxes let Atiq Lucas do much of the heavy lifting. The running back broke loose for a 37-yard carry on the first play. A 22-yard completion from Charlie Looney to Bartley Leneghan granted Marist a goal-to-go situation at the Valpo 1. Lucas was called upon again as he dove across the plane to give Marist a quick 7-0 lead.

The Crusader offense was just getting its bearings when quarterback Eric Hoffman (Manitowoc, Wis./Lincoln) completed a short pass to freshman Denzell Conway (New Orleans, La./Mary Institute Country Day [Mo.]) who had the ball jarred loose by cornerback Zach Quarles. Paul Sakowski scooped up the fumble and ran it 18 yards for a touchdown, giving Marist a 14-0 lead after five minutes and 38 seconds of play.

Valpo assembled a lengthy drive on its ensuing possession. Hoffman went 8-for-8 as he dispersed passes to four different receivers but an aggressive Marist defense got to the QB on a 3rd and 6 for a ten-yard sack. The loss on the play moved the Crusaders back to the Marist 37 and they were forced to punt.

The defense forced a quick three-and-out from the Red Foxes and a 29-yard punt to the 42-yard line of Marist essentially gave Valpo the same field position it had just sacrificed.

Valparaiso held the ball for twelve minutes in the first quarter but trailed 14-0.

Hoffman and the rest of the offense took over and converted a key 3rd down pass to Tanner Kuramata (Rancho Cucamonga, Calif./Claremont) to advance into the red zone. Sophomore running back Brandon Hall (Muskegon, Mich./Orchard View), in for an injured Jake Hutson, burst ahead for nine yards and a goal-to-go scenario.

However, on first down, Hoffman threw a pass intended for Kuramata, but Quarles was there to pick it off for a touchback.

Thanks to a 49-yard touchdown reception on the first play of a drive later in the quarter, Marist took a 21-0 lead into the half.

The Red Foxes had possession of the ball for just 6:09 of the first half, a trend that took a complete 180-degree turn in the second half.

Marist added three insurance points on its first possession of the second half via a 41-yard field goal to cap an eight-play drive. Valpo followed with a four play, 1:40 drive that resulted in an Alex Kozlowski (Novi, Mich./Detroit Catholic Central) punt.

Looney tossed his second touchdown pass of the day on the following Red Fox possession. The quarterback threw for 65 of the 75 total yards on the eight-play drive. The ten-yard touchdown connection to David Diomede made it 31-0 and put the game in hand for Marist.

Spelling relief for Lucas, Red Fox running back Jared Lynch recorded a rushing touchdown late in the fourth quarter to extend the lead to 37-0.

Overall, Marist had a 22:21-7:39 time of possession advantage in the second half. After establishing a three-score lead, the Red Foxes were content to pound the ball on the ground and bleed out the clock.

Hoffman finished the afternoon 18 of 29 for 127 yards and two interceptions. A blitz-happy Marist defense sacked him six times and instilled constant pressure on the quarterback. Andrew Cassara (Mokena, Ill./Aurora Christian) corralled eight passes on the afternoon, a season-high for the junior receiver. Hall registered 68 yards on 14 carries, averaging a shade under five yards per rush.

For the third time in five games, Green led the Crusader defense in tackles. He added 14 to his stat sheet Saturday.