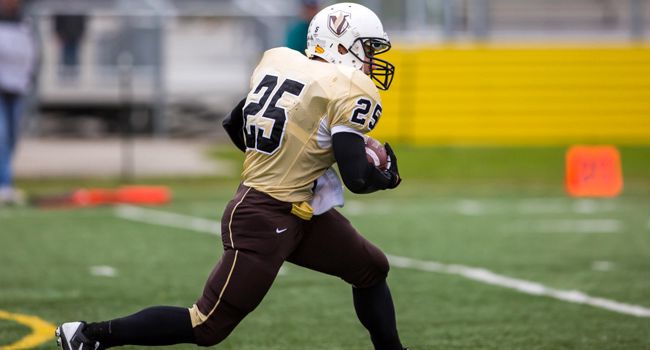 The Crusader defense continued its staunch play in the first quarter, keeping Mason Mills and the explosive San Diego offense in check early on. The Toreros did coordinate a five-play, 69-yard scoring drive with just over four minutes in the opening stanza. Valpo trailed first-place San Diego 7-0 at the conclusion of the first quarter.

But just as it did a week ago against Drake, sixteen points within a short period of time doomed the Brown and Gold.

The Toreros took advantage of stellar field position as they needed to maneuver just 48 yards on seven plays to score their second touchdown of the afternoon. Running back Kenn James ran it in from 17 yards out before the extra point made it 14-0 with 13:13 in the first half.

San Diego's defense forced a three-and-out on the ensuing Crusader possession. On 4th and 3 from his own 26-yard line, Alex Kozlowski's (Novi, Mich./Detroit Catholic Central) punt was blocked back into the Valpo end zone. The result was a safety for the visitors, extending their lead to 16-0 with 12:16 remaining.

A wobbly kick following the safety gave San Diego the ball at the Valpo 44. The Torero offense needed just three plays before further padding their lead. Mills tossed a three-yard TD pass to Brandon White with 11:50 left. In a matter of 83 seconds, the score went from 7-0 to 23-0.

The Crusaders did get on the scoreboard on their following possession. The offense formulated a balanced six-play drive that featured a 24-yard rush from Jabril Baker (Indianapolis, Ind./North Central [Wabash]). The series concluded with a 15-yard touchdown pass from Eric Hoffman (Manitowoc, Wis./Lincoln) to Tanner Kuramata (Rancho Cucamonga, Calif./Claremont). Jacob Newman's (Lawrenceburg, Ind./Lawrenceburg) extra-point brought it to 23-7.

With just over a couple minutes remaining in the second quarter, John Guilford (Spencer, Ohio/Black River) blocked a 39-yard field goal attempt by David Last to keep it a 16-point game at half.

It was all San Diego in the second half.

Mills flung a pair of third-quarter touchdown passes to cap off 71 and 70-yard drives respectively.

Valpo put up seven points at the onset of the fourth quarter with a familiar scoring play.

Last week, Hoffman hooked up with Tony Taibi (Arlington Heights, Ill./Rolling Meadows) for a 73-yard TD play. Today, the two went back to the well as they responded with an 86-yard touchdown through the air. Valpo's longest scoring play since Oct. 27th, 2007 - when Warren Arnold connected with Steve Ogden for an 86-yard TD pass - changed the score to 37-14. That was all Valpo would muster in the second half though.

The Toreros added 21 points in the final quarter to claim their fifth PFL victory of the season 58-14. San Diego (6-3, 5-1 PFL) scored eight touchdowns on twelve possessions.

Hoffman completed 16 of 24 pass attempts for 202 yards and a pair of touchdowns. The redshirt junior did not throw an interception but was sacked three times.

"We did some positive things in the first quarter, but we didn't do ourselves any favors by giving them good field position," head coach Dale Carlson said afterwards.

Valparaiso (1-8, 1-5 PFL) will travel to Indianapolis next Saturday to challenge Butler (7-3, 5-1 PFL) in a contest for the Hoosier Helmet. Butler knocked off Dayton (6-3, 4-2 PFL) 33-30 Saturday to establish a three-way tie atop the league standings.