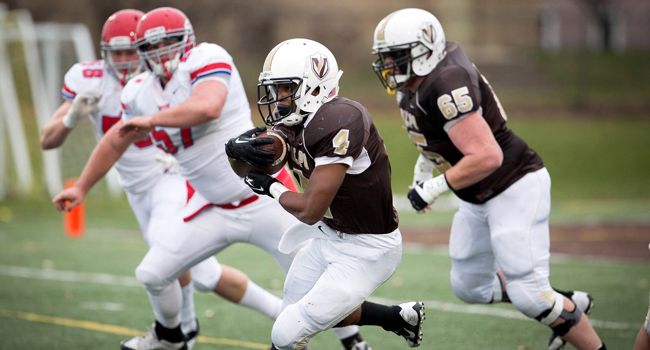 Tanner Kuramata (Rancho Cucamonga, Calif./Claremont) isn't a senior, but he played Saturday as if it were the last game of his career.

The junior recorded a season-high 200 receiving yards on ten catches in addition to grabbing two touchdown passes. However, Dayton (7-4, 5-3 PFL) scored three touchdowns in a matter of four minutes without its offense on the field as the Flyers handed Valpo a 45-20 loss on Senior Day.

For the seventh time this season, Valpo scored the first points of the game. The offense assembled a six-play, 80-yard drive as Eric Hoffman (Manitowoc, Wis./Lincoln) capped it off with a 27-yard toss to Kuramata for a 7-0 lead.

Dayton needed just 50 seconds to respond, however. Quarterback Will Bardo, who was questionable entering Saturday's tilt, hooked up with Gary Hunter for a 72-yard touchdown pass.

Dayton kicker William Will hit a 27-yard chip shot towards the end of the first quarter to give the Flyers a 10-7 lead after 15 minutes.

Jacob Newman (Lawrenceburg, Ind./Lawrenceburg) knotted the game at 10 apiece with a 28-yard field goal of his own with under nine minutes in the half.

The game remained at a standstill until four minutes to play in the second quarter.

On a 2nd and 6 from his own 30-yard line, Hoffman was picked off by Nick Weston. Weston returned the interception 35 yards for a touchdown and a 17-10 lead.

Hoffman and the Crusader offense appeared ready to take advantage of its second opportunity before the end of the half. Valpo was inside the Dayton 40-yard line when Hoffman threw his second interception of the quarter on a 3rd and 6. This one was also taken all the way back for a touchdown.

In what seemed like the blink of an eye, Valpo trailed 24-10.

The Brown and Gold emerged from the break looking to make a defensive stand. The defense was forced to wait, however, as Hunter returned the opening kickoff of the second half 100 yards for a score. The Flyers led 31-10 at that point.

Valpo showed life minutes later, however. Hoffman threw a deep ball up for Kuramata, who secured the pigskin after it pinballed around a pair of Flyer defenders. Kuramata had no one left to beat as he scampered into the end zone for a 78-yard TD. Newman's extra-point brought the Crusaders within two scores, 31-17.

Dayton again wasted no time getting into the end zone on its ensuing possession. Gabe Macis was the recipient of a 63-yard touchdown pass from Bardo on the second play of the drive. The drive was assisted by a roughing the passer penalty on the prior play.

Valpo's final points of the season came on a 21-yard field goal from Newman. The Crusaders had 1st and goal from the two-yard line, but were unable to manufacture a touchdown.

"I'm proud of our kids. They played hard today. If you look at the total game, you take three plays away and it's a much closer game.  In a way, that's the epitome of what the season has been like - eliminating those three plays. Our goal was to keep our defense off the field, and we did that, but unfortunately in the process gave up 14 points." said acting head coach Mike Gravier afterwards.

Senior Pat Derbak (Schaumburg, Ill./Schaumburg) led all defensive players Saturday with 11 tackles to boost his 2013 total over the century mark. Derbak (102) and sophomore Alex Green (Zionsville, Ind./Zionsville Community) (110) were the only two Crusaders to eclipse 100 tackles this season.

Hoffman finished the afternoon 26-for-41 for 387 yards and two touchdowns. With his effort Saturday, the redshirt junior put the finishing touches on a noteworthy season.

Hoffman ended 2013 with the most completions (252), second-most touchdown passes (22), third-most pass attempts (405), and third-most passing yards (2,976) in a season by a Crusader quarterback. His 2,898 yards of total offense also rank third in a single season.

"I can't give (assistant coach) Alex Bailey enough credit. He called our pass game today and did a great job. He really put our kids in a position to be successful," Gravier stated.