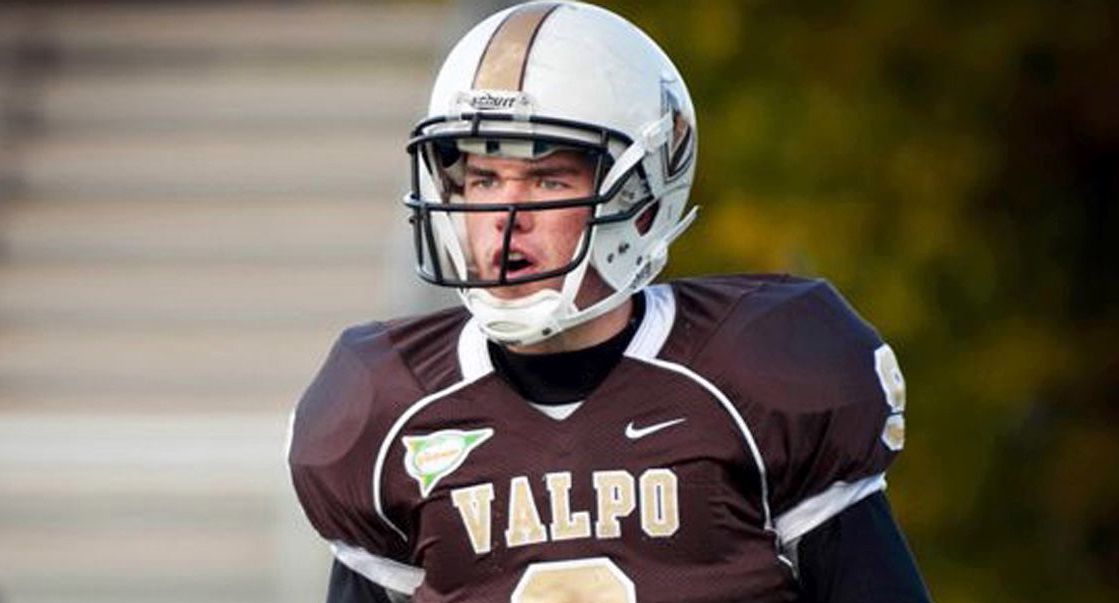 Senior Ben Lehman is one of four candidates up for the starting QB position this season.

While the Dave Cecchini Era may not see its first result until the season opener on Thursday, August 28th, improvements are abundant in Valparaiso.

A brand new weight room completed just days ago inside Kroencke Hall represents just one of the facelifts welcoming Cecchini and his staff. The first-year head coach says the weight room has already accomplished both short and long-term goals for the football program.

"It has done wonders for morale within this team right now. Furthermore, it will pay dividends down the road in recruiting," Cecchini said.

A running track surrounding Brown Field also aims to add character to the facility and enhance the gameday atmosphere. Construction crews are currently putting the finishing touches on the surface just in time for the Crusaders' home opener versus Saint Joseph's on September 6th.

With a week of training camp in the books, we take a look at the 2014 edition of the Valparaiso Crusaders.

The most intriguing storyline of this year's team lies within the quarterback position. Valpo graduated career passing leader Eric Hoffman (706 career completions, 7,221 passing yards) and with it a four-man competition has ensued. Senior Ben Lehman (Elgin, Ill./Saint Edward Central Catholic) is the lone candidate who has taken a collegiate snap. Adept athleticism and experience weigh as his biggest assets. Lehman completed 11 of 22 passes in 2013, but was often called on in short-yardage situations as his elusiveness can move the chains. It appears unlikely at this point that Cecchini will employ a two-QB system based on such third down scenarios, but the head coach admits that is subject to change as he learns more about his players in camp.

Redshirt sophomore Scott Staal (Grand Haven. Mich./Grand Haven) is fully recovered from a knee injury that sabotaged his 2013 season. Cecchini raves about Staal's intelligence - both on and off the field - even going so far as to draw comparisons to former Harvard players. Staal's arm strength also represents an arrow in the 6-foot, 4-inch sophomore's quiver.

Freshmen Dalton Stokes (Vero Beach, Fla./Vero Beach) and Ryan Clarke (Hopatcong, N.J./Hopatcong) round out the competition for the lion's share of snaps under center. Stokes is described as "mobile and instinctive". Couple those attributes with an accurate arm and Cecchini feels as though Stokes will be an impact QB as the season progresses. Clarke's stock is expected to rise once the newcomer becomes more acquainted with an offense that is a stark contrast to what the New Jersey native operated under at Hopatcong. Clarke possesses the most physicality of the four. At 6'5'', 220 lbs., Clarke features a strong arm and considerable athleticism. The freshman is also a highly-capable long-snapper, an asset that impressed Cecchini.

If there's any position that is crowded with experienced talent, it's the receiving corps. Tanner Kuramata (Rancho Cucamonga, Calif./Claremont), Andrew Cassara (Mokena, Ill./Aurora Christian), Fred Gladney (Milwaukee, Wis./Dominican), and Tony Taibi (Arlington Heights, Ill./Rolling Meadows) all return for their final seasons in the Brown and Gold. Kuramata was named a USA College Football Division I-AA FCS Pre-Season All-American last month. He led the Crusaders in receiving yards (879) and touchdown catches (8) in 2013. Kuramata is expected to see some time on special teams as well. Cassara was a viable third-down target last season, and his 58 receptions were a team watermark. He caught three touchdown passes a year ago and will play a predominant role in Cecchini's offense. The head coach lauded the shape in which the senior reported to camp. Listed at 5'9'', Cassara has added noticeable muscle since the 2013 campaign. Gladney took the Pioneer League by storm last season until a wrist injury torpedoed his season. He registered five touchdown catches in just six games and finished the season third in receiving yards despite missing the latter half of the season. Taibi is expected to be in the mix as he owned four 70-plus yard receptions to close out 2013, three of which went for touchdowns.

Three returnees are vying for time at running back: junior Brandon Hall (Muskegon, Mich./Orchard View), redshirt junior Jake Hutson (Blanchard, Mich./Montabella) and sophomore Grayson Bastin (Fort Wayne, Ind./Homestead). Hall received the majority of the rushes last season after Hutson suffered a season-ending knee injury on September 28th versus Campbell. Hall is a beast at 230 pounds but isn't expected to break away for long gains. Named one of two offensive captains for this year, Hutson led Valpo in rushing in 2012 and was well on pace to do so in 2013 until the aforementioned knee injury claimed his last seven tilts. If Hutson re-emerges as the running back of two years ago, points will swiftly follow. Bastin was the chief kick returner a year ago and is in the medley for carries. Cecchini described Bastin as the "niftiest" RB candidate and brings elusiveness to the offense.

Only Sean Cook graduated from last season's offensive line. Stuart Barkley (Overland Park, Kan./Blue Valley Northwest) will man the moat for the QB and rushers. Like Kuramata, Barkley was named a USA College Football Division I-AA FCS Pre-Season All-American weeks. He spent last season at left tackle, but Cecchini alluded to the possibility of the senior shifting to guard.

Captain Alex Green (Zionsville, Ind./Zionsville Community) will anchor the Crusader defense in 2014. The linebacker led the Pioneer Football League in tackles for the majority of 2013 and was a shoe-in for the team's Defensive Most Valuable Player Award. Cecchini applauded his leadership abilities, citing "he does everything you ask." Cecchini also spoke highly of fellow linebacker Ryan Mundy (West Lafayette, Ind./Harrison), a senior who contains as much athleticism and explosiveness as Green. A nuisance for opposing offenses, Mundy accumulated 63 tackles last year along with two sacks, a pick, and a fumble recovery. Youth is primed to prosper at several defensive positions. Freshman Kye Hall (New Smyrna Beach, Fla./New Smyrna) is making a strong cases for a starting spot at linebacker. Senior Colin Burke (Orlando, Fla./Freedom) and junior Colton Sanchez (Marion, Iowa/Linn-Mar) should see a good deal of time at linebacker as well.

Brandon Riley (Chicago, Ill./Morgan Park) is another freshman who has raised eyebrows. Cecchini boasted Riley as a "special talent" whose speed is amongst the best on the team. The freshman should thrive under the tutelage of veterans Devan Gadson (Orlando, Fla./Freedom) and Melvin Graham III (Indianapolis, Ind./North Central). Gadson and Graham III are slated as starters at cornerback and safety, respectively. Veteran Dale Cook (Lake in the Hills, Ill,/Jacobs [South Dakota State]) led the team in pass deflections and broke up a team-high four passes a season ago. Cook headlines a deep cornerback position. Fellow upperclassman Ryan Singh (Fort Lauderdale, Fla./Cardinal Gibbons) will see significant time at safety as well.

Special teams is the one area that has been most difficult for Cecchini to evaluate. Construction of the aforementioned running track around Brown Field has prohibited the team access to the field - and with it the goalposts. Valparaiso High School and Eastgate Field have served as a timeshare for team practices. High school goalposts are wider than college football's so the Valpo High field doesn't provide the proper litmus test for field goal kickers. No uprights currently reside at Eastgate Field.

Redshirt sophomore Alex Kozlowski (Novi, Mich./Detroit Catholic Central) did an admirable job of replacing the departed Greg Wood, a three-time All-PFL punter for the Crusaders from 2009-2012. Kozlowski pinned opponents inside their own 20 on twelve different occasions, netting an average of over 38 yards per punt.

Valparaiso opens its season Thursday, August 28th at Western Illinois at 6 pm CT. The Brown and Gold will play under the lights for their home opener on Saturday, September 6th at 7 pm CT. Todd Ickow will again serve as the voice of the Crusaders on WVUR (95.1 FM, Valparaiso).