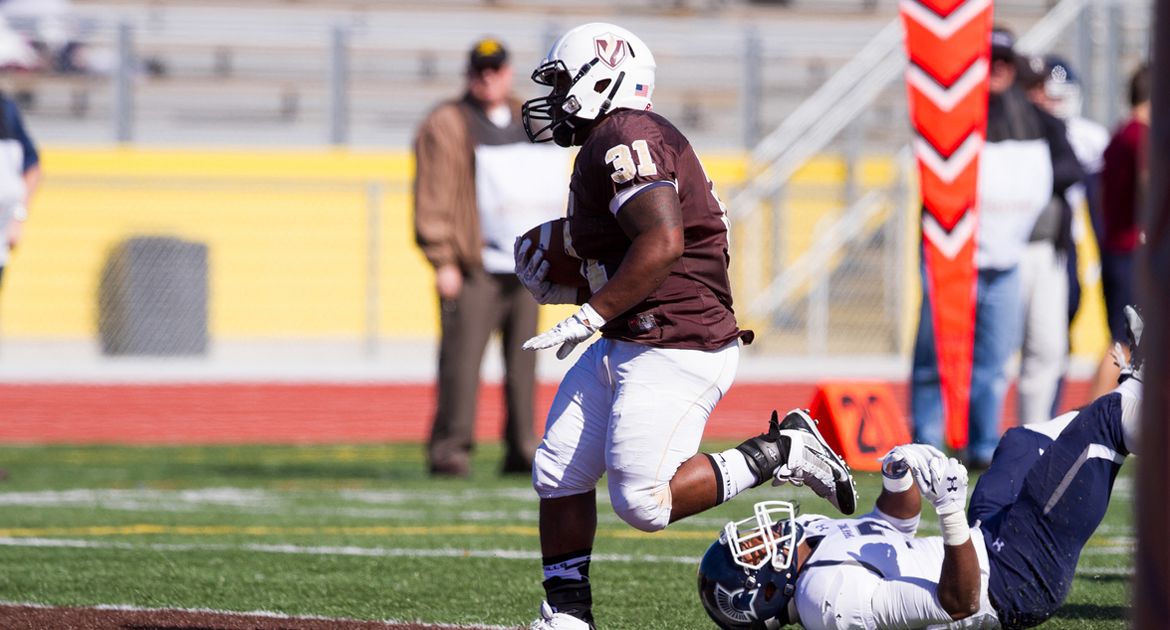 This Week in Crusader Football: Fresh off a 55-7 thumping of upstart Missouri Baptist, the Crusaders are thrust back into PFL play as Drake represents the final leg of a three-game homestand. Valpo allowed only one drive of over 20 yards versus the Spartans last Saturday, but the Bulldogs are a much different animal. Early returns show Drake deserves to be in the conversation of PFL title contenders. The Bulldogs collected convincing wins over Marist and Davidson with a two-possession loss to undefeated Jacksonville sandwiched between those victories.

On the Air: For the ninth straight season, the Valpo Sports Radio Network is home to all 12 Crusader football games in 2014. All 12 games can be heard live on WVUR (95.1FM, Valparaiso), online through www.valpoathletics.com. Todd Ickow will handle all the play-by-play, with Dave Huseman adding the color commentary this week. Links to the video, audio, and live stats will also be available through www.valpoathletics.com.

Head Coach Dave Cecchini: Cecchini is 2-4 in his first year at Valparaiso. His first head coaching win came on Sept. 20th, 2014 when the Crusaders defeated William Jewell 39-30. Cecchini most recently served as offensive coordinator/quarterbacks coach at Lehigh where the Mountain Hawks captured a Patriot League Championship in 2010. His path to Valpo also included stops at Harvard and The Citadel, where he mentored QB Ryan Fitzpatrick and WR Andre Roberts to eventual professional careers. While Cecchini made a name for himself as offensive coordinator at Harvard in 2003, the Crimson compiled the fourth-best offense in the nation en route to an undefeated 10-0 season and an Ivy League Championship. Furthermore, The Citadel set 16 offensive records under his tutelage. As a receiver at Lehigh, Cecchini garnered All-American honors and established numerous single-season school and Patriot League records.

All-Time Series: Drake leads the all-time series over Valparaiso, 18-3, including ten consecutive victories over the Brown and Gold. The Crusaders last win over the Bulldogs came on Oct. 25th, 2003 when they captured a 51-45 shootout in overtime at Brown Field. In the history of the series, Valpo is 3-8 versus Drake at home.

Scouting Drake: Through six games, the Bulldogs have been involved in only one game decided by 14 points or fewer. Despite some lopsided affairs, Drake has just an overall point differential of -5. The Bulldogs have scored 18 touchdowns, the same number as their opponents. Drake features a rather balanced offense, having rushed the ball 262 times compared to 222 pass attempts. Quarterback Andy Rice has accumulated 1,263 yards despite a touchdown-to-interception ratio of 7:8. In last season’s tilt at Drake Stadium, Rice went 27-for-41 for 297 yards and a TD versus the Crusaders. Valpo actually led 10-7 in the fourth quarter of that contest before the Bulldogs rattled off 16 unanswered points. Conley Wilkins managed just 35 yards on the ground that day, but his two touchdown runs propelled Drake to a 23-10 victory.

In addition to the offensive line, the Crusader RB triumvirate of Brandon Hall, Jake Hutson, and Grayson Bastin will have their hands full with Drake’s front seven. Senior middle linebacker John Hugunin remains one of the best in the FCS football. Last season, he led the PFL in tackles with 113 and was ranked 13th nationally in that category. However, Hugunin has not played since Drake’s Sept. 20th game versus Marist. Nevertheless, he’s listed as the starter on the Bulldogs’ two-deep. Regardless, Drake’s defensive line is as stout as they come. The starting unit comprised of Mack Marrin, Brett Park, Matt Acree, and Michael Vankat have combined for 12.5 sacks and 18 tackles for a loss. The Crusaders can’t expect much relief in the secondary, either. Drake’s secondary is stocked with experience led by senior cornerbacks John Bloss and Brad Duwe. Free safety Bob Quilico is enjoying an active senior campaign with 45 tackles, an interception, six pass deflections, and a fumble recovery. Points may very well come at a premium for the Brown and Gold.

The kicking game has been hit-or-miss for the Bulldogs. If a 37-yard field goal attempt presents itself to Bulldog head coach Rick Fox, he might be inclined to keep his offense on the field. Kicker Ben Tesson is 3-for-6 on the season and all three of his misses have come from that distance. The sophomore has split the uprights on attempts from 43, 35, and 25 yards.

Head Coach Rick Fox: Fox is in his first season at the helm of the Bulldog football program. The Wheaton College grad took over for Chris Creighton in December of 2013. He served as offensive line coach at Aurora (Ill.) University from 1987-92 after he began his coaching career at Wheaton in 1986. Fox returned to Wheaton as offensive line/special teams coordinator from 1992-99, and joined the Drake coaching staff in 2008 following an eight-year stint at Centre College in Kentucky. Fox served as assistant head coach, offensive line coach, and special teams coordinator at Drake prior to taking over as head coach.

2,000 Yard Club: Senior Tanner Kuramata’s 13-yard reception in the second quarter of last Saturday’s game gave him 2,000 yards for his career. He is just the sixth player in school history to achieve that feat.

We’re (Not) Going Streaking: The Bulldogs have yet to record back-to-back wins or losses so far.

Lehman’s Moat: Crusader QBs have been sacked just twice this season - the fewest number of times in the PFL and the second-fewest in all of FCS football.

Go For It: Opponents are 6-for-8 on fourth down against the Bulldog defense.