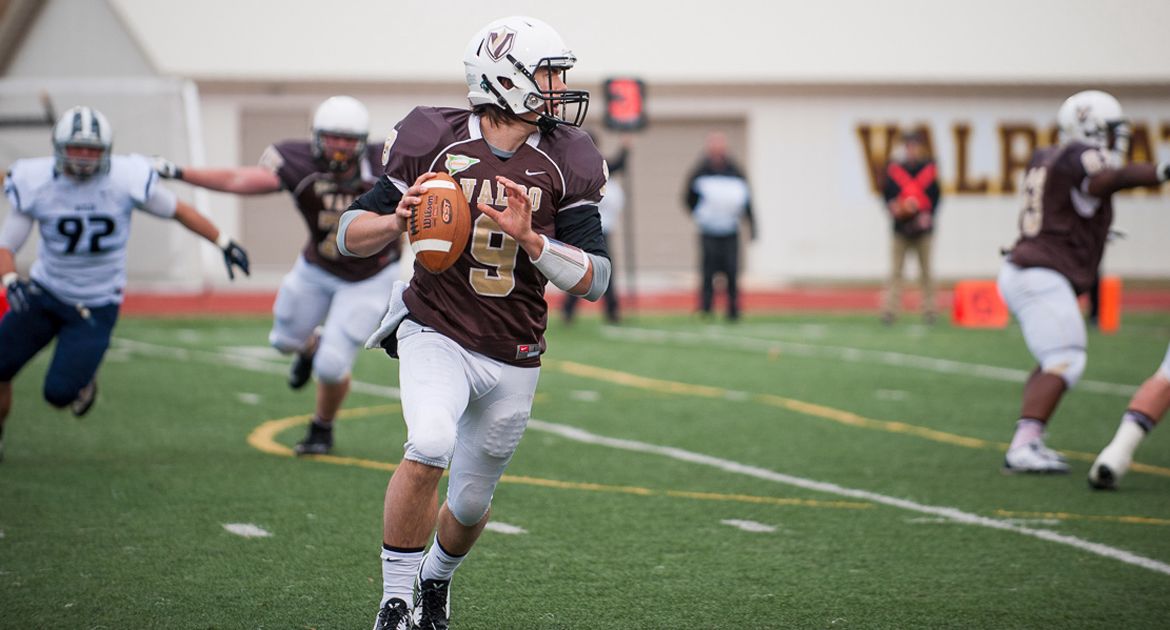 What a difference a year makes.

On the eve of the anniversary of Valpo's worst loss to Butler in the 87-year history of the series, the Crusaders won a 17-3 contest at Brown Field on Saturday afternoon.

"I'm incredibly proud of this team. They didn't give up. The effort was outstanding," head coach Dave Cecchini said.

The Bulldogs were able to move the chains once on their ensuing possession, but the Valpo defense forced a Brian Akialis punt near the Butler 40.

The Brown and Gold took over on their own 29-yard line with 12:21 remaining in the half.

Lehman hooked up with senior Andrew Cassara (Mokena, Ill./Aurora Christian) on a 22-yard reception to advance the Crusaders to midfield. Jake Hutson (Blanchard, Mich./Montabella) contributed a key 11-yard dash to move Valpo to the 34. Five plays later, Lehman fired a missile across the middle to Tony Taibi (Arlington Heights, Ill./Rolling Meadows) for a 24-yard score. Newman's extra point gave the Crusaders a 14-0 advantage with eight minutes left in the half.

The Bulldogs got on the scoreboard in the waning seconds of the second quarter by virtue of a quick two-minute drive. Quarterback Malcolm Weaver drove Butler 71 yards in less than a minute and a half before Jon Treloar split the uprights on a 26-yarder as time expired.

Neither team put points on the board in a third quarter where Valpo threatened numerous times but opted to control the clock in exchange for shots downfield.

Newman provided additional cushion with a 25-yard field goal with five minutes left in the game. Valpo's smothering defense didn't yield a first down the rest of the game.

John Guilford (Spencer, Ohio/Black River) led the defensive effort for the Brown and Gold with three sacks, four tackles for a loss and seven overall stops. Guilford now has 12.5 tackles for a loss and five sacks on the season. Green pitched in eight tackles, forced a fumble, and picked off the aforementioned first-quarter pass. J.J. Nunes (Baltimore, Md./Baltimore Lutheran) paced Valpo in tackles with ten, seven of which were solo stops.

Lehman finished the afternoon 18-for-33 for 157 yards, and two touchdowns opposite one interception. He added 45 yards on the ground on three carries. Brandon Hall (Muskegon, Mich./Orchard View) again carried the load at running back as he rushed the ball 23 times for 72 yards. Cassara added a game-high seven catches for 53 yards in his first game back since October 8th versus Missouri Baptist.

The most compelling stat was the time of possession. The Crusaders controlled the ball for 36:54, the key to Valpo's defense producing its best effort in several years.

The three points allowed were the fewest by a Valpo defense versus Butler since 1945 when the Crusaders pitched a 6-0 shutout at home. Saturday represented the 73rd game in series history.

"From a coaching standpoint, to be able to come in and win this big rivalry game in our first year is pretty special," Cecchini said.

Valparaiso will head to San Diego (8-1, 6-1 PFL) next Saturday to face the first-place Toreros for the final road game of the 2014 campaign. Links to the audio, video, and live stats are available at ValpoAthletics.com.