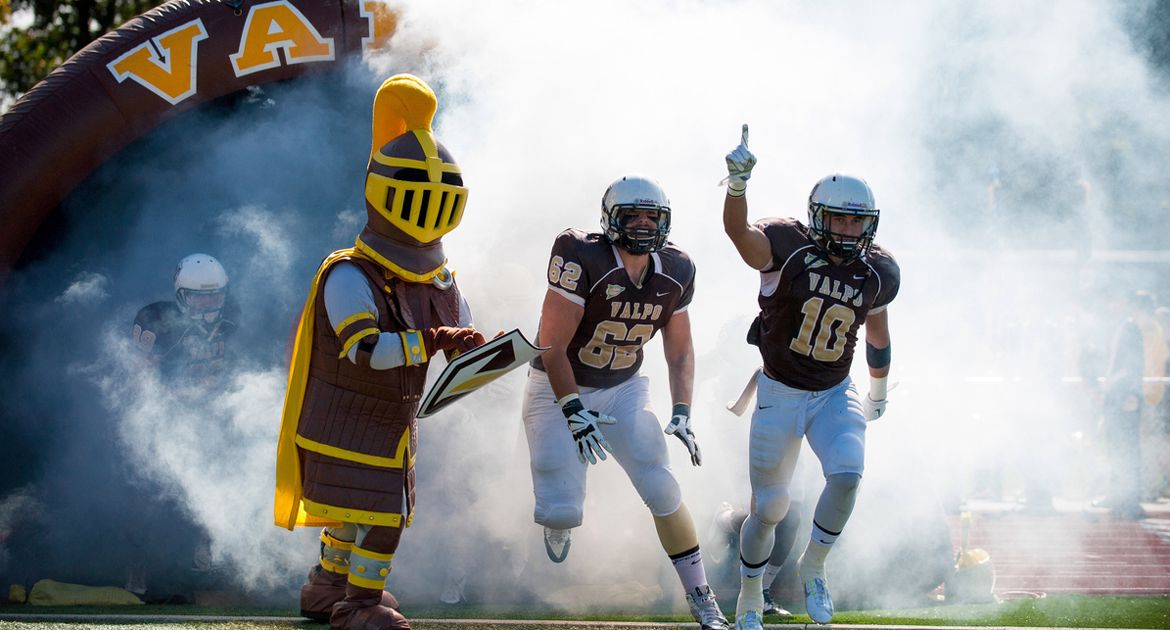 This Week in Crusader Football: A season chock full of progress comes to a close Saturday afternoon as Valpo welcomes 1-10 Davidson to Brown Field. The Crusaders are coming off a game where they were four seconds from upsetting the PFL Champions on their home turf. Meanwhile, the Wildcats return to the scene of their last win in league play. Davidson has lost 15 straight PFL contests since knocking off the Crusaders 28-27 in overtime on November 10th, 2012 in Valparaiso. Saturday represents the final time that a number of seniors will take the field for the Brown and Gold.

On the Air: For the ninth straight season, the Valpo Sports Radio Network is home to all 12 Crusader football games in 2014. All 12 games can be heard live on WVUR (95.1FM, Valparaiso), online through www.valpoathletics.com. Todd Ickow will handle all the play-by-play, with Dave Huseman adding the color commentary this week. Links to the audio and live stats will also be available through www.valpoathletics.com.

Head Coach Dave Cecchini: Cecchini is 3-8 in his first year at Valparaiso. His first head coaching win came on Sept. 20th, 2014 when the Crusaders defeated William Jewell 39-30. Cecchini most recently served as offensive coordinator/quarterbacks coach at Lehigh where the Mountain Hawks captured a Patriot League Championship in 2010. His path to Valpo also included stops at Harvard and The Citadel, where he mentored QB Ryan Fitzpatrick and WR Andre Roberts to eventual professional careers. While Cecchini made a name for himself as offensive coordinator at Harvard in 2003, the Crimson compiled the fourth-best offense in the nation en route to an undefeated 10-0 season and an Ivy League Championship. Furthermore, The Citadel set 16 offensive records under his tutelage. As a receiver at Lehigh, Cecchini garnered All-American honors and established numerous single-season school and Patriot League records.

All-Time Series: Davidson leads the all-time series over the Crusaders, 7-1, with the Wildcats having won two in a row over the Brown and Gold. The Crusaders’ lone victory over Davidson came on Oct. 11th, 2008 when they won a 35-29 overtime tilt at Brown Field. Two of the eight games in the series have gone to OT.

Scouting Davidson:The Wildcats are a young squad, as evidenced by seven underclassmen listed as starters on their two-deep, compared to just four seniors. Entering this season, Davidson and Valpo had similar histories over the last two years. Both teams had just two wins during that span, and each had experienced a winless campaign in the last four years. Davidson’s offense averages a shade over 24 points per game. The Wildcats have been successful through the air, regardless of who’s under center. Senior J.P. Douglas (172-261-6, 1,715 yards, 11 TD; 66 rush, 160 yards, 4 TD) continues to serve a suspension stemming from an off-field incident. That opening has been filled by true freshman Taylor Mitchell. Through his baptism by fire, Mitchell has completed just under 50% of his passes, and has been bruised by 10 interceptions in 124 pass attempts. A pair of fellow true freshmen in Jeffrey Keil and Austin Wells represent the running attack for Davidson. Keil has racked up six touchdowns and is seven yards shy of 600 with just 127 carries. Wells averages 3.5 yards per rush and has found the end zone once.

The Crusader secondary will have their hands full with William Morris, the top receiver in the PFL. Morris is 7th in FCS in receiving yards (1,102) and only one player in college football averages more catches per game - 8.0 - than the junior (Sacramento State’s DeAndre Carter). Trey Huelskamp (45 rec., 431 yds., 2 TD) and Cam Cheuvront (36 rec., 332 yds., 3 TD) complement the receiving core, keeping opposing defenses honest.

Davidson’s defense has taken its lumps this year. Allowing 40.9 points per game in 2014, the Wildcats rank in the bottom 10 in Division I FCS. Opposing teams have put up 50 points on Davidson five different times this season. Away from Richardson Stadium, the Wildcats surrender an average of 45 points. Senior Matt Casey leads the defense with 93 tackles and has logged double-digit stops in four contests. Defensive end Thomas Sykes has accumulated a team-high four sacks in his rookie campaign.

Freshman Trevor Smith has been successful on 9 of his 13 field goal attempts (70%) thus far. His season long is 44 yards. Fellow freshman Jaris Scott handles the punting for Davidson. Scott averages 32.7 yards per boot. Two of his 35 punts have been blocked.

Head Coach Paul Nichols: Nichols is in his second season at the helm of the Wildcat football program. Nichols, 33, is the second-youngest head coach in all of Division I football. Following the conclusion of his collegiate playing days, he began his coaching career as a graduate assistant at Ohio State under Jim Tressel in 2004. After two seasons in Columbus, Nichols spent two seasons at Marshall and Toledo each. In 2012, Illinois head coach Tim Beckman named him Director of Player Personnel. Davidson scooped him up after one season in Champaign and named him head coach in December. A Davidson alum (‘03), Nichols graduated as the school record holder in career passing yards, completions, and touchdown passes.

Parting Shots: True freshman Spenser Pennington has caught five passes on the season; three of those have been for a touchdown...Ben Lehman needs just 20 passing yards Saturday to reach 2,000 for the season...Davidson has returned just one punt this season...Kye Hall’s interception last Saturday made him the sixth different Crusader to record a pick this season...both the Wildcats and their opponents have fumbled the ball 16 times with nine of those lost...Valpo’s four lost fumbles rank 8th in the FCS...if Alex Green registers three tackles Saturday, it’ll give him back-to-back 100-tackle seasons...only Citadel (0.45) has allowed fewer sacks per game than the Crusaders (0.36)...Valpo's eleven-game schedule last year yielded a -264 point differential. Through eleven games this season that figure is -64, exactly a 200-point improvement from 2013.