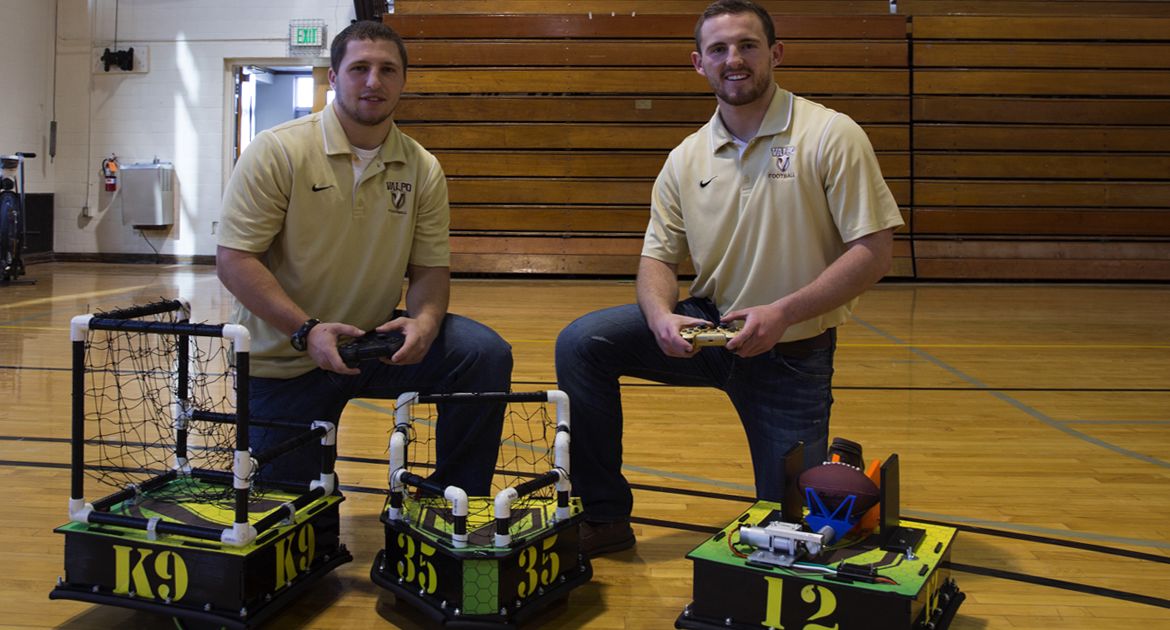 It's not often the words "Valpo", "Notre Dame", and "combine" are used in the same sentence with respect to football.

However, Hayden Hast, Jake Hutson, and J.T. Rotroff have devised a unique way for the two schools to share a common bond. The trio of Crusader football players has spearheaded Valparaiso University's first Mechatronic (Robotic) Football team. The idea is as creative as it is neat.

Directed by Sony PlayStation controllers, each "player" was produced and manufactured in the engineering department on campus. While there are no restrictions on the shape, each robot - kicker and center excluded - must fit within a 16-inch square and a 24-inch tall box. Imagine a pizza box on wheels - just with exponentially more sophisticated technology.

He cites his time on the turf as continuing education towards his role as play-caller during the 8-on-8 battle of the brains.

"We actually use our play-calling system that we learned out on the field to call our plays so the other team doesn't know our plays. We also took a couple of trick plays from Coach (Dave) Cecchini," Hast said.

Games are typically held inside gymnasiums. Per the rules of College Mechatronic Football, the "field" is 94 feet long by 50 feet wide. End zones extend 15 feet past the goal line. The playing field is divided laterally into three 34 1/3-foot sections.

Robotic football is equal parts engineering and physics. The robots that serve as quarterback and kicker possess catapult systems that double as arms and feet. Running the ball is undoubtedly the safest option, but the points can accumulate if one can complete passes with relative consistency. A completed forward pass that travels between five and 15 feet is deemed a "short pass" and results in the offensive team earning seven points. Any completed toss farther than 15 yards fetches 12 points. A play comes to an end with either scoring or when the impact reaches approximately two g-forces. At that point, LED sensors on the robot will illuminate and render the device "dead" for two seconds.

Hast and Hutson concede countless hours have gone into fine-tuning each play and getting fellow engineers up to speed. In that way, it's mirrored the real thing.

The evolution of robotic football has swept engineering departments all across the Midwest. Notre Dame was the first team brought into existence. Ohio Northern, Purdue, IUPUI, and the U.S. Naval Academy followed. Valpo's squad made its first public appearance at Notre Dame's Robotic Football Challenge on March 29th. One of five schools in attendance, Valpo took top honors overall after finishing first in the 60-foot shuttle, the three-cone drill, and the quarterback accuracy.

Valpo hosts Purdue University-Kokomo on Saturday in its first home game inside Hilltop Gym. The Valpo coaching staff has even gotten in on the fun. Recruiting coordinator Vinny Giacalone and tight ends coach Sami Caygoz have agreed to officiate Saturday's premiere.

The Crusaders and Fighting Irish may never meet in competition at Notre Dame Stadium or on Brown Field. But the ingenuity and hard work exhibited by Hast, Hutson, and their team of tech-savvy, football-loving engineers have made them Champions in the Classroom.