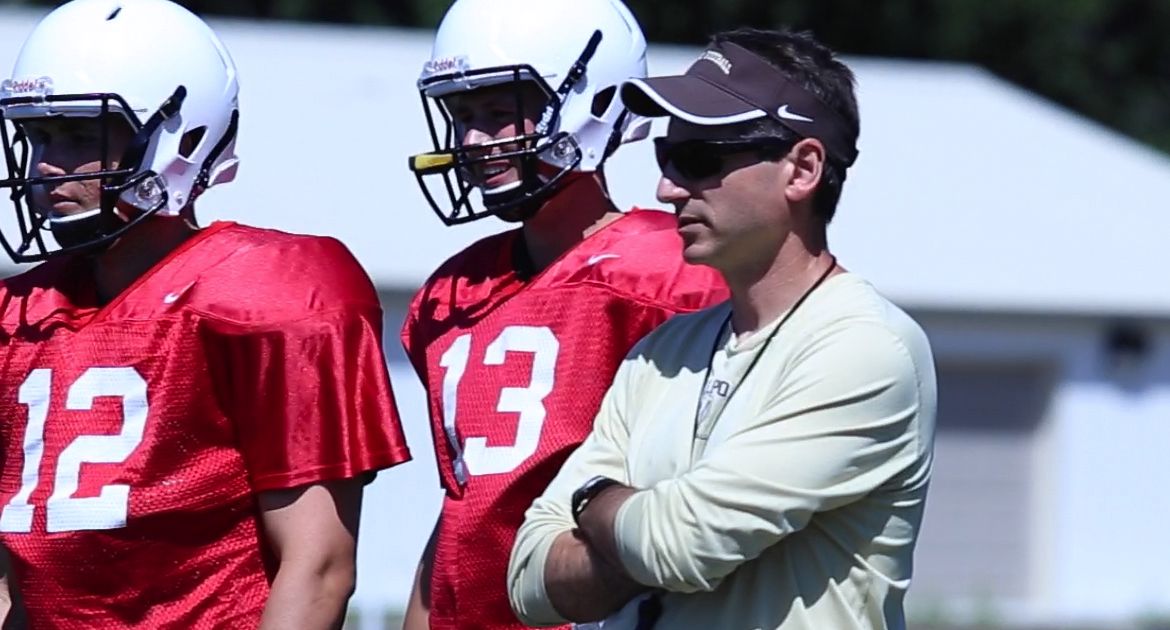 Head coach Dave Cecchini embarks on his second season at the helm of the Crusader football program.

The unofficial launch of the 2015-16 athletic year takes place Thursday as more than 100 football players are expected to report to campus for preseason camp.

Head coach Dave Cecchini and his staff are prepared to welcome just over four dozen incoming freshman. While that may create an August learning curve, Valpo's newest class represents the next step in building a team poised to compete for a Pioneer Football League title in the near future.

Old and new Crusaders alike will be greeted with a renovated locker room. The team's latest facility facelift comes a year after the ribbon was cut on a new, more modern weight room. The cosmetic upgrades are aligning themselves with a program gaining substance to accompany style.

"The foundation has been laid. Guys know how to practice, how to go about their business," Cecchini said.

The second-year head coach returns key cogs on the defensive side of the ball. John Guilford (Spencer, Ohio/Black River) and Alex Green (Zionsville, Ind./Zionsville Community) project to receive 11 starts for the third consecutive year. Linebacker Kye Hall (New Smyrna Beach, Fla./New Smyrna) exceeded any realistic predictions for a freshman in 2014. He amassed 68 tackles, 4.5 for a loss while playing in all 12 games last fall.

Senior Cody Cotton (Maywood, Ill./Walther Lutheran), whose season was cut short by an injury sustained in the Marist game on October 4th, is a strong candidate to fly under the radar of opposing coaching staffs.

All the indicators are present for the Brown and Gold to take another step forward defensively. Last year's D enjoyed a 156-point improvement - in one more game - over its predecessor. The 2014 Crusaders surrendered just 28.1 points per game, down nearly 17 points from a gaudy 44.8 PPG figure in '13. The unit also touted a deduction of 100.1 yards per game allowed in a year's time.

"We're going to lean on our defense, especially early on. Experience is our biggest asset there and we'll need them to help this team while our offense gets more acquainted," Cecchini said.

Questions do exist at the quarterback position following the graduation of Ben Lehman. Lehman accounted for 91% of the team's passing yards in 2014. Furthermore, the current roster is in pursuit of its first passing touchdown. Scott Staal (Grand Haven, Mich./Grand Haven), regarded as one of the most cerebral players on the roster, will take the first snap behind center this week. He'll be met with ample competition in the form of returners Ryan Clarke (Hopatcong, N.J./Hopatcong) Dalton Stokes (Vero Beach, Fla./Vero Beach) and newcomers Jake Paliga (Chesterton, Ind./Andrean) and Conner Smith (Indianapolis, Ind./Perry Meridian).

Cecchini mentioned the team could see as many as three different QBs in the first two games.

Maturity reappears in the backfield with all three running backs in uniform. Brandon Hall (Muskegon, Mich./Orchard View), who pounded his way to ten rushing TDs last year, is quickly returning to form following a minor procedure to alleviate a high ankle injury that nagged the senior for a good chunk of 2014. Jake Hutson (Blanchard, Mich./Montabella) and Grayson Bastin (Fort Wayne, Ind./Homestead) round out a post that Cecchini deems the unit's strength.

Morgan established himself as the flashiest and most dynamic player on the field many times in 2014. His freshman season may prove to be a springboard for bigger and better things in 2015.

"Jarrett knows the offense much better. He'll be less situational this year. If we ran 15 plays with him in the game last year, he'd ideally touch the ball five times. This year, we hope for him to be on the field for 50 snaps and to get the ball 15 times," Cecchini alluded.

Estimating a number of wins to a team in the first week of August is a fool's errand. Cecchini seeks to face a difficult early schedule and score improvement once PFL play is underway.

"We're happy with the talent we have here. Once our offense gets in sync, we're going to be a good on both sides of the ball," Cecchini concluded.