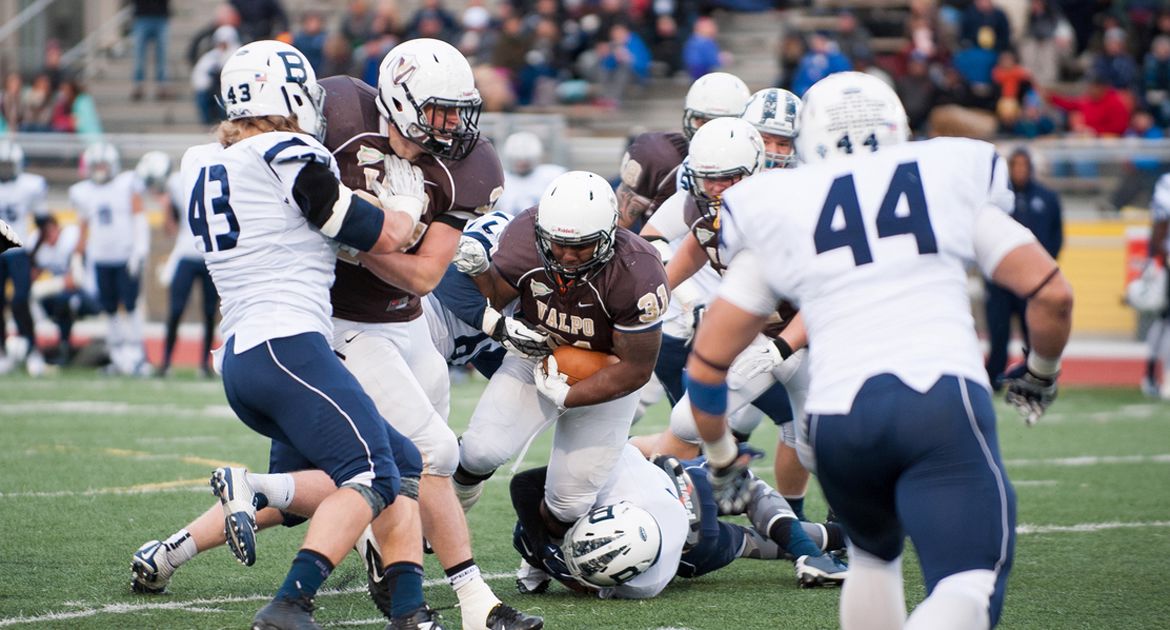 This Week in Crusader Football: The 95th edition of Valpo football begins Thursday night in the Bluegrass State when the Crusaders take on the Eastern Kentucky Colonels. 2015 represents the third straight year that the Brown and Gold have opened against an FCS scholarship program. EKU welcomes the Crusaders into Roy Kidd Stadium, where the Colonels own a 191-43-1 record since the facility opened in 1969.

On the Air: Todd Ickow is back in the booth calling the action on the Valpo Sports Radio Network. For the 10th straight season, WVUR (95.1 FM, Valparaiso) is home to all 11 Crusader football games in 2015. Fans can also tune in through valpoathletics.com. Ickow will handle all the play-by-play, with Brad Collignon serving as color commentator. The Ohio Valley Conference (OVC) Digital Network will also carry live streaming of Thursday night’s season opener. Links to the audio, video, and live stats will also be available through www.valpoathletics.com.

All-Time Series: Eastern Kentucky leads the all-time series over Valparaiso, 2-1. The Crusaders and Colonels played for three consecutive seasons from 1945-47. Valpo won the first-ever meeting, 7-6, at home on October 27th, 1945. EKU responded with victories of 12-7 and 18-0 in the subsequent tilts.

Scouting Eastern Kentucky: Fresh off a 9-4 season where they averaged 31.2 points per game, the Colonels project to be an offensive juggernaut again in 2015. Redshirt senior Dy’Shawn Mobley is the straw that stirs the drink for Coach Hood and the EKU Colonels. The running back averaged 5.8 yards per rush en route to a junior season that saw him finish nine yards shy of 1,500 while racking up 20 touchdown carries. He was compensated to the tune of OVC Player of the Year honors and was a finalist for the Walter Payton Award. 2014 was Mobley’s first season in Richmond following his departure from University of Kentucky in 2013.

Eastern Kentucky operated under a two-QB system last season. Redshirt junior Bennie Coney is a holdover from the 2014 tandem. The former Cincinnati Bearcat threw for a team-high 1,185 yards a year ago and displayed the ability to elude pressure when necessary. Jeff Glover and Devin Borders pack a 1-2 punch as good any in the Ohio Valley Football Conference at wide receiver. Glover, listed at 6’5’’, recorded team watermarks in catches (43) and receiving yards (746) while the 6’6’’ Borders snagged 38 passes for 533 yards and a team-most five TDs. The average offensive lineman on EKU’s two-deep is just over 287 pounds.

Noah Spence will make his long-awaited debut for the Colonels on Thursday. The 2013 First Team All-Big Ten defensive end transferred to EKU from Ohio State following a sophomore campaign that yielded 14.5 tackles for a loss and eight sacks (2nd in Big Ten). Senior defensive back Stanley Absanon received a Preseason All-OVC Team nod after picking off four passes and breaking up nine in 2014. He garnered National FCS Defensive Player of the Week accolades in Week 2 as he spearheaded the Colonels to a 17-10 upset of the Miami (OH) RedHawks with a pair of picks, including one for a 55-yard TD. He’s expected to pull double duty for Coach Hood as Absanon is slated to return punts and kickoffs.

Redshirt junior Zack Burgy-VanHoose is the heir apparent to Andrew Lloyd at kicker. Burgy-VanHoose’s lone attempt last season was blocked from 20 yards out.

Head Coach Dean Hood: Hood is in his eighth season at the helm of the Eastern Kentucky football program. Hood, a 1986 graduate of Ohio Wesleyan, enjoyed stints at Ohio and Wake Forest before becoming just the third man in the last 50 years to lead the Colonels. He owns a 49-33 career record and has led Eastern Kentucky to three playoff appearances (‘08, ‘11, ‘14) in his first seven years. Hood was rewarded for his first playoff appearance with an Ohio Valley Conference (OVC) Coach of the Year nod.

Crusader Crumbs: The Crusaders are 3-1 all-time on Sept. 3rd...of the 2,489 receiving yards accumulated by Valpo receivers last season, 718 of those are returning (28.8%)...sophomore Jarrett Morgan amassed 78 all-purpose yards through the first five games of 2014; he averaged 106 all-purpose yards per game over his final five tilts...Morgan led the country in average kickoff return yards (34.9)...the Brown and Gold outscored opponents 96-87 in the 3rd quarter of games last season; it was only the second time in the last seven seasons they’ve outscored an opponent in any quarter since (2012, 3rd quarter)...Valpo led the nation in fewest sacks allowed per game last season (0.42)...the Crusaders enter Thursday’s opener with a combined 193 passing yards and zero career TD passes on the roster from the QB position...after facing Morehead State for three straight years (2012-14), Eastern Kentucky faces a PFL opponent for the fourth consecutive season.