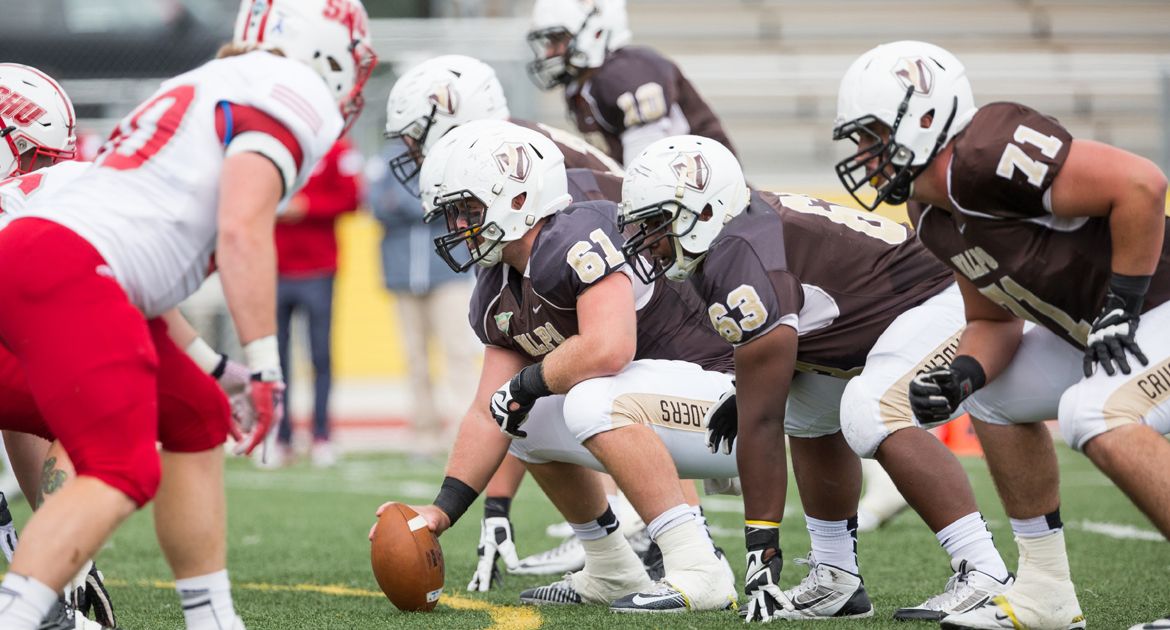 This Week in Crusader Football: The Crusaders welcome College of Faith (Ark.) to Valparaiso as the Brown and Gold look to move past last Saturday’s setback against Sacred Heart. 2015 marks the inaugural year of athletics for the Warriors. They lost their program debut to McKendree University, 68-0, on Saturday, Sept. 5th at Leemon Field in Lebanon, Illinois.

On the Air: Todd Ickow is in the booth calling the action on the Valpo Sports Radio Network. For the 10th straight season, WVUR (95.1 FM, Valparaiso) is home to all 11 Crusader football games in 2015. Fans can also tune in through valpoathletics.com. Ickow will handle all the play-by-play with Dave Huseman serving as color commentator. Saturday also marks the first of three ESPN3 live football broadcasts. Links to the audio, video, and live stats are posted at www.valpoathletics.com.

All-Time Series: Saturday will be the first ever matchup between Valpo and College of Faith (Ark.). In fact, it will represent just the second game ever for the Warriors.

Scouting College of Faith: Located in West Memphis, Arkansas, College of Faith will play its second game in program history Saturday at Brown Field. McKendree University dealt the Warriors a 68-0 defeat in its debut on Sept. 5th. McKendree is a D-II institution that competes in the Great Lakes Valley Conference (GLVC), the same league as Saint Joseph’s.

The Bearcats racked up 352 yards of total offense while limiting the Warriors to -4. McKendree returned the first two College of Faith punts back for touchdowns in a 28-point first quarter. Four different Bearcats recorded touchdown carries as part of a 268-yard rushing day. The home team also denied the Warriors a first down.

College of Faith will play a seven-game schedule this fall. After a bye week next week, they’ll travel to Houston Baptist on Oct. 3rd before heading to Rolla on Oct. 10th to take on Missouri Science & Technology. Their lone home game will take place Oct. 17th when College of Faith (Charlotte) makes the trip to West Memphis.

Many Warriors pulled double duty on the gridiron on Sept. 5th, a by-product of having 21 players participate. Quincy Williams took the snaps at QB for College of Faith and is also listed as a strong safety. Williams attempted four passes, completing one, but throwing one for an interception. Chris Boykin was on the receiving end of Williams’ three-yard completion. Jeremiah Blackwell registered the most rushing attempts (9) of any Warrior as he trekked 19 yards. Cordarius Johnson, listed at running back and linebacker, dashed for 12 yards on four carries, also.

Marico Williams, who’s expected to see time at tight end and linebacker, paced the College of Faith defense with eight tackles - five solo - at McKendree. Teammate Mario Martin, a linebacker and fullback, pitched in six stops, including one for a two-yard loss.

Head Coach Sherwyn Thomas: In addition to serving as head football coach at College of Faith, Sherwyn Thomas is also the department’s director of athletics. Thomas played football at Mississippi Valley State University and has coached various sports for over two decades. He’s held the position of AD since College of Faith’s inception.

Crusader Crumbs: This is the second season that the Crusaders have hosted a team in its augural season; Valpo defeated upstart Missouri Baptist, 55-7, at Brown Field last Oct. 11th...last season, Valpo ranked last in the PFL and 8th-to-last in all of FCS in takeaways (12 in 12 games); through two games, the Brown and Gold have recorded five takeaways, good for 2nd in PFL and 16th in FCS...conversely, the Crusaders led the nation in sacks allowed in 2014 (5), but have already surrendered eight through the first two tilts...Valpo has been one of the least-flagged teams since Cecchini took over in 2014; they led the PFL a year ago (4.67 penalties/game) and are currently 2nd in the league with 5.00 transgressions per game...junior J.J. Nunes has forced a fumble per game while starring in the Crusader secondary; that number ranks third in the nation...Frank Catrine’s 16.3 yards per punt return is 11th in the nation and second in the PFL, behind only Jacksonville’s Terrance Bryant (19.2)...Valparaiso is 4-4 all-time on Sept. 19th, and 2-1 at home...redshirt junior Alex Kozlowski is six punts away from 100 for his career...through his first twelve career games, Jarrett Morgan has amassed 800 all-purpose yards while averaging 30.4 yards per return on kickoffs.