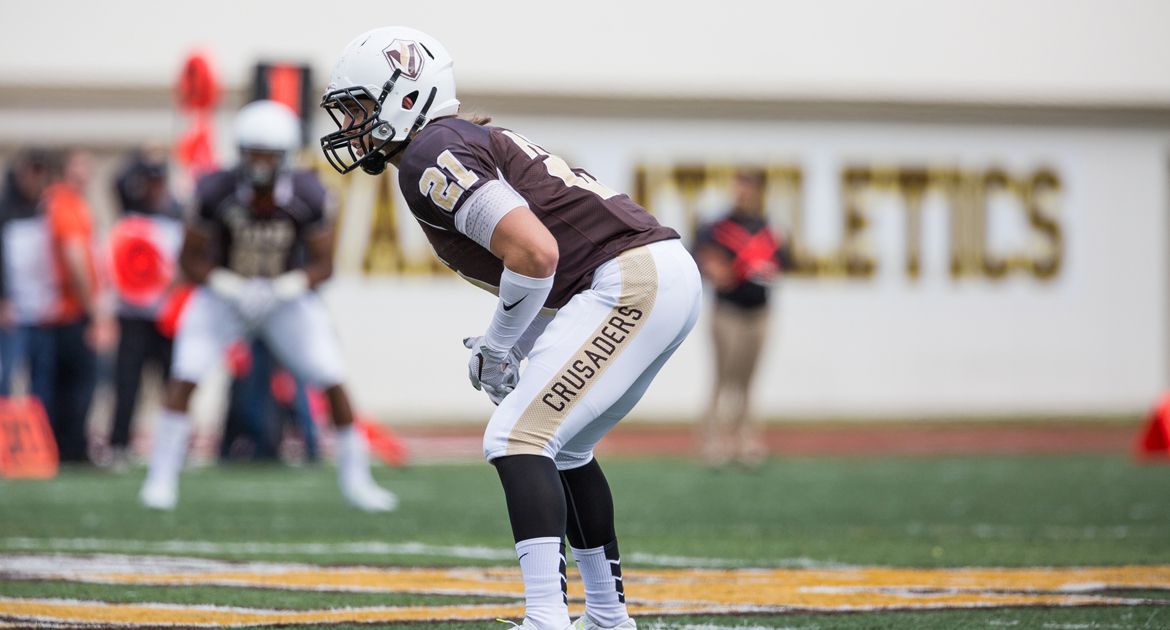 Valpo and San Diego were engaged in a 10-3 game at halftime, but the Toreros racked up 127 second-half rushing yards as they cruised to a 38-6 win over the Brown and Gold at Brown Field on Saturday.

Kellan Hughes (Cicero, Ind./Hamilton Heights) had an active day in the Valpo secondary. The sophomore picked off two Anthony Lawrence pass attempts in the first half. Hughes and senior Alex Green (Zionsville, Ind./Zionsville Community) spearheaded the defensive unit for the Crusaders as it held San Diego to 173 total yards on 39 plays.

Jacob Newman (Lawrenceburg, Ind./Lawrenceburg) gave Valpo a first-quarter lead when he connected on a 38-yard field goal at the tail-end of an 8-play drive that consumed just under four minutes.

The Toreros eventually erased their zero on the scoreboard following an eternal second-quarter drive.

Valpo forced four third downs on the 14-play, eight-and-a-half minute series, but each time San Diego moved the chains. Wide receiver Brian Riley finished it off with a 15-yard touchdown pass from Lawrence.

San Diego's Jack Flatau tacked on a 28-yarder with 18 seconds left in the half to move the visitor's lead to 10-3. The Toreros controlled the ball for 18:02 of the first half.

Lawrence tossed two touchdowns in the third quarter while San Diego pulled away from the Brown and Gold. Lawrence and Riley hooked up again with a 24-yard pitch-and-catch for the pair's second score of the day.

Lawrence finished the day 21-for-28 for 214 yards and four touchdowns. Jereke Armstrong led the USD running attack with 84 yards on 13 carries, including a rushing TD.

Newman registered his second field goal of the game in the final minute of the game to push it to 38-6. Jean Rene (Delray Beach, Fla./Wellington Community) snagged a 43-yard completion on the 64-drive, Valpo's longest of the day. Rene paced the Crusader receiving corps with 72 yards. Fellow freshman Ryan Dugan (Weston, Fla./Cypress Bay) pitched in 39 yards on three catches.