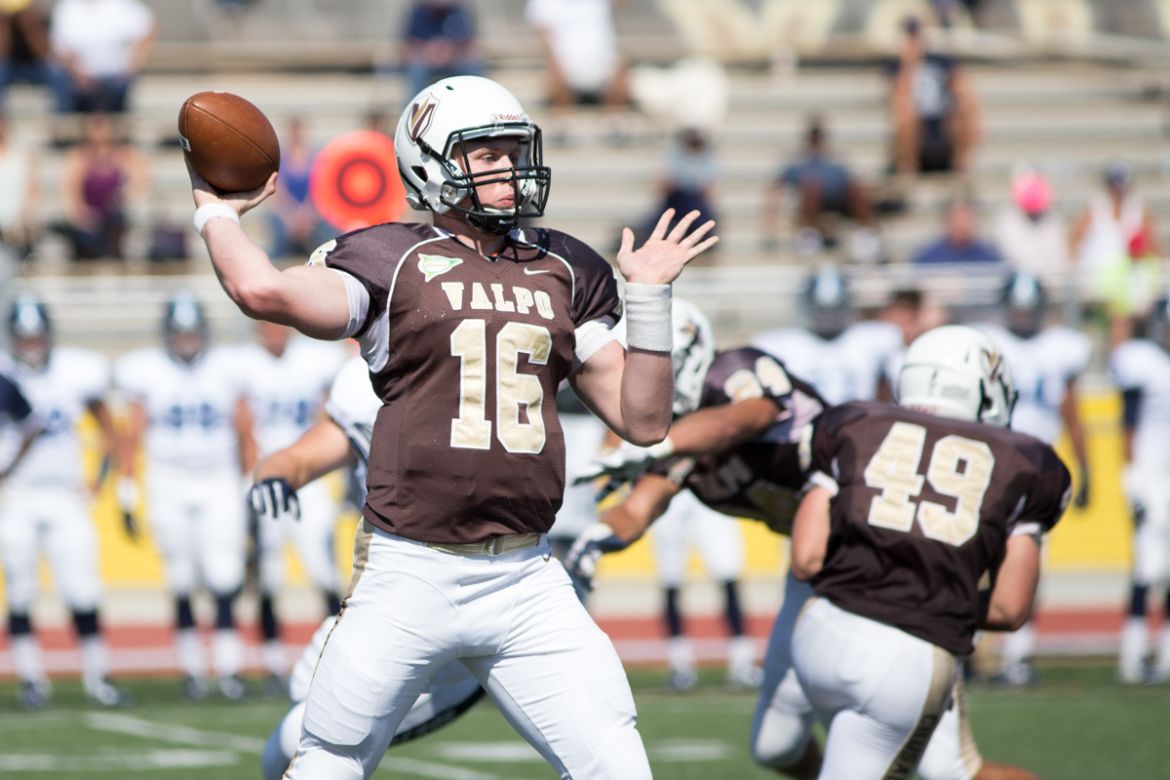 Sophomore quarterback Ryan Clarke (Hopatcong, N.J./Hopatcong) carved his name into the school's record book with five touchdown passes as he led the Crusaders to a 42-35 win over Davidson at Richardson Stadium in North Carolina.

A relatively calm first half morphed into a scoring frenzy over the game's final 18 minutes.

Davidson led 14-7 at the break thanks to a 37-yard touchdown catch from William Morris. The score gave the Wildcats their first lead of the day.

Clarke and Ryan Shea (Wesley Chapel, Fla./Wiregrass Ranch) had put Valpo ahead, 7-0, two-and-a-half minutes into the tilt following a 12-yard strike. The touchdown catch was Shea's first of 2015.

The Crusaders needed just a little more than five minutes of second-half time to erase the seven-point deficit.

Catrine was on the receiving end of a 22-yard heave from Clarke to cap a six-play, 35-yard drive. Jacob Newman (Lawrenceburg, Ind./Lawrenceburg)'s point after knotted it at 14-14 with 9:23 remaining in the third quarter.

The Crusader defense forced a three-and-out on the impending Wildcat possession to put a winded Davidson defense right back on the field. Though Valpo did not break through on its next drive, the Brown and Gold gained crucial field position.

After another rapid three-and-out, Davidson punted from its own end zone into a swirling wind. Freshman Legend Choudhry (Houston, Tex./Goose Creek Memorial) fielded John Cook's punt near midfield and returned it 17 yards to the Davidson 29-yard line.

Clarke and the Valpo offense wasted no time seizing its second lead. On the second play of the drive, Jean Rene (Delray Beach, Fla./Wellington Community) trotted into the end zone after a 26-yard toss from Clarke.

The two teams traded touchdowns to close the third quarter. Clarke and Catrine hooked up again, this time for a 50-yard score to push the Crusaders ahead 28-21 with 1:04 left in the third stanza.

Davidson quarterback Taylor Mitchell threw two of his three touchdown passes in a span of 1:16 during the fourth quarter to reclaim a one-score lead. Morris made a dazzling catch at the back pylon to give the home team a 35-28 lead with 7:16 left in regulation.

As quickly as the momentum swayed the way of Davidson, it returned to the visitor's side just as swiftly when Morgan, the nation's leader in kickoff return yards in 2014, ran Trevor Smith's kickoff 89 yards for a game-tying touchdown.

Valpo's defense made its biggest stand of the afternoon following Morgan's spurt.

The Wildcats traversed no farther than their 36-yard line. The problems compounded for Davidson when Cook's punt went off the side of his foot and the ball tumbled awkwardly to the 50.

Facing a short field, Clarke polished off the go-ahead drive with his fifth touchdown of the day, a 12-yarder to freshman Griffin Norberg (Sunrise, Fla./Western). Norberg secured the ball in the flat and raced down the visitor's sideline for his first career touchdown reception.

Clarke completed 18 of his 32 pass attempts for 244 yards. His five touchdown passes were the most by a Crusader quarterback since David Macchi accomplished the same feat in 2003. Valpo has never had a QB throw for more than five in a game.

The Brown and Gold had struggled mightily on third down in their first three contests. However, the Crusaders were 8-of-17 on such occasions Saturday.

Valpo (1-3, 1-1 PFL) will travel to Des Moines, Iowa next Saturday to take on the Drake Bulldogs (2-3, 1-1 PFL). A win would signify the Crusaders' first at Drake Stadium in program history. Links to the audio, video, and live stats will be available at ValpoAthletics.com.