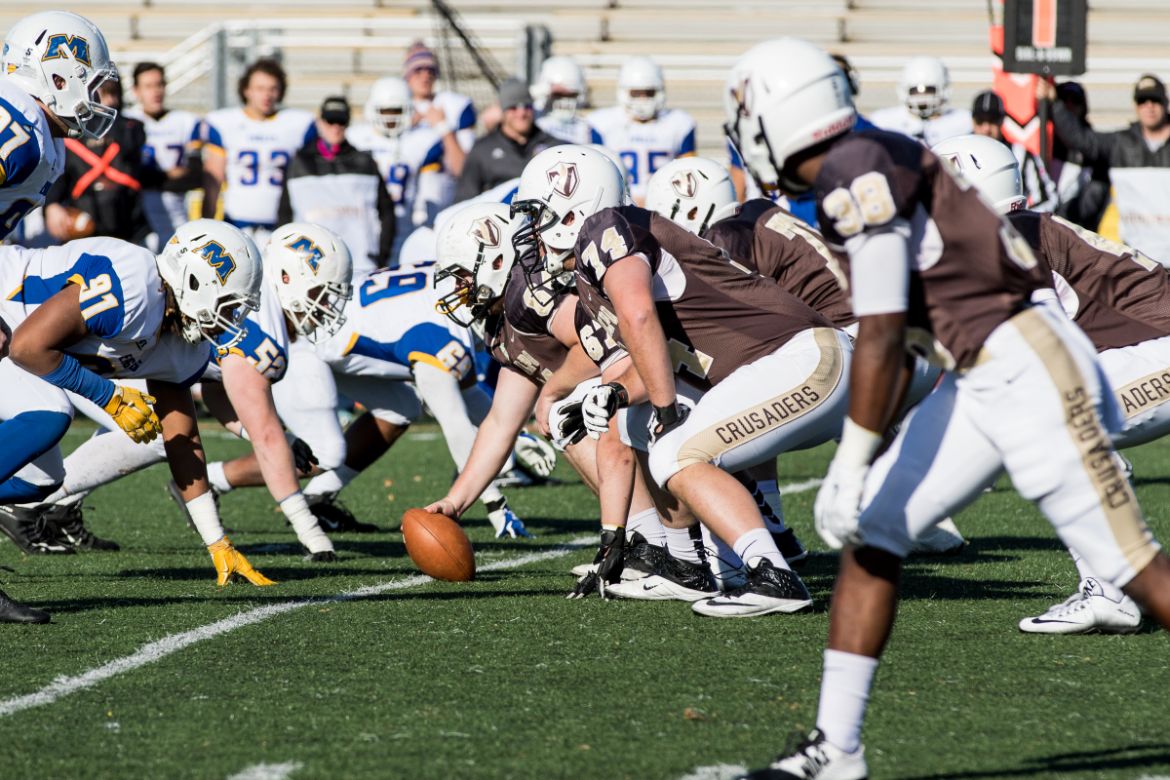 Jarrett Morgan (Cooper City, Fla./Cooper City)'s rushing touchdown in the fourth quarter erased a Morehead State lead that had reached 14 points at one juncture, but Eagles quarterback Austin Gahafer and wide receiver Jake Raymond teamed up for a late score as Valpo fell 36-29 at Brown Field on Saturday.

"I was incredibly pleased with our seniors today. They all played and nearly all of them had an impact in today's game. With that said, it's difficult to win games turning the ball over five times," head coach Dave Cecchini said.

The senior stripped Tanner Napier following a four-yard completion inside Morehead State territory. Fellow senior Cody Cotton (Maywood, Ill./Walter Lutheran) scooped up the loose ball and raced down to the Eagles' five-yard line. The Crusaders needed just two plays to get on the board. Operating out of the wildcat formation, Morgan took the snap and tossed it over the top to a wide-open Mason Sutter (Woodstock, Ill./Woodstock). The Brown and Gold led 7-0 after a little more than five minutes.

Morehead State responded with three consecutive touchdowns to take a 21-7 lead with nine minutes to play in the second quarter.

25 seconds later, the Valpo offense was back on the field thanks to an inspiring three-and-out forced by its defensive counterparts.

Given favorable position near midfield, Staal hit freshman Griffin Norberg (Sunrise, Fla./Western) with an 11-yard pass to move into Eagles territory with just four under minutes to play in the half. Staal then connected with Jake Hutson (Blanchard, Mich./Montabella) on back-to-back plays - the latter coming on a 4th and 5 that netted the Crusaders 34 yards - to advance Valpo inside the MSU 10.

Two plays later, Hutson barreled his way into the end zone to make it a 21-17 game going into halftime.

Gahafer put Morehead State back on top by 11 points with just over a minute remaining in the third quarter when he found Jake Raymond along the near sideline for a 44-yard touchdown reception. Shavi Bash's extra point pushed it to a 28-17 game.

The Crusaders got the ball back and just when it appeared the final seconds of the third quarter were going to elapse, Staal hiked the ball and pegged Jean Rene (Delray Beach, Fla./Wellington Community) for a 41-yard strike of their own. Cecchini opted to go for two, but the Brown and Gold were unable to convert.

Morehead State took a 28-23 lead into the final quarter.

The Valpo defense stepped up yet again on MSU's next drive, forcing a Pat DiSalvio punt near midfield. DiSalvio's boot went just 31 yards, allowing the Crusaders to take over at their own 26-yard line.

Staal and the Crusaders manufactured their best - and longest - drive of the day to snag a fourth-quarter lead.

Rene and Morgan rattled off 14 and nine yard rushes, respectively, to open the possession and move the ball to midfield. Staal recorded four straight completions - all to different receivers - as the Crusaders were knocking on the door of MSU's red zone. Facing a 4th and 6, Staal fired a 24-yard laser to Ryan Shea (Wesley Chapel, Fla./Wiregrass Ranch) for a crucial first down at the 1. Morgan plowed his way in to give Valpo a 29-28 edge with 9:38 to play.

MSU failed to move the chains on its next attempt, but were granted a reprieve following a Valpo possession that lasted just three minutes.

Gahafer took full advantage, going 6-of-11 for 74 yards, on a game-winning drive that culminated in a 17-yard toss to Raymond. Gahafer went right back to the well on the two-point conversion, finding Raymond in the end zone to give MSU a 36-29 cushion.

Staal led Valpo down to Morehead State's 42-yard line on its desperation drive, but MSU cornerback Justin Grier snatched his second interception of the day to seal the win for the Eagles.

Staal finished the afternoon 32-for-53 for 337 yards. The redshirt junior set career watermarks in completions and passing yards. His passing efforts also totaled season highs from the quarterback position. Ryan Clarke (Hopatcong, N.J./Hopatcong) was 2-for-3 for 15 yards, but left in the first quarter after suffering a knee injury.

Rene recorded his first 100-yard day in a Crusader uniform. The freshman hauled in nine catches for 116 yards. Hutson snagged five catches for 82 yards while leading the rushing attack for the Brown and Gold. He amassed 45 yards and a touchdown to bring his all-purpose yard total to 127 on the day.

Bradley added an interception and three pass breakups in addition to his forced fumble to his busy stat sheet.