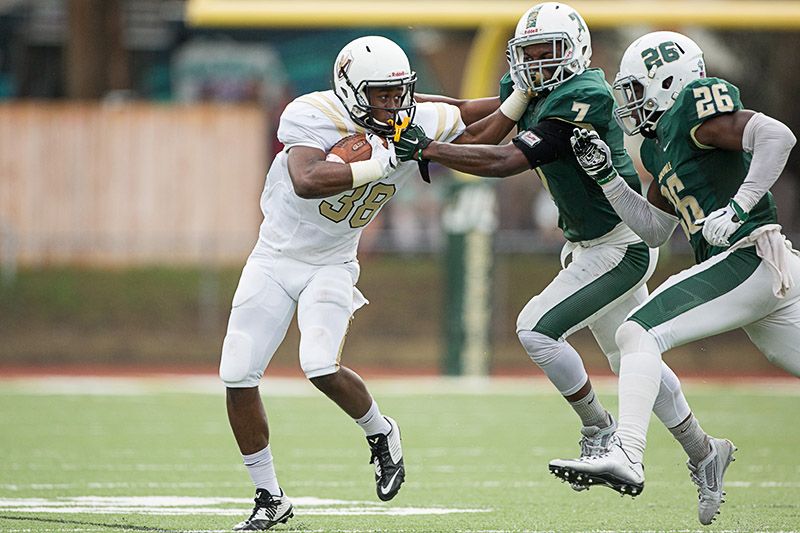 The 2015 football season came to a close Saturday with Valpo falling to Jacksonville, 58-13, at D.B. Milne Field in Florida.

The Dolphins raced ahead to a 14-0 lead before Jacob Newman (Lawrenceburg, Ind./Lawrenceburg) put the Brown and Gold on the scoreboard with a 39-yard field goal. Jacksonville responded by reeling off 17 consecutive points to extend its second-quarter lead to 31-3.

Newman again provided the Crusaders with three points following a 33-yarder with 3:40 remaining in the first half.

The Crusaders trailed 41-6 at halftime.

Valpo had a golden opportunity to burst into the end zone midway through the third stanza, but Jacksonville answered with a staunch goal-line stand. Staal completed a 13-yard pass to Jake Hutson (Blanchard, Mich./Montabella) on a 3rd and 6 to move the chains and establish a goal-to-go scenario from the JU 5. Both teams traded penalties before the Brown and Gold enjoyed a first-and-goal from the two-yard line.

Brandon Hall (Muskegon, Mich./Orchard View) was met at the line in both rushing attempts from the one-yard line, and Valpo turned the ball over on downs.

The Crusader offense atoned for its previous miscue in the latter stages of the game when Staal hit Ryan Dugan (Southfield, Mich./Eisenhower) for an 11-yard touchdown play.

Hall led the ground game with 59 rushing yards on 18 attempts. Choudhry broke loose for a 39-yard gain on his lone carry of the day, but was forced to leave the game with a leg injury.

"It's been incredibly gratifying to coach men with such character and intelligence. We're going to take what this senior class provided as a base and build upon it for the future," Cecchini said.