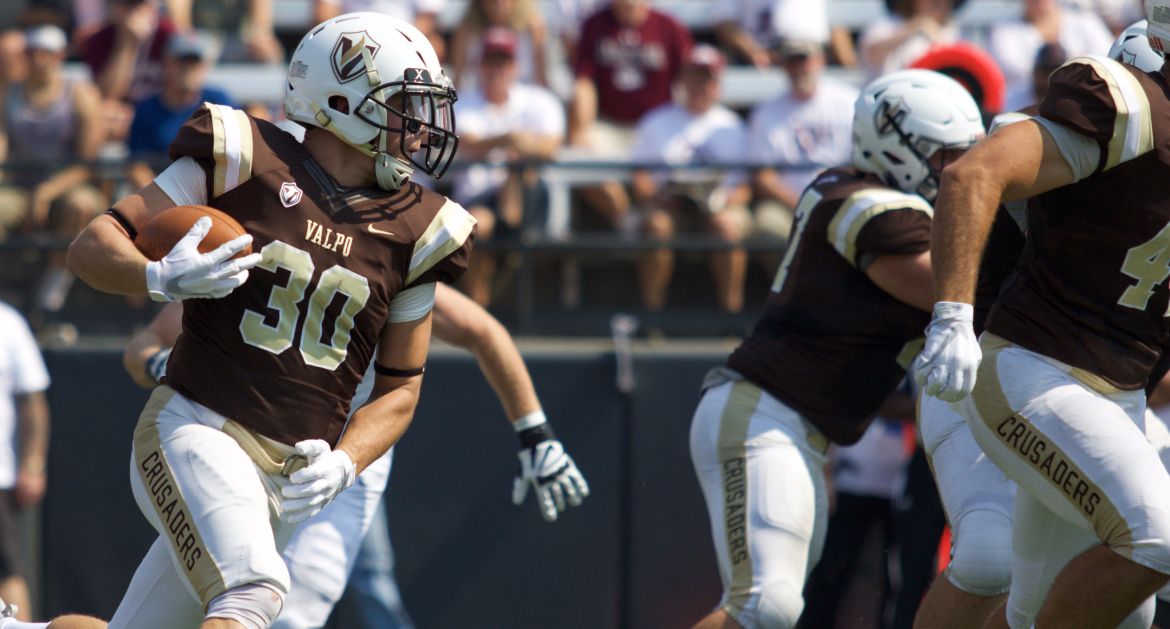 This Week in Crusader Football: The Valparaiso University football team will round out nonleague play with one final tune-up before Pioneer Football League action kicks off next week. It’s the back end of a home-and-home as the Crusaders look to repeat their success from last year’s Brown Field meeting with Trinity International. The Crusaders enter this game ranked second in the nation in passing offense at 377 yards per game.

Last Time Out: The Crusaders put together their second straight quality performance on Saturday, using a late comeback to threaten scholarship foe and Northeast Conference preseason favorite Duquesne. The Dukes held on for a 45-40 victory despite 511 yards of total offense from the Crusaders, who were led by Jimmy Seewald’s 424 passing yards, the second-best Week 2 performance in the nation by an FCS quarterback.

Following the Crusaders: For the 12th straight season, WVUR (95.1 FM, Valparaiso) is home to all 11 Crusader football games in 2017. Todd Ickow is back for his 27th season as Valpo’s play-by-play broadcaster, while Dave Huseman will add color commentary this week. Links to live audio, video and stats will be available on ValpoAthletics.com.

Head Coach Dave Cecchini: Cecchini is in his fourth season as the head coach of the Crusaders. He enters this game with a 9-26 record, both overall and in three years at Valpo. In his first season as head coach of the Crusaders, Cecchini led the program to a four-win season, its highest win total since 2007. His team matched the four win total in 2016, Cecchini’s third year. Prior to arriving at Valpo, Cecchini served as offensive coordinator/quarterbacks coach at Lehigh for four years.

Series Notes: This is the back end of a home-and-home between the two teams after the Crusaders downed Trinity International 49-24 last year at Brown Field. Jimmy Seewald made his first career start and matched the program record with five touchdown passes. The two schools also got together in 2006 at Brown Field and 2007 at Trinity International, with the Trojans winning both of those meetings.

Seewald Shines: The list of reasons to believe wins are on the horizon after the first two weeks of the season are numerous, but there’s little doubt that No. 9 is No. 1 on that list. Seewald’s 424 yards passing on Saturday against Duquesne were the most by a Valpo quarterback since Eric Hoffman passed for a school-record 495 on Sept. 14, 2013 against William Jewell and the most against a Division I opponent since David Macchi’s 452 against Jacksonville in 2003. Seewald finished with career highs in completions (26) and passing yards (424) while coming one TD toss shy of matching the program record that he previously matched a season ago against the Trojans. Seewald, who ranks seventh nationally with 601 passing yards in two games, completed an 80-yard touchdown pass to Parker Fox, the longest pass completion for the Crusaders since an 86-yard Eric Hoffman to Tony Taibi play in 2013. Only five passes have gone for 80 yards or more in the FCS nation this season. Seewald received an honorable mention for STATS FCS Offensive Player of the Week. He became the first PFL quarterback to throw for 400+ yards in a game this season and he and San Diego’s Anthony Lawrence are the only active PFL QBs with a 400-yard passing game in their careers. Seewald’s 424 passing yards against Duquesne were also the third-most by any FCS quarterback in the nation in a single game this season.

Offensive Outbursts: The Crusaders have surpassed 450 yards of offense in back-to-back games, the first time they’ve done that since 2013 against William Jewell and Campbell. Valpo ranks first in the PFL and 15th nationally in total offense, averaging 480.5 yards per game. They’ve done it against a Montana team that led the Big Sky in total defense last year and a Duquesne squad that ranked 10th nationally and led the Northeast Conference in total defense in 2016. The 511 yards of total offense against Duquesne was Valpo’s most since Sept. 17 of last season against Trinity International (527) and the most against a Division I opponent since Sept. 27, 2014 at Campbell (533).

To provide context for this season’s successful start, here’s a look at where the Crusaders stand in terms of total offense and passing offense through two weeks compared to where they were in those categories at this time in years past, going back to Valpo’s most recent PFL championship in 2003.

Keeping It Close: Valpo, a member of the non-scholarship Pioneer Football League, did something with little precedent in the program’s recent past each of the last two weeks, giving scholarship programs a scare. Comparing the result of this season’s first two games to previous contests against Division-I scholarship schools helps illustrate the program’s progress.

LG Eric Rentschler – Appeared in every game last season, but in his first year as a starter

CB Dilan Scargle – Made an interception in his first collegiate start

SS J.J. Nunes – Valpo’s leading tackler with 19, also has one forced fumble and one interception

OLB Austin Petrie – Converted from running back to linebacker this season

DT Jake Trumpower – Has started both games so far this season

P Alex Ng – Had his first career rush on Saturday, a gain of four for a first down on a fake punt

K Dimitrios Latsonas – In Week 1, was first Valpo kicker with three FGs in a game since ’08

Scouting Trinity International: The Trojans are under the direction of eighth-year head coach Kirk Wherritt, who holds a 23-51 record through seven seasons. The Trojans went 4-7 a year ago including a 1-4 conference record. This marks Valpo’s lone NAIA opponent on the schedule this season. One player to watch is running back Isaac Branch, who is back for his junior year after finding success in last year’s meeting with the Crusaders to the tune of 181 yards on 26 carries. Branch is averaging 40.5 yards per game in the early going this season, while Chris Wolcott is the team’s leading rusher with 61.5 yards per game. Senior quarterback Danny Mattero is 19-for-39 for 292 yards in two games.

On the Uptick: The 2016 season marked a significant improvement for the Crusaders, who finished with their highest Pioneer Football League win total since 2003 and equaled their highest overall win total since 2007. The 2016 season concluded in style, as Valpo knocked off Jacksonville 42-39, a team the Crusaders lost to by 45 points the year prior.

Looking Ahead: After this week, Valpo kicks off PFL play on Saturday, Sept. 23 at Drake, then returns to Brown Field for a Sept. 30 showdown with Stetson.