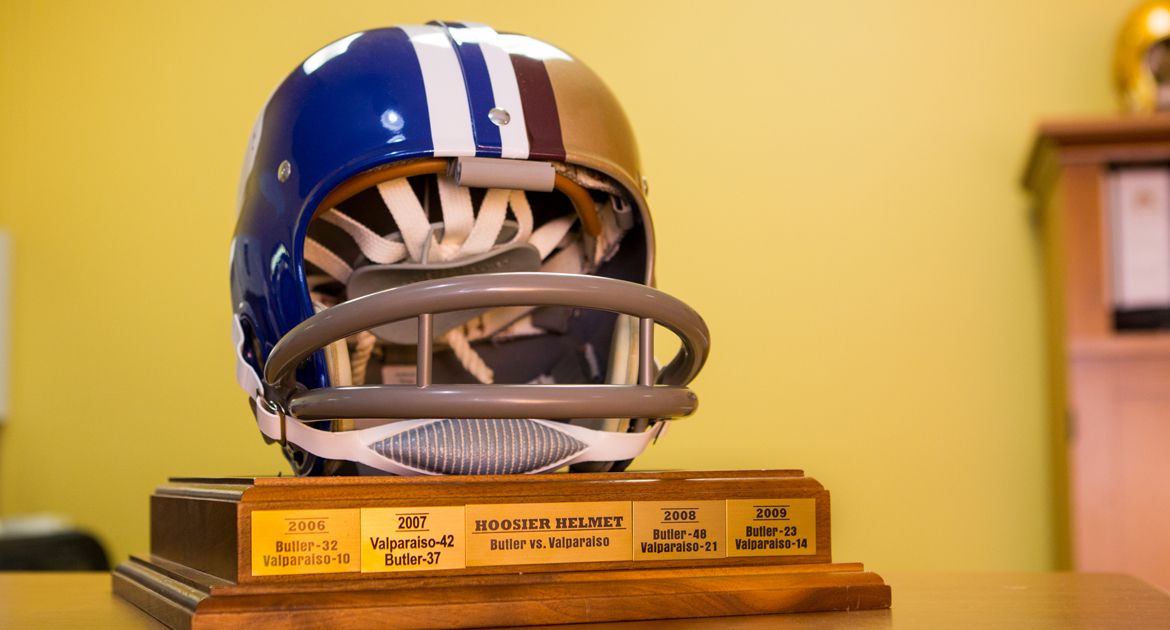 The Hoosier Helmet is back up for grabs on Saturday at Butler.
Valparaiso at Butler | November 11, 2017
Related Links
Related Links

This Week in Crusader Football: For the Valparaiso University football team, every game is important. But there’s one game each year where the stakes are higher than any other. The Hoosier Helmet and the bragging rights that go along with it will be on the line on Saturday as the Crusaders head to Indianapolis to meet their instate rivals, the Butler Bulldogs.

Last Time Out: The Crusaders held a potent offense to 17 points and accumulated 405 yards of total offense last week in Jacksonville, but the Dolphins prevailed 20-17 behind four takeaways, two of which stymied Valpo drives that had reached the red zone. Kyle Cartales led the Crusaders in both rushing yards (63) and receiving yards (67), while Nick Turner had 10 tackles. A pair of Floridians scored for the Crusaders as Jarrett Morgan had a touchdown run and freshman receiver Deuce Larose hauled in his first career TD on just the second reception of his collegiate tenure.

Following the Crusaders: For the 12th straight season, WVUR (95.1 FM, Valparaiso) is home to all 11 Crusader football games in 2017. Todd Ickow is back for his 27th season as Valpo’s play-by-play broadcaster, while Dave Huseman will provide color commentary this week. Links to live audio, video and stats will be available on ValpoAthletics.com.

Head Coach Dave Cecchini: Cecchini is in his fourth season as the head coach of the Crusaders. He enters this game with a 13-29 record, both overall and in three years at Valpo. In his first season as head coach of the Crusaders, Cecchini led the program to a four-win season, its highest win total since 2007. His team matched the four win total in 2016, Cecchini’s third year. Prior to arriving at Valpo, Cecchini served as offensive coordinator/quarterbacks coach at Lehigh for four years.

Series Notes: Where do you begin? Valpo and Butler have matched up 75 times on the gridiron over the years, a rivalry that dates all the way back to 1927. The Crusaders are 25-50 all-time against the Bulldogs, who have won eight of the last nine meetings. Valpo’s only win in that span was a 17-3 victory on Nov. 8, 2014 at Brown Field. A year ago, the Bulldogs got the better of the Crusaders 23-12, while Valpo dropped its most recent trip to the Butler Bowl 41-21 in 2015. Valpo has lost five straight at Butler dating back to a 34-21 win in 2005. The two teams have faced off every year since 1951.

Scouting Butler: Butler head coach Jeff Voris is in his 12th season in charge of the program. Butler was picked to finish seventh in the PFL this year after bringing back both its leading rusher (Duvante Lane) and leading receiver (Pace Temple) from a year ago. They were hit with the loss of quarterback Malcolm Weaver. Lane is again atop the team in rushing with 516 yards and six scores, while Sam Schrader has rushed for 359 yards and nine TDs. Temple paces the team with 49 catches for 873 yards and four scores and leads the league in receiving yards per game at 95.1. Will Marty has passed for 1,848 yards and seven TDs by going 167-of-279 through the air. Butler can nail down its first winning season in PFL play since 2013 with a victory on Saturday. The Bulldogs managed just two PFL wins a year ago, with Davidson and Valpo on the losing end of those games.  Butler ranks third in the PFL in total defense (354.2 yards/G) and seventh in total offense (355.9). The Bulldogs have been particularly strong in stopping the run as they rank second in the league with just 114.3 rushing yards allowed per game. Butler’s pass defense, however, ranks eighth in the league at 239.9. That pass defense could have its hands full as Valpo’s pass offense is first in the league at 277.2. Butler’s leading tackler is Isaak Newhouse, who is third in the league at 9.3 per game. Kicker Drew Bevelhimer has the most made field goals in the league with 14, but has also missed five attempts.

Offense Output: Valpo’s offense has racked up 3,827 total yards this season, placing it on the verge of moving into the Top 5 most productive offensive seasons in program history. The Crusaders will move past the 1996 season, which currently ranks fifth, with 138 yards of offense or more on Saturday. A 375-yard output would also allow 2017 to leapfrog 2007 and move into fourth in program history for total offense. Valpo needs four more touchdowns to move into the Top 5 for team TDs in a season in that category. The Crusaders have scored 286 points this year. The next time they score, they’ll move into the Top 5 in program history for most points scored by the team in a single season. In addition, the team’s next points will make this the highest single-season point total for Valpo since 2003. If the Crusaders score 14 points or more on Saturday at Butler, they will reach 300 points in a single season for the fourth time in program history and just the second time since 1951.

Seewald Keeps Climbing: Quarterback Jimmy Seewald surpassed 2,000 passing yards for the season last week in Jacksonville. The Valpo sophomore is 149-of-247 for 2,198 yards and 15 touchdowns this season. He moved up another notch on Valpo’s career list with his performance on Saturday, throwing for 296 yards against the Dolphins to leapfrog Gordon Helms (1953-1955) for eighth in program history. In addition, Seewald has cracked the Top 5 in program history in touchdown passes in a single season at 15. He has bumped Ben Lehman (2014) and Nick Browder (1994, 1995) out of the Top 5. Seewald is on the verge of moving into the Top 5 for single-season passing yards as well – he needs 105 more yards to outdo Eric Hoffman’s 2012 season (2,302).

Happy Homecoming: Valpo freshman Deuce Larose made the most of his return to his home state of Florida last week, hauling in his first career touchdown on a 22-yard pass from Jimmy Seewald. Larose’s reception was just the second of his Crusader career and allowed him to become the ninth different Crusader with a receiving TD this season. Both Valpo touchdowns were scored by Floridians on Saturday, as Jarrett Morgan rushed for the other.

Tacking It On: Dimitrios Latsonas has made 32 PATs this season, which ranks third in program history for extra points in a single year. He needs three more successful point after attempts to break the current record of 34, which is shared by Andrew McCawley (2004) and Eric Strasser (1999).

Passing Progression: With two weeks to go, Valpo has the top passing offense in the Pioneer Football League at 277.2 passing yards per game. Morehead State ranks second at 273.0, followed closely by San Diego’s 268.8. The Crusaders have a chance to lead the league in passing yards for the first time since 2003. Last season, they were eight of 11 at 199.2 and they have ranked better than sixth in the PFL just once in the last 12 years.

Navarro Keeps Catching Passes: Freshman Donny Navarro has continued to impress week in and week out, as he leads the team with 28 catches for 455 yards and four touchdowns. Navarro leads all PFL freshman with 16.6 yards per catch and is one of three players tied for the league lead in TD catches among freshman with four. Navarro ranks second in the league behind Stetson’s Justin Jordan in receiving yards per game by a freshman at 49.7 – only 0.4 yard per game behind the leader. Navarro is 45 yards away from becoming the first Crusader to hit 500 receiving yards in a season since 2014. If he passes 500 yards, he’ll become just the fourth Crusader in the last 10 years to do so, joining Tanner Kuramata, Andrew Cassara and Sean McCarty.

Making Them Count: Valpo’s Parker Fox is averaging an impressive 23 yards per catch this season on 14 receptions. The Valpo record book requires a minimum of two catches per team game to qualify for that category, so Fox would need eight catches over the final two games to make the cut. If it qualified, his 23.0 yards per catch would rank third in program history.

Morgan Making Moves: Senior Jarrett Morgan now has 1,168 career rushing yards, the third-most of any Crusader in the last decade. Brandon Hall (2013-15) finished at 1,427, while Jake Hutson (2012-15) racked up 1,577. Morgan has rushed for three touchdowns in the last two weeks after rushing for one in the first seven games of the season.

Tackling Tandem: Drew Snouffer and Nick Turner have comprised a one-two punch for the Crusaders at the linebacker position over the course of the season. They remain the team’s top two tacklers, with Snouffer at 85 and Turner at 78. Turner is tied for sixth in the league, while Snouffer ranks second in the PFL. Turner led the team on Saturday at Jacksonville with 10 tackles, posting his third double-figure tackle game of the season. The Crusaders haven’t had two players finish with 90+ tackles in the same season since 2013.