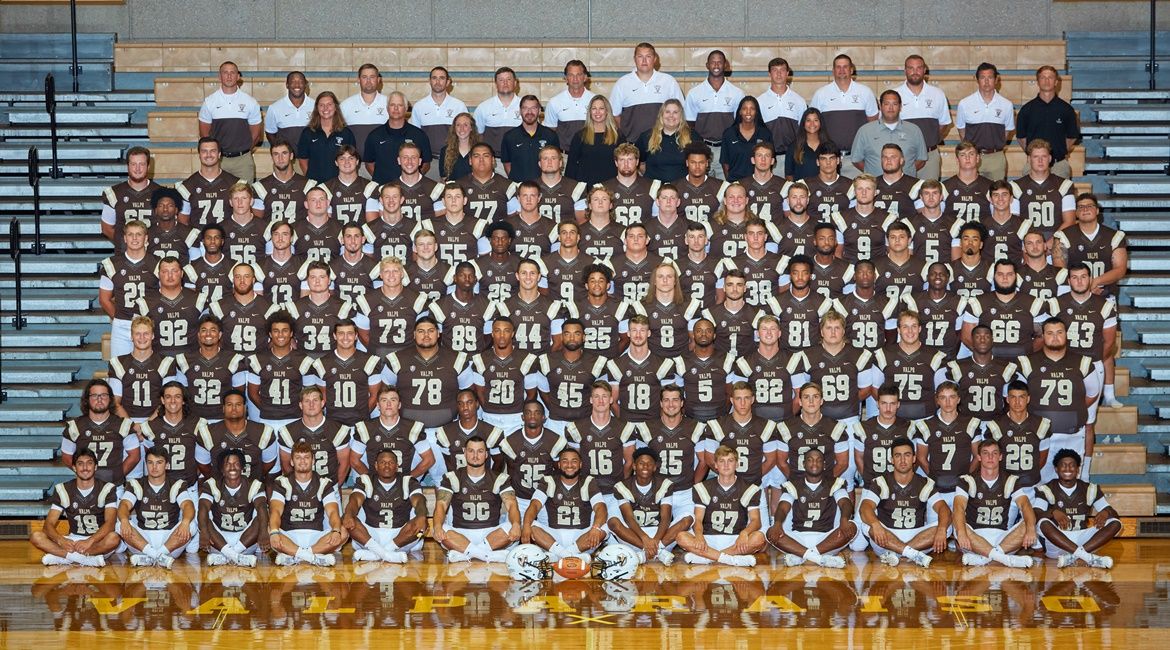 It’s the dawn of a new era for the Valparaiso University football program as the first regular season game under head coach Landon Fox is set for Thursday, Aug. 29 at Eastern Kentucky.

It’s a special season in more ways than one as the University celebrates 100 years of Valpo football, while the program ushers in a new era with Fox taking the helm.

The most asked about position on the football field featured a competitive camp for the starting role. Redshirt juniors Jimmy Seewald (Livonia, Mich. / Divine Child) and Chris Duncan (Woodland Hills, Calif. / Woodland Hill-Taft) are both still in the mix to receive the start for the season opener.

“Chris and Jimmy are different in terms of what they can do,” Fox said. “Jimmy is a passer with great command of the offense. Chris’s command has gotten tremendously better, and he can also do a lot with his legs. The most important thing we ask those guys to do is take care of the football and throw it on time. We’ve seen positive steps with both of them being able to do that on a regular basis throughout fall camp.”

Perhaps Valpo’s deepest position, the running back group features a strong corps of returnees. Senior Kyle Cartales (Loxahatchee, Fla./Cardinal Newman) appeared in all 22 games over his first two seasons before having his junior year cut short after six games due to an injury. Redshirt freshman Riley Allison (Fort Lauderdale, Fla./St. Thomas Aquinas) is also high on the depth chart after a breakout spring and fall.

“Kyle is a player with all-league ability,” Fox said. “It’s great that he’s going to be pushed by Riley, who has really come on during camp. Elias had a good camp all the way around, from a leadership standpoint and on the field. Cody and Doug have the ability to help the team in multiple ways as they can line up at running back or H back. They can also do some blocking for us and provide a different dynamic. They are both physical, tough football players.”

“Ollie and Kenny have shown flashes of their ability to make big plays,” Fox said. “Both are sophomores who are still learning to be consistent. They have the ability to be very good players. You know exactly what you’re going to get from JD, and that’s what we like as coaches. He’s very consistent. Deuce had a strong camp and we look for him to make plays for us this year. He has some experience, so we need to lean on that. Jacob is a freshman who has picked things up quickly. He has the physical tools to be a very good player as he continues to learn and develop.”

“We ask the tight ends to do a lot in terms of being able to block while also running routes and having an involvement in the passing game,” Fox said. “Both Kluck and Bittner have shown an ability to be physical at the line of scrimmage and the point of attack. Conlin has come in and picked up the offense. He plays extremely hard and is continuing to develop and learn.”

“Our offensive linemen have taken a ton of snaps in practice because we don’t have a large number of players at that position,” Fox said. “They’ve improved their mental toughness. Their ability to take a lot of reps to help our football team was outstanding. They’ve hung in there well throughout fall camp.”

“We have the ability to rush the passer,” Fox said. “Trejuan and Austin have learned the defense quickly and they play extremely hard. Gavin plays hard and can come off the edge. Nathan does what we ask him to do and is always in the right spots.”

At defensive tackle, James Reed (De Soto, Mo. / Saint Pius X) will be relied upon to have a big season. Drew Gedrys (McDonald, Penn. / South Fayette) is the other projected starter at that position, while Cameron Germain (West Palm Beach, Fla. / Dwyer) has moved from defensive end to defensive tackle. Nasa Sete (Mishawaka, Ind. / Mishawka Marian) will be relied upon to provide depth at that position.

“James has the ability to be an all-conference type player,” Fox said. “He’s disruptive inside and is very active. He’s hard to block. Drew is a solid defensive tackle and is strong to the point of attack. He’s a very dependable player. Cam may play a bit of end and tackle, but it’s a good move for our team to have him at tackle with his length and size. We’re excited about his development in fall camp. Nasa had experience last year and can be good at the point of attack.”

“Nick has the ability to be a very good player in the Pioneer Football League,” Fox said. “He understands defense very well and is physical. Matthew is a very consistent and smart football player who will provide depth at middle backer.”

At the weakside linebacker (Will) position, sophomore Jaxon Peifer (Normal, Ill. / Normal Community) and senior Austin Petrie (Livonia, Mich. / Stevenson) are in a close battle for the starting job and both figure to play key roles on Valpo’s defense. Freshman Evan Annis (Hilliard, Ohio / Hilliard Davidson) is also in the mix at that position.

“Jaxon has really come on strong and is very consistent,” Fox said. “He does his job and is a smart player. He’ll continue to be pushed by Austin, who has made a lot of big plays for our football team in the past and we look forward to seeing him continue to do that this year. We’ll put him in position to make those plays. Evan had a good camp and will provide depth to the linebacker group.”

At the nickel back (Sam) spot, Laddie Skarecky (Naperville, Ill. / Naperville Central) had an outstanding camp. He owns the starting job and will be backed up by sophomore Trey Psota (Bay Village, Ohio / Bay).

“Laddie is an old-school, hard-nosed, physical player,” Fox said. “He brings it every day and is a competitor, and that’s what you like about him as a coach. He’s skilled enough to play in space and in the box. We moved Trey from the weak backer position to the nickel position in the spring because that spot fit his athleticism.”

“Jamari is going to be a leader in our communication in the secondary,” Fox said. “He will be important in our communication calls and getting us in the right alignments and right coverage. Michael is a very smart football player, and Kellan is a physical, aggressive safety. Both had good camps.”

At corner, fifth-year senior Jalin LeAndre (West Park, Fla. / Hallandale) is the team’s most seasoned player with the most experience. He is excited to be back in action after being limited to four games due to an injury last season. Henry Hebda (Brighton, Mich. / Gabriel Richard) is the other projected starter at the corner back spot, while Kolton Sherman (Millington, Mich. / Millington), Cam Kelley (Stamford, Conn. / The Brunswick School) and Stacey Jones (Wadsworth, Ill. / Warren Township) are all in the mix.

“Jalin is good at understanding the big picture, while a lot of cornerbacks are often out on an island,” Fox said. “Henry is a worker and a high-effort guy. Kolton is a very intelligent football player who is never too high or too low.”

“We’re excited about Dimitrios, who has the ability to go out there and kick 50+ yard field goals,” Fox said. “We saw some of those in fall camp. That’s a weapon when you get in the red zone and have a chance to come away with points. Carter is a very consistent player in everything he does. We like his straight-lined demeanor. Benjamin has been a big plus for our football team after we didn’t have a punter on the roster during the spring. He has been a huge asset.”