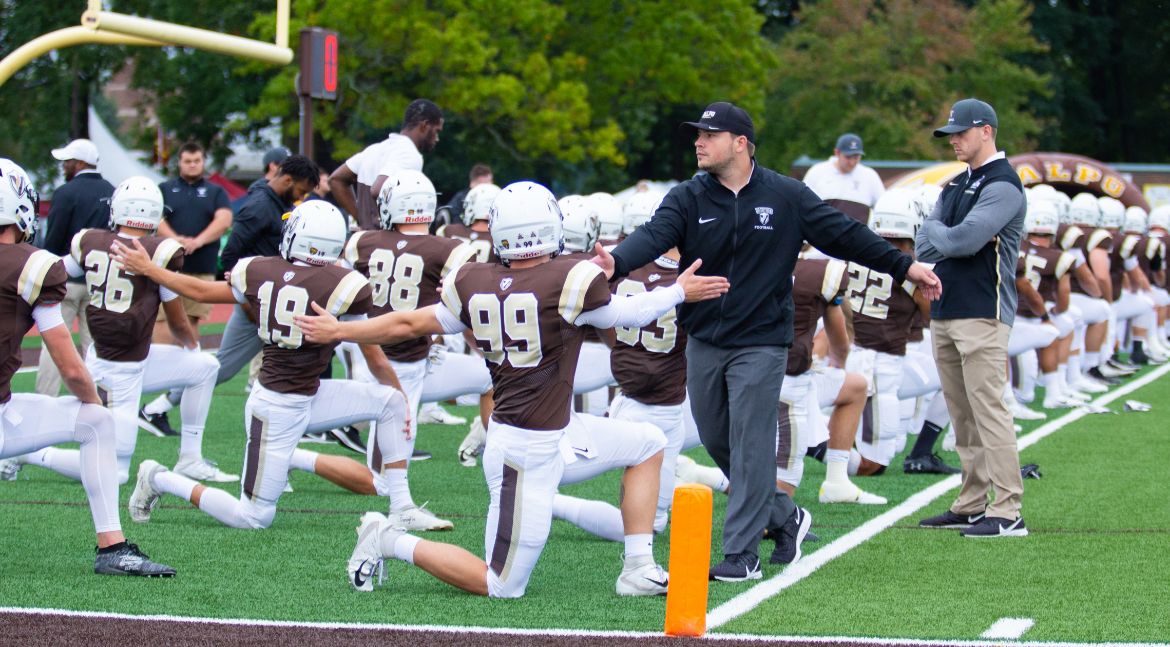 This Week in Valpo Football: The Valparaiso University football team will board a plane for the first time this season in advance of Saturday’s game as the team makes its way to America’s Finest City to renew a Pioneer Football League matchup with defending league champion and perennial favorite San Diego. Valpo will close out a stretch of playing the league’s top three teams based on the preseason poll in the first three weeks of PFL play.

Previously: Valpo enjoyed its most productive offensive day of the year in Saturday’s 41-28 loss to Dayton, accumulating 447 yards of offense including 299 on the ground. Quarterback Chris Duncan led the way with 148 yards passing and 154 rushing, while Ollie Reese provided a 95-yard kickoff return touchdown. Valpo was down by just seven with the ball in the third quarter, but a drive stalled out at midfield. The team went 1-of-5 on fourth down.

Dual Threat Quarterback: Chris Duncan rushed for 154 yards on Oct. 12 vs. Dayton, becoming the first Valpo player to exceed 150 rushing yards in a game in seven years. The last Valpo player to do so was Jake Hutson on Nov. 3, 2012, when he went for 248 yards in a game at Campbell. Duncan was the first Valpo player to rush for 150 yards in a game at Brown Field since 2008, when Ross Wiemer went for 170 against Davidson. Duncan had the most rushing yards by a Valpo quarterback in a single game since Sept. 1, 2007, when Warren Arnold had 172 against Saint Francis. Duncan had the second-highest single-game rushing total of any PFL player this season to date, behind only Jacksonville’s Calvin Turner (169 on Oct. 5 at Dayton). His single-game yards per rush average of 11.0 was the best in the PFL this year.

Ground Game: As a team, Valpo totaled 299 yards on the ground on Oct. 12 vs. Dayton after entering the game with 72 marking the team’s season high. It was Valpo’s top team rushing performance since the aforementioned Nov. 3, 2012 game at Campbell, when the team totaled 304 yards against the Fighting Camels. The game against the Flyers marked Valpo’s second-best rushing performance since the start of the 2009 season and best in a home game since accumulating 351 yards on Oct. 11, 2008 vs. Davidson. In addition, the 447 yards of total offense against Dayton was a season best.

The Reese Return: Among the highlights of Valpo’s 28-point output on Oct. 12 against Dayton was a 95-yard kickoff return for a touchdown by Ollie Reese, the first of his career and the first by a Valpo player this season. He turned in the second-longest kickoff return in the PFL this season behind Dayton’s Jake Chisholm, who had a 97 yarder on Sept. 21 vs. Duquesne. Through Oct. 13, Reese is one of just 15 players in the FCS nation with a kickoff return of 95 yards or longer this season. Reese is ranked 20th nationally and leads the PFL with 810 all-purpose yards.

Latsonas on Verge of Record: Valpo kicker Dimitrios Latsonas tied the program record for career made PATs by going 4-for-4 last week at Dayton. The Valpo kicker is currently even with Andrew McCawley (2003-2005) with 83 made extra points in his career, needing one more to take over sole ownership of the program record.

Latsonas, Turner Among Nation’s Active Leaders: Fifth-year senior Nick Turner is up to 219 career tackles, making him the program’s active leader. In addition, Turner has moved into a tie for the active lead in career tackles among all PFL players with Butler’s Luke Sennett. The PFL pair is tied for 33rd nationally among active tackle leaders in Division-I FCS. Valpo kicker Dimitrios Latsonas is 23rd nationally among active FCS players in career extra points with 83 and 22nd in made field goals with 24. He’s third on the active career PFL list in both categories behind Butler’s Drew Bevelhimer and Stetson’s Jonny Messina.

Following Valpo Football: This week’s game will be broadcast on the West Coast Conference Digital Network courtesy of San Diego Athletics. The WCC Network is available free of charge. Todd Ickow will have the hometown call alongside Brandon Riley (filling in for Brandon Vickrey) on 95.1 FM Valparaiso WVUR. Links to live video, audio and stats will be available on ValpoAthletics.com.

Scouting San Diego: For the ninth consecutive season, San Diego was tabbed as the preseason favorite based on a survey of the league’s head coaches. Six Toreros were featured on the preseason all-conference squad – WR Michael Bandy, RB Emilio Martinez, DL Nick Friedel, LB Kama Kamaka, P Tanner Kuljian and RS Michael Armstead. Bandy is second in the PFL in receiving yards per game at 101.8 and receptions per game at 6.4. Martinez leads the team with 64.2 rushing yards per contest, while quarterback Reid Sinnett has thrown for a PFL-best 347.6 yards per game. Sinnett ranks second nationally in FCS in completion percentage, passing yards per game and passing efficiency. San Diego is coming off a 37-17 road win over Davidson that saw Sinnett throw for five touchdown passes while the Wildcat offense was shutout in the second half. San Diego enters this week riding a 31-game PFL winning streak, the longest active conference winning streak in all of Division I. The team’s last league loss came on Oct. 10, 2015 at Dayton. The Toreros are 40-1 in PFL play over their last 41 league games. San Diego has scored 30 points or more in eight straight games dating back to last year. The program has won 35 PFL home games in a row dating back to Oct. 9, 2010. The Toreros have won seven of the last eight PFL championships. They’re under the direction of seventh-year head coach Dale Lindsey.

Turner Tackle Tidbits: In the PFL opener against Drake, fifth-year senior Nick Turner became the first Valpo player with 3.5 TFL in a single game since John Guilford on Oct. 17, 2015 vs. Dayton. He equaled the most by a Valpo player since Guilford’s 4.0 on Nov. 8, 2014 vs. Butler. Turner also became just the third PFL player with 3.5 or more TFL in a game this season, joining San Diego’s Kevin Glajchen (4.0 vs. Harvard) and Morehead State’s Vaughn Taylor (3.5 vs. Union). Turner is up to 7.0 TFL for the season, tied with Davidson’s Bryce Perry-Martin for the league lead.

Centennial Season: In addition to marking the start of a new head coaching tenure, 2019 is a significant season for Valpo football as the program is set to celebrate its 100-year history over the course of the campaign. Valpo Athletics is set to recognize individuals and teams from select eras at four games this season. The program has won 11 conference championships, including six in the Indiana Collegiate Conference and two in the Pioneer Football League. It’s also the 50th anniversary of the 1969 team that won an ICC crown, an anniversary that was celebrated at the Homecoming game on Sept. 28. In addition, Valpo retired the numbers of two University legends on Saturday at Brown Field. Garry Puetz ’73 and Fuzzy Thurston ’56 (posthumous) became the first players in program history to have their numbers retired. The use of No. 80 has been discontinued in honor of Thurston, while No. 71 has been retired for Puetz. Both were All-Americans in college and went on to win Super Bowl rings in the NFL – Puetz with Washington in 1982 and Thurston with the Green Bay Packers in the first two Super Bowls, his fifth and sixth NFL Championships.