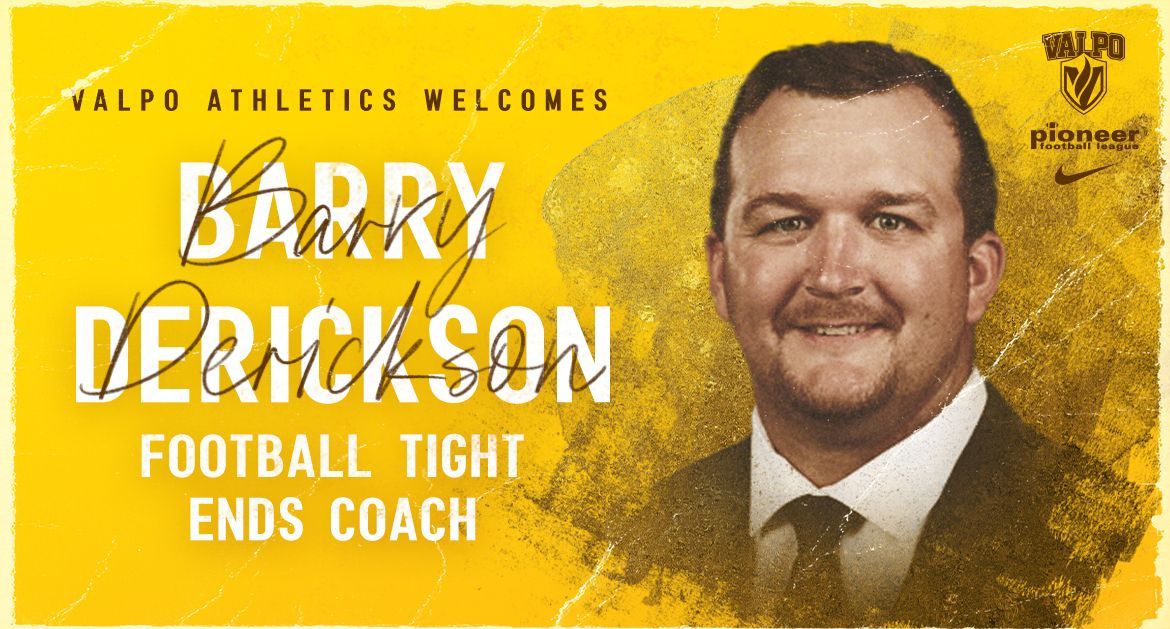 “I am excited to join the Valparaiso football program,” Derickson said. “Coach Fox is creating something special here, and I am thrilled to be a part of it. Having been a head coach and been a part of multiple programs that have turned into championship teams, I can tell you that what we’re building here is great.”

“Coach Derickson fits what we’re looking for whenever we make a hire for our coaching staff,” Fox said. “We want candidates who are intelligent and possess a desire to influence the lives of our young men. Those traits showed through during the interview process. I’m also excited about his level of experience. He’s coached at the Division-I scholarship level, been a head coach at the high-school level and played Division-III football. He has a strong understanding of our identity in the Pioneer Football League. It’s exciting to have that kind of experience join us at the tight end coaching position.”

What They’re Saying About Coach Derickson

Todd Throckmorton, Offensive Coordinator / Offensive Line Coach, Southeastern Oklahoma State University: “Coach Derickson is a great addition to the football coaching staff at Valparaiso. He is a detailed coach who builds great relationships with his players. He has experience coaching on both sides of the football and has been a head coach at the high school level. These coaching experiences have made him an excellent teacher and coach. He is a tireless recruiter who will turn over every stone looking for talent for the football program. This is a great hire as tight ends coach.”

Tommy Zagorski, Offensive Coordinator, University of Akron: “Barry is a great, hungry football coach. He’s coached on both sides of the football and has already been a head coach. His attention to detail and his players are second to none. Barry is a riser in the profession who truly loves teaching not only X’s and O’s, but utilizing football as an agent to learn about life. The entire Valpo community is lucky to have him.”

Hunter Sims, Director of Athletics, Howard Payne University: “Coach Derickson sets a high standard and expectation for his student-athletes to be great men, great students and great athletes. He has had tremendous success as a coach.”