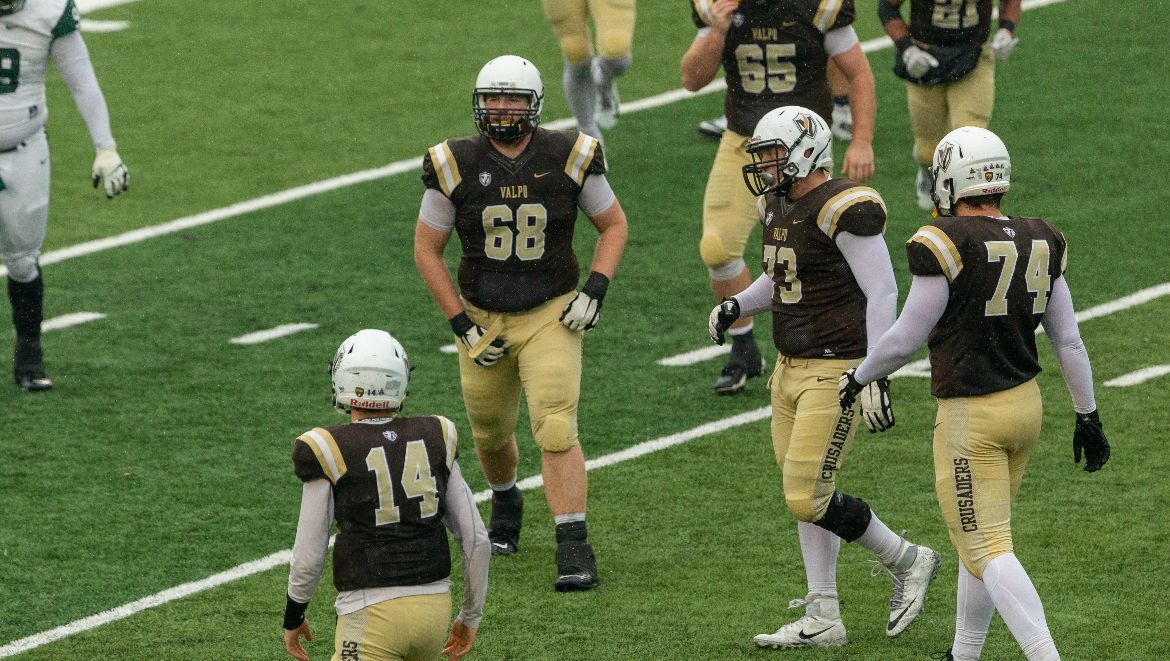 Aaron Byrd (68) has taken advantage of the unique opportunity to compete in Division-I football and study in a nationally-ranked College of Engineering at Valpo.

The launch of the bioengineering program at Valparaiso University came at just the right time for Aaron Byrd ‘22.

The redshirt sophomore on the Valpo football team and Bradley, Illinois native was weighing offers from other institutions as a high school student when he received word from a Valpo assistant coach that the University had added bioengineering to its nationally-ranked College of Engineering. The uncommon opportunity to compete in NCAA Division I Athletics and study at a nationally-ranked College of Engineering made the decision a quick one.

“My family and I came for a gameday visit, and I loved the campus and coaching staff,” Byrd said. “It was a fairly quick turnaround. About a month after the visit, I committed to Valpo.”

That decision proved to be a good one for Byrd, who is currently gaining experience in his field of choice by performing research with Craig Goehler, Ph.D., an associate professor of mechanical engineering and bioengineering. Byrd’s undergraduate research is taking place in the Human Movement Research Laboratory.

“I have a strong interest in prosthetics, but I was also curious to learn about a variety of areas within bioengineering,” Byrd said. “It’s been a great experience so far. I’m learning how to use a system where you create a GPS unit that tracks movements on a computer. This allows you to analyze different movement patterns based on past injuries, size and other factors to help us understand how different people move in different ways.”

Professor Goehler has noticed how some of the attributes that help Byrd succeed on the gridiron have carried over to the research laboratory and engineering classroom.

“An offensive line needs to present a strong front, never yielding to the pressure of an effective defense and always aware of the ball carriers in need of protection,” Professor Goehler said. “So it makes sense that Aaron, an offensive lineman for Valpo, gives off the appearance of a strong, athletic individual when you first meet him. But it is what is beneath the surface that truly sets him apart. He is quick-witted and capable of seeing the big picture, attributes that aid him in the classroom as well as on the field. I’ve come to truly appreciate Aaron’s personality and talents through his participation in undergraduate research in the Human Movement Research Laboratory. He is curious about the various techniques and pieces of equipment that can be employed to gauge an athlete’s risk of injury and eager to help quantify that risk to aid in the development of new training protocols for all college sports.”

Now in his third year in the program, Byrd has taken on leadership responsibilities on the field, especially within a young offensive line position group. But perhaps even more importantly, those responsibilities extend to an academic setting, where he mentors freshman football players in the engineering program. His helpfulness also reaches the general student body, as he serves as a tutor in the Hesse Learning Center under College of Engineering Assistant Dean for Student Success Laura Sanders.

“When a request comes in, I often ask Assistant Dean Sanders if I can work with some of our football players,” Byrd said. “That is helpful because we have built a relationship with each other as teammates, and interacting in an academic setting furthers that relationship and helps us become a closer team. In addition, students are more willing to learn from someone they know, so it helps them from an academic standpoint to work with a familiar face. I know how intimidating college can be as a freshman, so I’m happy to help.”

Football and engineering both require significant time demands, but Byrd is able to strike that balance with help from his coaches and professors.

“The professors are always there to answer questions,” Byrd said. “They make it known that they are here to help. At other schools, some professors have hundreds of students in each class. I like the smaller class sizes. It helps that the professors care about how you’re doing and about your grades. They’ve been very supportive.”

Byrd has also received support from the Valpo football staff, which created a smooth transition when head coach Landon Fox and his assistants arrived on campus prior to the 2019 season. He said Fox’s respect for his players and willingness to listen to the returning student-athletes made the adjustment an easy one.

“Aaron exemplifies what the term student-athlete is all about,” Fox said. “One quality we talk about all the time in our program is consistency, and Aaron is so consistent in his studies and in football. You have to be consistent to earn an engineering degree because the time management piece is so significant. Everybody leads in a different way, and his way of leading is giving back to his younger teammates who have the ambition to pursue engineering degrees by helping them study. He’s a perfect example of how our program is about more than just football.”

The offensive lineman saw action in all 12 games and was a starter in 2019 after making his debut with one appearance during the 2018 season. Now, he and his teammates are embracing a unique fall that is functioning more like a typical spring season with no outside competition due to the COVID-19 pandemic.

“We’re young as an offensive line group right now, so this is the perfect time to get the technical aspect down and increase our toughness and physicality,” Byrd said. “This experience is going to benefit us down the road. Our mindset hasn’t changed. We’re enjoying every practice while looking forward to the time when we take the field in a game situation again.”