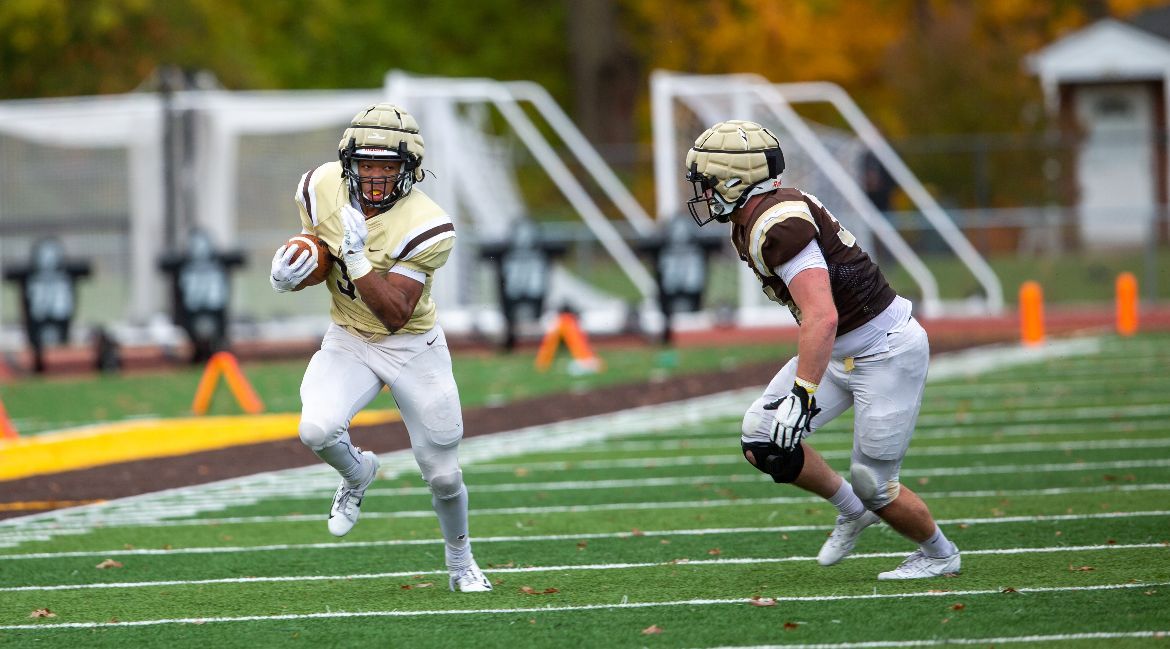 From the day he took over as the head football coach at Valparaiso University, Landon Fox’s message has been clear: His program is about more than just football.

That mantra was as important as ever this fall, when the team and coaching staff were faced with adversity after the Pioneer Football League announced that games would not take place this semester due to the COVID-19 pandemic.

Opportunities for student-athletes to develop relationships with their coaches and teammates were plentiful throughout the fall, including a team wiffle ball game, a Crusader obstacle course, an egg toss competition, coaches vs. players cornhole, the annual Crusader Classic (golf on Brown Field with tennis balls as golf balls, cones as holes and foam rollers as makeshift clubs) and a guest appearance by former NFL linebacker and Wisconsin All-American Chris Borland.

“I think I can speak for all of our players when I say we definitely appreciated it,” redshirt freshman linebacker Evan Annis (Hilliard, Ohio / Hilliard Davidson) said. “We had a lot going on in our lives, especially with many of us worried about families back home and everyone staying safe during the pandemic. Having that extra layer of support in our coaching staff meant the world to us. Fun activities outside of football to grow as a team were very important.”

Although there were no games against outside competition during this unusual year, the team still had a reason to be grateful each Saturday. Weeks of training, lifting and practices often culminated with intrasquad scrimmages that offered student-athletes the chance to compete.

“Saturday scrimmages were our versions of games this year,” redshirt sophomore linebacker Trey Psota (Bay Village, Ohio / Bay) said. “We got to fly around and hit each other, which is what we love to do as football players. We all viewed the fall as a way to get better as a team and as individuals since we had so much practice time with no games.”

Staying locked in without the weekly payoff of outside competition could be a challenge for some, but that wasn’t the case for this team or this staff.

“Coach Fox does a great job of keeping the intensity and positive emotion very high for us,” Psota said. “All of the other coaches do a good job with that as well. We piggyback off their energy. All of us love football, so after having no practices this past spring, we were looking forward to being back out there.”

Although he certainly relishes opportunities to see his team take the field in game situations, one of Fox’s deepest passions remained unchanged this fall — player development.

“It’s all about player development,” he said. “We ask our players to be their best every single day. Some days may be better than others, and that’s OK. The highest priority is for our student-athletes to maximize their potential as football players, as students and as people. We’re trying to develop well-rounded individuals. It’s important for our players to have a fourth-and-goal mentality and be locked in at all times. They’re going to make mistakes, but we want them to learn from those.”

That message resonated with the players throughout the fall as they worked to stay motivated despite the adversity caused by COVID-19.

“One of the core values for our program is trying to be the best version of yourself every single day,” Annis said. “With no games, it was a grind at times. Falling back on that core value, we were able to go out there and get 1 percent better each day. That helped all of us stay positive. We added a competitive element, competing against each other during our practices and scrimmages.”

Annis got a taste of college football in a game setting as a true freshman in 2019. Thanks to a new rule allowing players to redshirt as long as they appear in four games or fewer, he saw action in four games and retained four seasons of eligibility.

“Coming in and playing in a couple games last year allowed me to experience what college football is really like and taught me how to prepare and what I need to do with regard to lifting, conditioning and watching film,” Annis said. “That’s going to allow me to be a much better player going forward. This fall, I tried to focus on my technique, tackling form, footwork and hand placement when taking on blocks. I’m trying to perfect those little things that can turn a good player into a great player.”

Psota is coming off a breakout season, finishing third on the team with 69 tackles, the most among returning players for 2020. He made a significant jump after appearing in four games and making one tackle as a true freshman in 2018.

“I would credit that to our coaching staff and to hard work both as a team and personally,” Psota said. “I’m focused on staying dedicated and not getting complacent. I want to continue to be hungry to get better. This fall, I focused a lot on the mental side of things. I worked on understanding the scheme better and being mentally tough when things don’t go my way. I used this time to fine-tune technique.”

The assessment of positive progress throughout fall camp was echoed by senior punter Ben Niesner (Black Diamond, Wash. / Tahoma [Portland State]), who is coming off an All-PFL Honorable Mention season.

“I thought the fall went well,” Niesner said. “From a team standpoint, we made huge strides on offense, defense and special teams. We learned a lot and had the chance to incorporate the newcomers into our team. We gave newcomers a lot of reps. It’s not necessarily game experience, but it’s reacting to how college flows and how football works at the college level, which will be very beneficial to our young team.”

The bar was raised from Year 1 to Year 2 of the Fox Era at Valpo, and the head coach was pleased with how his team responded to the challenge.

“This may seem strange, but Year 2 in a system can be even more challenging than Year 1 for players,” Fox said. “As a coaching staff, we understand who they are, where they are and how they fit. You understand their ceiling and their ability level, so you’re going to push them to maximize that. I tell our returning players all the time that this year it’s not good enough to know what you’re doing because how you’re doing it is even more important. I’m proud of how our players responded this fall.”

ICYMI, click here for a position-by-position review of fall camp.