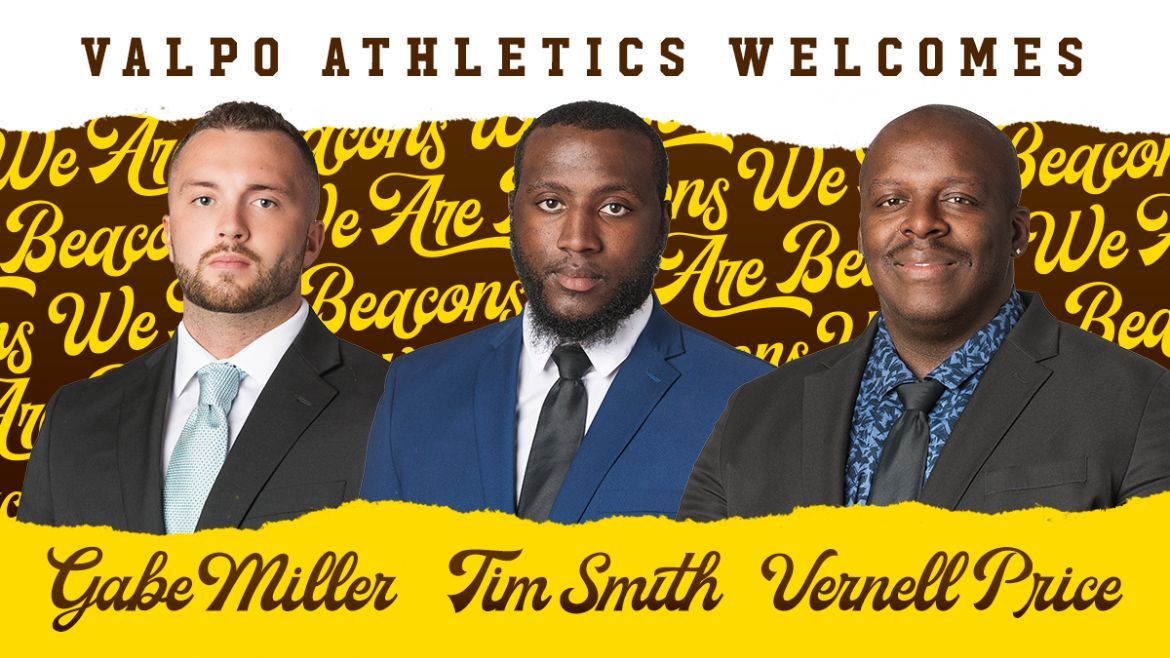 The Valparaiso University Department of Athletics has announced a trio of hires, including the addition of Gabe Miller as Associate Director of Sports Performance. Miller will serve as the strength and conditioning coach for the football and women’s basketball programs.

In addition, head coach Landon Fox has finalized two new hires on his football coaching staff as Tim Smith has been named wide receivers coach and Vernell Price has been introduced as the program’s defensive tackles coach.

“I am really excited to have Gabe joining our Valpo family,” head women’s basketball coach Mary Evans said. “Throughout the interview process, Gabe’s passion and energy for strength & conditioning and sports performance really stood out. He is extremely knowledgeable within his field and I am looking forward to watching him help our players grow as athletes.”

Miller earned his bachelor’s degree from Saginaw Valley State in May 2019 with a degree in exercise science and a minor in general business. He was a football student-athlete as an h-back and long snapper while also contributing on special teams.

“I’m very impressed by the past experiences that Gabe brings to the table,” Fox said. “He played collegiate football and he has gained experience at Michigan and Central Michigan after starting his career at Saginaw Valley. He has worked with college football programs at the Division-I FBS level. He has also been in the private sector and worked with NFL combine athletes as they were preparing for the combine. He has a variety of experiences at different levels and has a great understanding of player development.”

Smith comes to Valpo after serving as the offensive coordinator and wide receivers coach at Lincoln University in Oxford, Pa. from fall 2018 to January 2022. He previously served as the offensive coordinator at Oscar Smith High School in Chesapeake, Va. in Fall 2017, leading the team to a state championship. He was the head coach for boys varsity track & field during the Spring 2017 campaign after serving as an assistant coach the previous season. He was also part of the Oscar Smith football staff in 2015 and 2016 as the wide receivers coach.

“I am both excited and grateful to be part of the Valpo family,” Smith said. “Throughout the interview process, I could see the vision Coach Fox has for this program and the foundation that he’s laid thus far. I can’t wait to help develop this group of wide receivers, on and off the field, as I aim to instill all of the lessons, techniques and values from my past experience as a former player and NCAA coach.”

Smith’s playing career reached the professional ranks with the Edmonton Eskimos (Canadian Football League, 2016), Hamilton Tiger Cats (CFL, 2015), Cleveland Browns (training camp, NFL, 2014) and Seattle Seahawks (NFL, rookie mini-camp, 2014). He was a four-year player at the University of Virginia, where he graduated in May 2013 with a degree in sociology.

“Tim played at a high level and ranked among the all-time leading receivers at Virginia when he finished out his career,” Fox said. “He was able to get into camp with the Browns and Seahawks, and that brings instant credibility. He has a deep understanding of the wide receiver position. At his last stop, he was an offensive coordinator, so he has the ability to see the big picture of what we’re trying to accomplish on offense while also getting to focus on what he knows best, which is developing wide receivers.”

Price has previous experience in the Pioneer Football League as he spent the last year working with defensive backs and as a defensive analyst and defensive quality control coach at the University of San Diego. Prior to that, he served as the head coach and play caller for the Shanghai Sharks and Hangzhou Generals from 2016-2020. During his playing days, Price was a defensive lineman at the University of South Dakota from 2010-2012. He started his collegiate career at San Diego Mesa Community College from 2007-2009.

“Vernell is a unique story,” Fox said. “He intrigued me because of his teaching background. He’s taught at a number of different places and was in China for several years. He has experience in our league having worked at San Diego this past year. He understands the student-athlete part of what we do here at Valpo and recognizes the importance of bringing in good football players but more importantly, good students and good people.”

What They’re Saying About Coach Miller

Alex Curtis, Assistant Strength & Conditioning Coach, Central Michigan University: Gabe has good experience. He comes from winning programs and quality strength & conditioning programs at the University of Michigan and at Central Michigan University. He’s seen success at the power-5 level and the group-of-5 level. One thing that really stood out to me here at Central Michigan was Gabe’s ability to form relationships with the players. He also forms good relationships with the staff members; I enjoyed working with him and we have a great relationship. He’s a competitor. He likes to compete and it’s apparent, even playing pickup basketball, he goes all out. He brings that edge to the weight room.”

What They’re Saying About Coach Smith

Al Groh, College/NFL Analyst, Former NFL & College Coach: “Tim is a very down-to-earth person with high ambitions. He takes nothing for granted and works for everything that he gets. You can trust Tim to be prepared to give the best that he’s got every day.”

Marques Hagans, Associate Head Coach / Wide Receivers Coach, University of Virginia: “Tim is a student of the game who teaches at a high level and loves his players. He’s definitely an up-and-coming coach.”

Anthony Poindexter, Co-Defensive Coordinator, Penn State University: “Tim is a great young man. He is a very talented coach but an even better person. Any program should be excited to have him work with their student-athletes.”

Mike London, Head Coach, William & Mary: “Tim Smith was a tremendous player for us at Virginia and an even better human being. He’s one of the hardest workers I’ve been around as a player and now as a young coach. His future is bright. I’m proud to say I love Tim Smith for the man that he has become and the opportunities that lay ahead for him.”