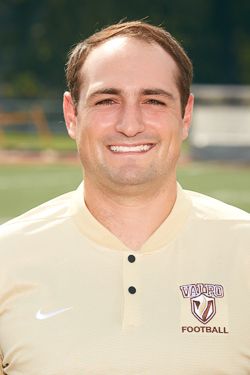 Rob Tulcin is back for his second season on the Valparaiso University coaching staff as the team’s linebackers coach in 2018.

Tulcin was on staff as Valpo enjoyed its first winning season since 2003 in 2017. Several Valpo linebackers thrived during Tulcin's first season with the program, led by Drew Snouffer (106 tackles) and Nick Turner (101). Snouffer and Turner accounted for two of the top four tacklers in the Pioneer Football League and Turner notched second-team all-league honors.

Tulcin spent the last three seasons at the University of Chicago as a defensive assistant for the Maroons. Before entering coaching, Tulcin played collegiately at Lehigh University from 2007-2010. He was a member of the 2010 team that won the Patriot League championship.

“He’s a really talented, energetic coach,” Cecchini said. “He’s very organized. He has a preexisting knowledge of our defensive scheme. He worked with Coach Moore in the past, which is a plus as well. He has a good knowledge and a head start on our scheme.”

“This was not only a great opportunity to gain more responsibility and take a bigger role within a program and to come to the Division I level, but also to work with a staff that I have some familiarity with,” Tulcin said. “I’m excited about it; there’s a lot of energy here and I’m expecting great things to come.”