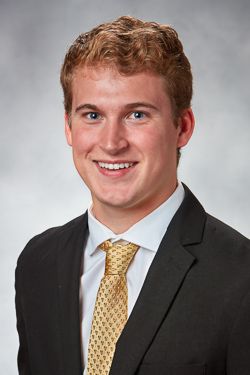 Peter Funk completed his first season as a graduate assistant for the Valpo men’s basketball program in 2019-2020.

During Funk’s first season as a graduate assistant on head coach Matt Lottich’s staff, Valpo finished with the program’s highest conference win total, highest overall win total and highest finish in the league standings since joining the prestigious Missouri Valley Conference. The season culminated with an unprecedented run to the MVC title game that saw Valpo become the first team in the 30-year history of Arch Madness to reach the final after playing in the opening round.

The Cleveland, Ohio native is a 2019 graduate of Valparaiso, where he earned his bachelor’s degree in Spanish with a minor in communication, finishing his undergraduate studies in just three years. He is currently pursuing a master’s in sports administration from Valpo. Before being elevated to his current role, Funk spent three seasons as a student manager for the program, including the 2018-2019 campaign as the head manager.